Anti Social Social Club burst into the fashion world in early 2015. It has navigated through crowded streetwear market in Los Angeles to worldwide stardom. Its eccentric and mysterious founder Neek Lurk had no ambitions to conquer the world, yet somehow managed to build a lucrative business based on “negative stuff” like mental struggles and depression. Now the brand counts Kanye West, Kim Kardashian, and Korean idols BTS as fans. Its online store is permanently sold out and the discussions about designs and messages on its clothes and accessories never cease. 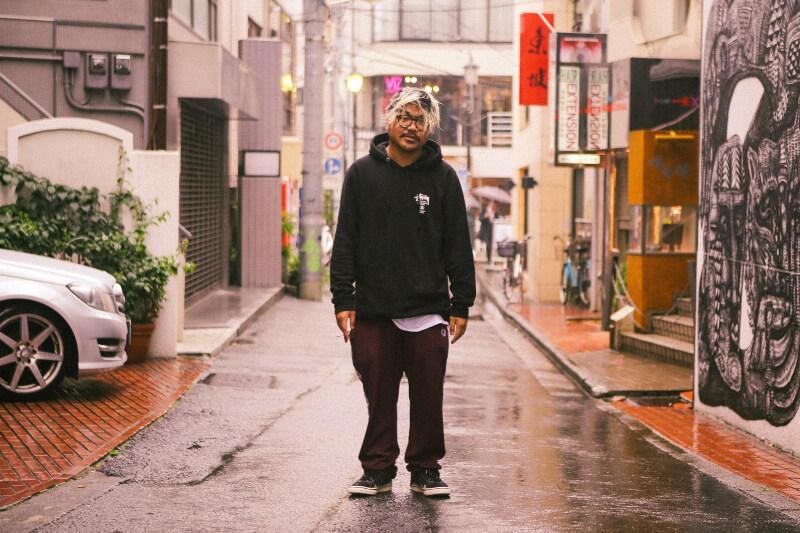 The history of ASSC does not exist without the story of its founder, Neek Lurk. Born and raised in Las Vegas, Nevada, he spent his youth on the Internet. Namely, on the NikeTalk forums in its heyday. Neek gained popularity and a reputation for posting WDYWT (What Did You Wear Today) photos. His peculiar style of big hair, graphic tees, and drainpipe skinny jeans enchanted the fashion world, and the man landed a job at Vegas’s Stüssy. Starting as a part-time hire, he quickly climbed the career ladder. Eventually, he relocated to Los Angeles around 2014 to work as social media director and brand manager. However, his loneliness and depression followed him to the new place.

The catalyst for the brand came in late 2014. It was a painful breakup with a girl that gave Neek an idea for a hat. He created a dad cap with the phrase “I Miss You” on the front and the Anti Social Social Club logo above the right ear.

In the beginning of 2015, Neek designed 12 T-shirts with the same logo. He did not even print them, but created a photoshop mock-up, shared it on the Internet, and people bought all 12 of them. So, he decided to go on. His target audience was close friends but, piece-by-piece, these melancholic statements started to resonate throughout LA. And then a spontaneous tidal wave of hype propelled Anti Social Social Club straight into the forefront of streetwear before Neek could wrap his head around how and why. 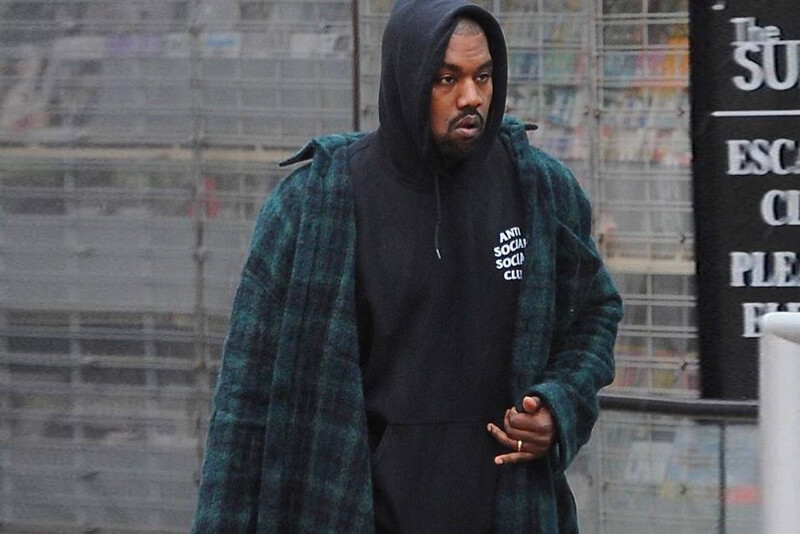 The wave generator was Kanye West. Only three weeks after the brand launch, Yeezy was spotted wearing the ASSC hoodie. Neek's shop, hosted on the Big Cartel platform, had seen a traffic surge of up to two million visitors in a single week. Kim Kardashian donned the “I Miss You” hat a couple of months after it was created, at New York Fashion Week. Travis Scott was seen rocking an Anti Social Social Club green cap to Future’s album launch party for DS2 in New York. The hype machine began turning and is not going to stop. The list of celebrities wearing a brand grows larger day by day: Rita Ora, Cara Delevingne, and G-Dragon, to name but a few, have joined the club. The brand has catapulted to heights no-one had expected and its items sold out in mere minutes.

The meteoric rise of ASSC occured offline as well. In 2016, Los Angeles saw the brand’s first pop-up with the giant painted words “Get Weird.” Fans finally got a chance, however rare, to buy the coveted hoodie in-person; the lines are comparable to Supreme drops, even if the location is encrypted with Morse Code. The Anti Social Social Club went collaborative and created capsules with retailers like RSVP Gallery and Dover Street Market, high-profile brands like BAPE, crazy popular K-pop boy band BTS, Hello Kitty, Playboy, and more. 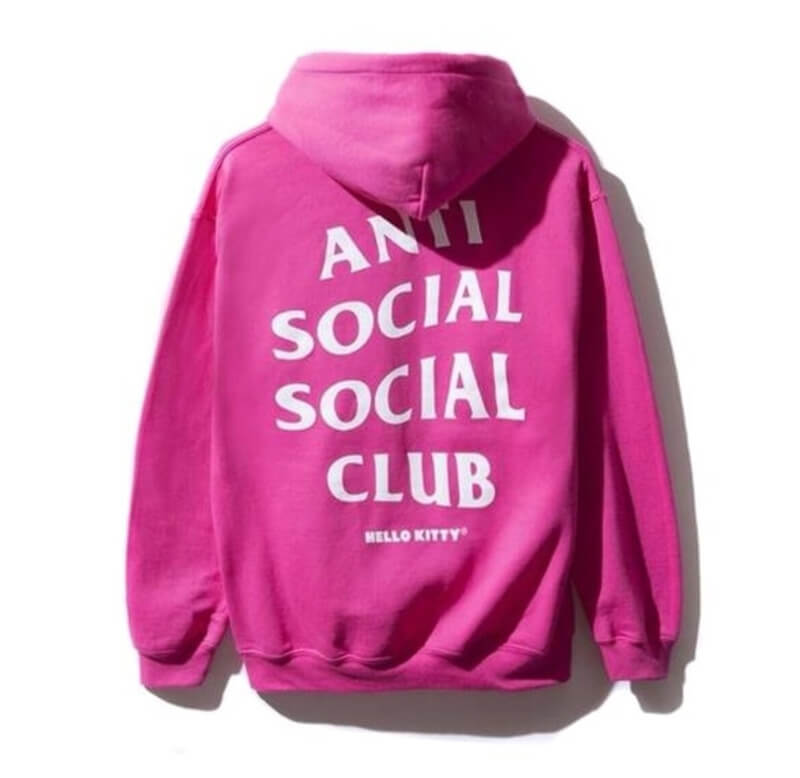 There are a lot of apparel companies that promote ideas of a race to success. But, Anti Social Social Club is not one of them. The clothing brand constantly speaks of isolation, loneliness, and mental health issues, and appeals to the darker corners of the mind. It is well-known for bold and melancholic phrases, like “Self Doubt”, “Give me happiness gives me pain”, and “Fuck everyone it’s just you in the end.” On the other hand, with slogans such as “Get Weird,” ASSC celebrates imperfection and self-acceptance.

Neek Lurk says his creative process is fuelled by his manic and depressive states. He translates his ever-fluctuating mood into clothes, and herein rests the goldmine. This melancholia is the antidote to hyper-sexualized coolness that puts pressure on the younger generation. This antidote is sold in a form of unisex hoodies and dad caps with an iconic wavy logo.

The Club uses unorthodox marketing strategies. Its aesthetic is minimal and genderless, its website is abstract and bare, and there is little to no product information. All these generate an elusive fleur around the brand and draw curiosity. And, of course, the brand ignores typical seasonal collections and releases in drops instead. The drop may contain up to 100 different items, and they’re not only clothes - everything from a trash can to a rice cooker with an ASSC logo.

Even though Anti Social Social Club is thriving, the discussion around the brand is not always positive. Neek is still the only person operating the Club, which leads to some problems with logistics. It is close to impossible to get the order quickly and in good condition. The customer service is notoriously bad, and the only place you can leave a complaint is the brand’s Instagram with the #wheresmyhoodiebro hashtag. You can find tons of them under every post. The shipping sometimes takes a year. Two years ago, Hyperseast reported that ASSC owes their merchandise to at least 1,320 customers, with the average value of $380 per order. This is close to half a million dollars of debt. It definitely sullies the reputation, but in turn heats the hype even further. The reddit community is outraged. On the other side, if it were easy to buy and quick to receive, would this brand remain so cool? 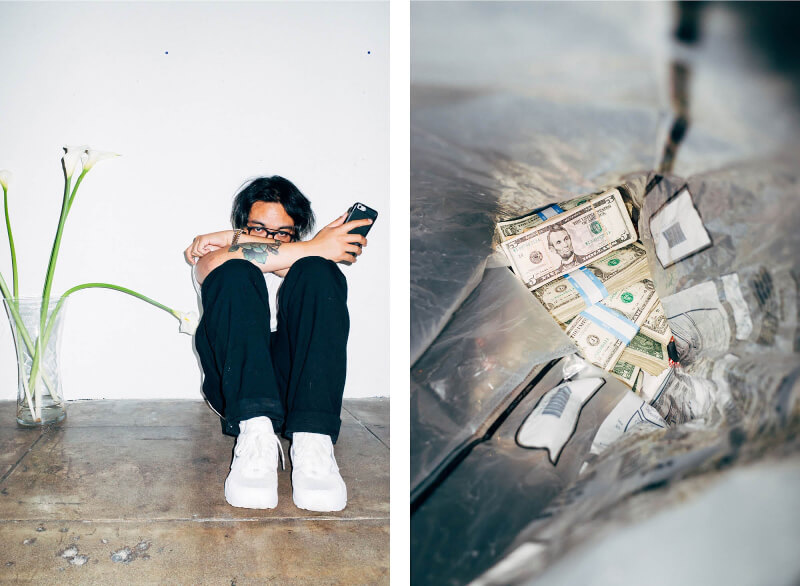 Neek knows how to work with the negative – he uses it for inspiration. He took the criticism head-on and released an “Eye Hate Neek” shirt with the Spring/Summer 2018 drop. Controversial items and messages continue to get his fans excited; Neek's nonchalant approach may piss a lot of people off, but this is how he stays authentic despite the critics. His main goal is not to sell t-shirts, he aims to express his feelings into tangible things.

Moreover, the quality of ASSC clothes is far from luxury. Its hoodies cost around $70 but are printed on blank Gildan apparel, which many low-key brands use as well. A lot of fans opted for replicas printed by the same supplier. They’re cheaper and the shipment is quick. According to Fupping, the fake market conquered 35% of ASSC’s income in 2018.

In the early days, Anti Social Social Club printed on essentials like t-shirts, hoodies, and caps, but the fans’ hunger for anything bearing the logo expanded the offering to weird things. Blankets, ashtrays, and even sex toys can be bought on the official website. Or, could be, if it were not always “out of stock.” The brand doesn’t have a regular schedule of drop, as Supreme does. The only way to know about a restock is to follow the Instagram closely.

In most cases, the only way to get ASSC clothes is to go for a resale market. For example, Sole Stage has a legit hoodie from a new collection for $119 dollars. A bit more expensive than the official price, but you can actually get it here and now. This retailer also has physical locations in Los Angeles, New York, Irvine, and Beijing, so you can go and try it on. 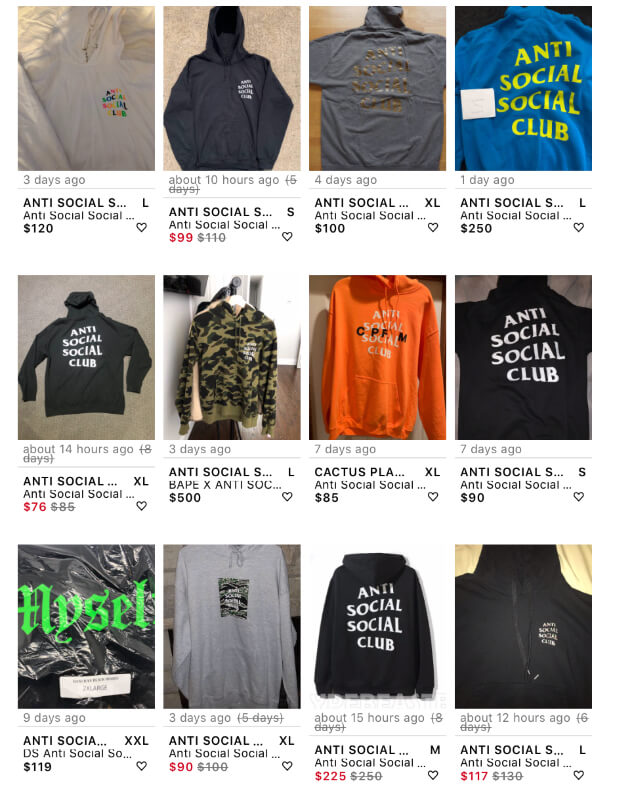 You can also check the marketplaces like eBay, Depop, and Grailed, where people resell their clothes (sometimes used, but more often new and by hyped brands). For example, a yellow hoodie from FW 2019 collection is $132 on Grailed. The “stock market for things” StockX also has a decent ASSC offer - the price here is based on bid and ask.

Other trusted websites to buy Anti Social pieces from are CopVsDrop, Kix Files, and Vestaire. Buying from Instagram sellers is usually a gamble of getting scam for a full piece. You probably won’t tell the difference, though. 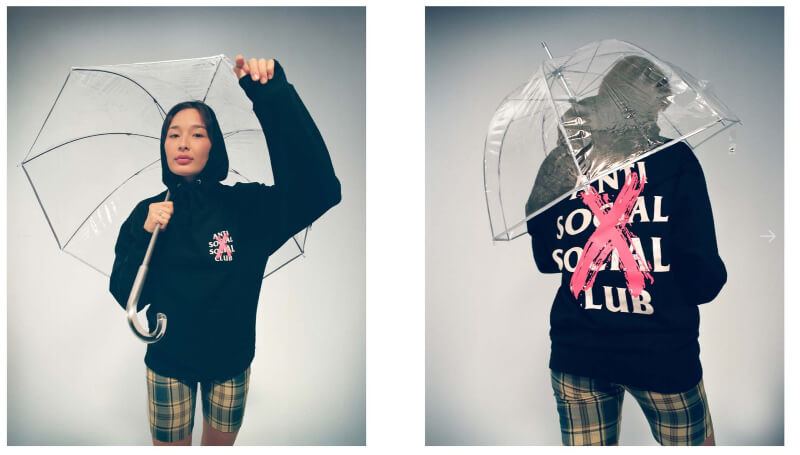 Despite all the controversy, Anti Social Social Club is still on the top of the streetwear world and continues to team up with other successful and hyped brands. The Fall/Winter 2019 collection was presented with an all-female lookbook. Aside from colourful hoodies and tees, and colabs with Playboy and Honda, it features an unconventional collaboration with Korean rice cooker purveyor Cuckoo to “elevate you cooking experience”. Other off-kilter items are frisbees, box tapes, grinders, and boomerangs, to name a few. Face masks, flip-flops, and umbrellas are already regulars in the brand’s drops. Of course, each item is embellished with ASSC’ motif. The collection is titled “Still Stress”, which summarizes the brand’s philosophy pretty well.