The story behind the Astroworld hoodie trend 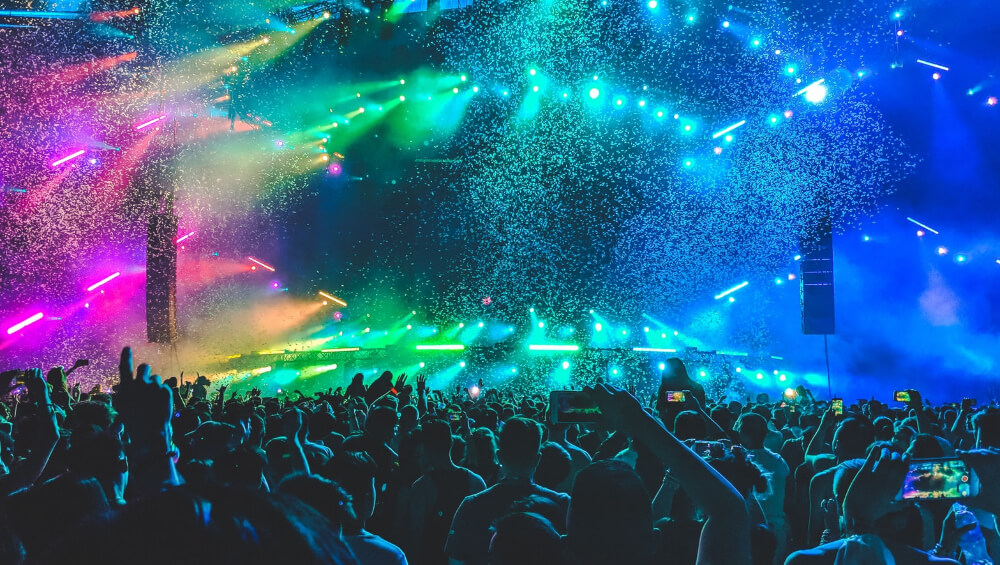 “Astroworld” written with colorful letters on a black hoodie. The design seems simple even plain, but the price tag makes you surprised. However, the Astroworld hoodie is one of the most desirable things on the Internet. It is always sold out on the official website, and one has to hunt for it on the secondary market for double the price. Manufacturers of cheap replicas take huge advantage of this buzz. Let’s see how this item became so popular. Here is the story behind the Astroworld hoodie trend.

How Does Merch Help Travis Scott to Win the Charts? Astroworld hoodie history.

Astroworld hoodie is a merch by American rapper, singer and songwriter Travis Scott, released to support his namesake album and tour. Born Jacques Webster, he moved from Houston to New York after dropping out of college and spent some time trying to be a hip hop producer. After five years of moderate attempts, he finally gained limelight in 2012, when he signed a deal with Epic Records and then with Kanye West’s Very Good Beats. 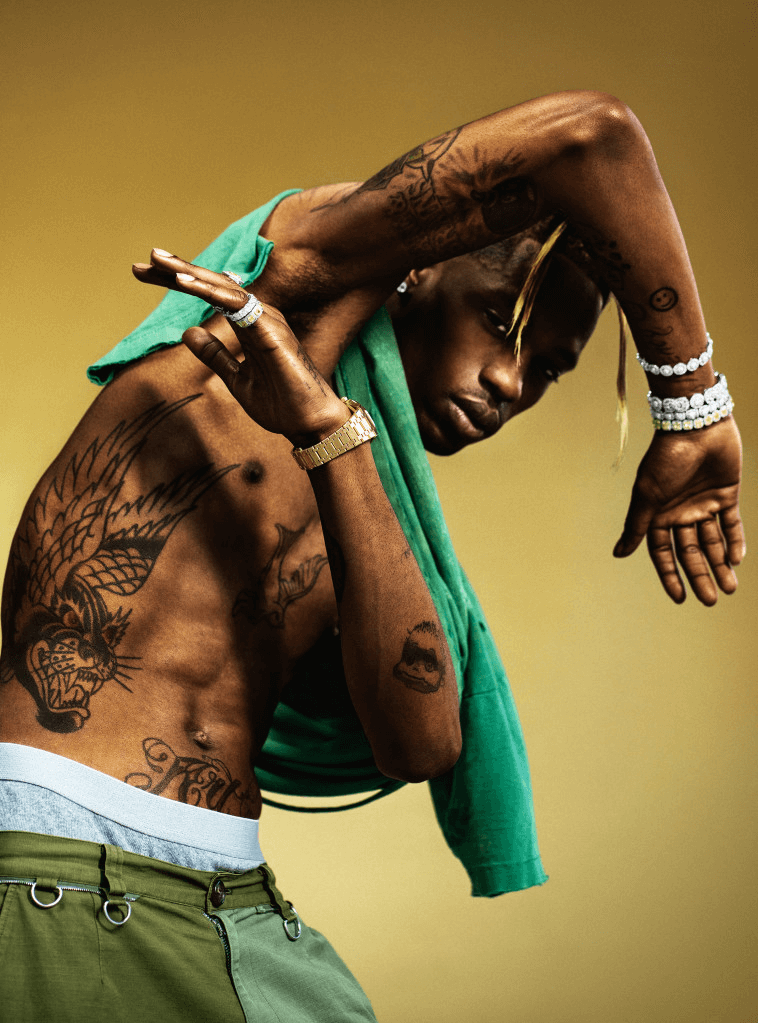 He made his big debut with the full-length mixtape Owl Pharaoh in 2013 and did not take any breaks since then. The second mixtape Days Before Rodeo came in 2014. It was so successful that the rapper had to add second shows of The Rodeo Tour in some cities. The tour of spring 2015 made Travis Scott a sensation. He had collaborations with the most renowned stars; Kanye West and Chris Brown made guest appearances in his shows. So when the album Rodeo was released later that year, it catapulted Scott’s career to a glorious future. The Antidote single reached the top 20 in the US Billboard Hot 100 chart.

The second album Birds in the Trap Sing McKnight reaffirmed Scott's dominance as a rapper and singer. But the peak of this career as for now is his third album Astroworld, which debuted at number one in the Billboard 200 in 2018. The Rolling Stone described it as a “mix of despair and hedonism”. Ellen DeGeneres in her show called Scott “the voice of a generation”.

The album is of the perfect quality and resonates with many people. But there is also one thing that helped it to reach the top of the charts. It is merchandise. Each item — from hat to hoodie and so on — came in the bundle with a digital copy of the album. So no surprise the audience’s hunger for T-shirts transformed into hundreds of thousands of downloads. And this, in turn, pushed the Astroworld up in the charts. 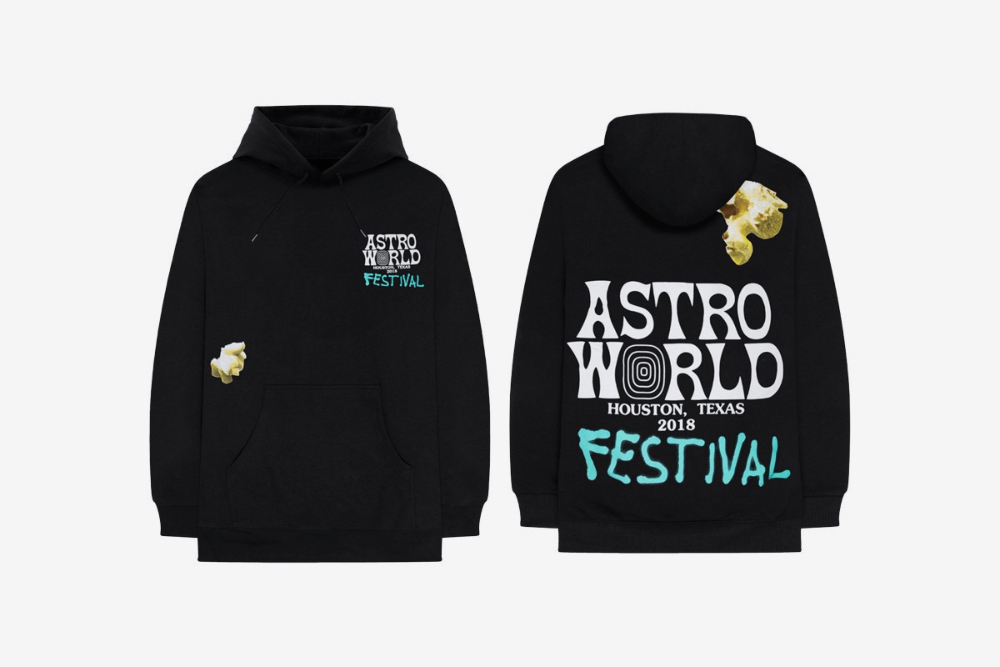 Astroworld hoodie. Merch for 24 Hours Only

It all started on August 1, 2018. Travis Scott announced on his twitter that the first drop of merch themed after his highly anticipated album had arrived and can be purchased on this website for 24 hours. The whole 28-piece collection was released by drops over nine days. Each item was available only for a limited time. 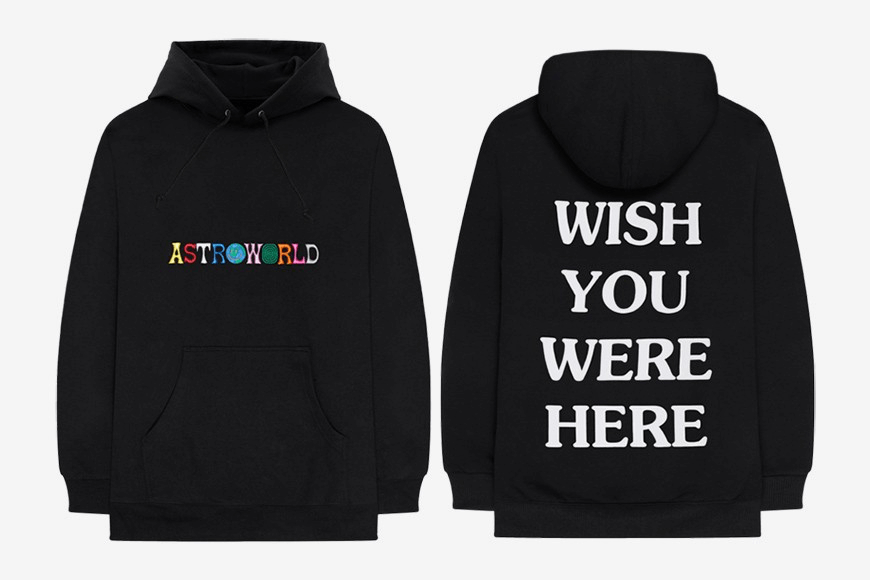 The iconic Astroworld hoodie is not the only design

The capsule included a variety of t-shirts and hoodies, hats, pants and jackets featuring vibrant graphics, playful quotes and other references to the rapper’s album. Most of the logos are embroidered, not printed. And of course, each purchase came with a digital album (released on August 3rd) and early access to tickets for an upcoming tour.

On the last day, August 9, the whole collection was restocked and it was a blast. But the prices were no sleaze as well, starting from $13 for a physical CD to $374 for a denim jacket.

The release price of the hoodie was $95 dollars and the secondhand market has doubled it. It seems crazy if not criminal to sell merch that expensive, but in fact, it has become usual among hip hop superstars. Kanye West’s tour shirt costs $90 dollars as well.

Probably, an artificial scarcity made it so: limited production of its most popular and unique items keeps supply low and demand sky-high. The quality of design and item itself does not matter when you want to show your support to the rapper and are afraid to miss the limited items. The most dedicated fans even used special bots to know first about the drop and to get what they want. Ant the most crafty users buy in bulk for the gray market. 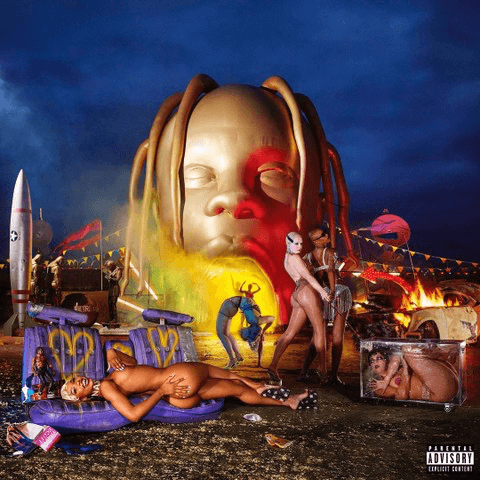 If you missed it on the website, you can always buy merch at the concert. Travis Scott’s has thrown a fantastic celebration on the place where the Astroworld amusement park was. The park in Houston was closed in 2015, and since then Scott dreamed about recreating it. So he organized his concert as a festival with a Ferris wheel and a drop tower, and two stages with amazing rappers. With the ticket price ranging from $150 to $650, 40,000 people came to the festival. And of course, the merch was sold out.

For his other shows, Scott has built animatronic eagles and rideable roller coasters. His idea is to revive the spirit of Astroworld, his favorite entertainment as a child.

Travis Scott’s live shows are considered one of the best concerts hip-hop has ever seen. But it is not only music that he is admired for. Scott is one of the most influential fashion figures. He was invited to numerous collaborations from Nike sneakers toRees’ Puffs cereal. All the things he touches sells out within seconds even if the price tag is above the sky. Eg, a cereal box can cost $50 apiece.

As for Travis Scott himself, he remains authentic over time. He prefers to wear Supreme t-shirts and Air Jordan sneakers, the same as six years ago when he first came to fame. But he also seamlessly combine streetwear with luxury things. And of course, he often rocks his own merch, stirring up its popularity even more. 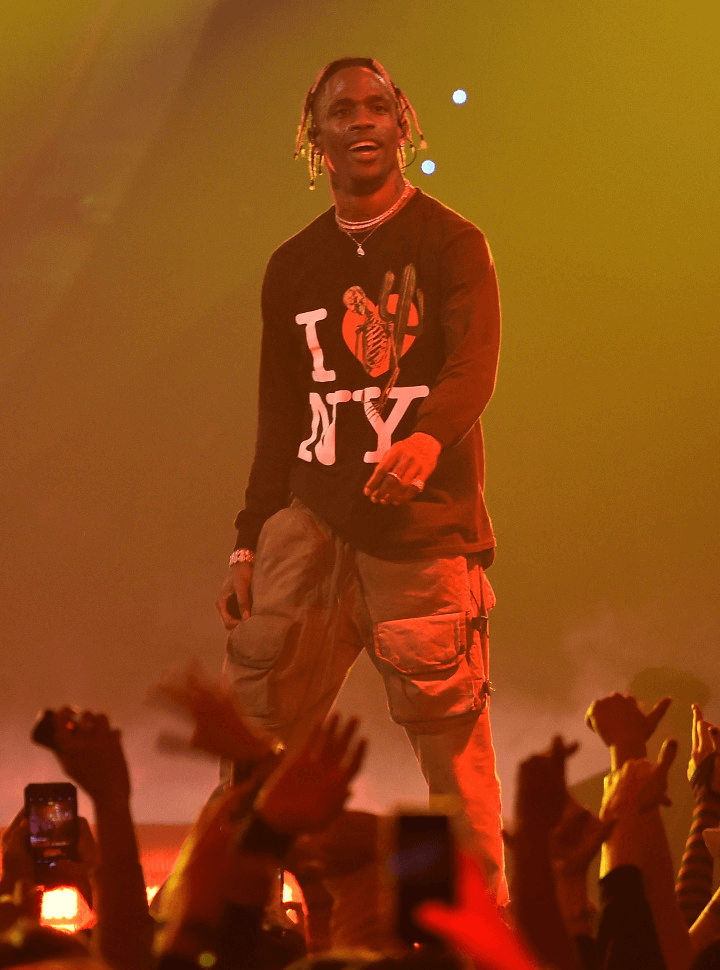 Astroworld merch always comes in small batches, but from time to time Travis Scott creates something new for his fans. For example, in February 2019, he collaborated with collaborated with Dover Street Market. The limited collection had tie-dyed and black hoodies, shirts and a beanie. Most of the seven pieces also had words Wish You Were Here. The capsule was created to celebrate another Scott’s sold out night at The Forum for his Astroworld tour. Prices range from $65 to $165, and of course, the pieces were available for a short time only. 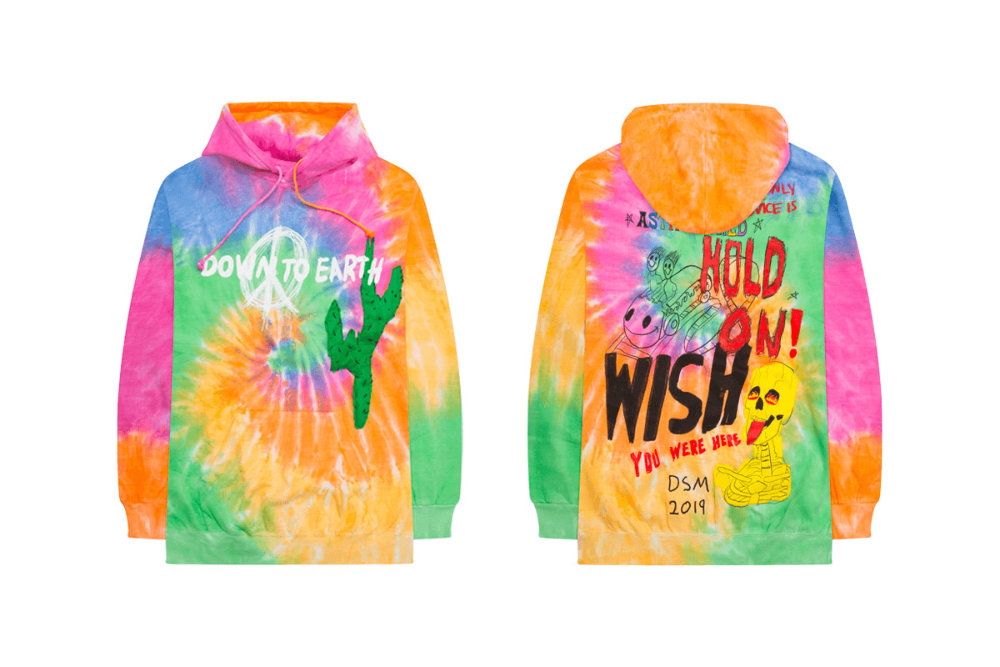 He sometimes even restock the previous collections, but only for 24-hours again. Moreover, he does pop-ups. In March, to celebrate the third sold-out in Madison Square Garden, Scott launched three short-lived shops in NYC. The exclusive merch was available only for a weekend in selected locations. This capsule featured similar elements as previous drops with some twists like earth-inspired tons and star drawings. 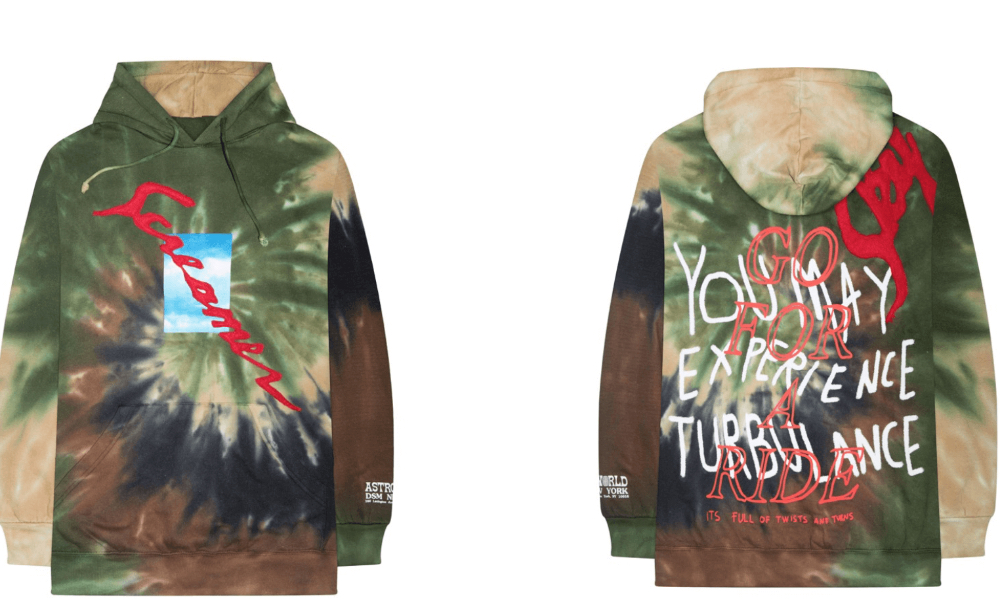 Where to Buy an Astroworld Hoodie

To buy official Travis Scott's merch you should either go to his concert or wait for another drop at the official website and be fast. But what if you want a hoodie from previous capsules? There are two ways: official and expensive or cheap and questionable.

The secondary market for Astroworld merch is huge. Prices rise twice. A tour shirt can cost up to $100, and a hoodie - up to $300 bucks. You can search for the coveted design at Depop, Grailed, stockX or eBay. 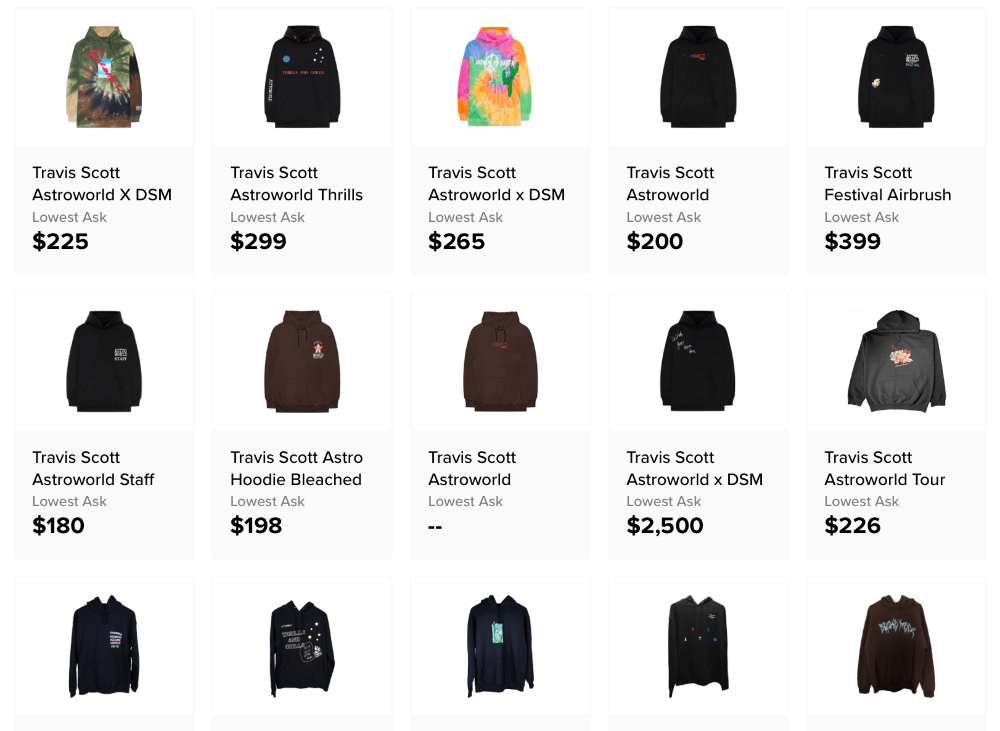 A screenshot of the "Astroworld hoodie" search results on StockX.

There are also plenty of shops with Astroworld replicas. Pieces they offer are not legit, though look pretty much the same. The most famous one is Astroworldstore.com. The prices are lower than for the originals, but not the lowest. A classical hoodie cost $75. Fashion Reps subreddit has plenty of ideas on where to get clothes that look exactly the same. You can also find some tips on how to identify a fake there. For example, the letters on the original hoodie are embroidered, not printed, the embroidery should be clean, material and seams should be of perfect quality.

If you are very low on budget, visit Amazon or Aliexpress. You can buy a printed hoodie for 20-40 dollars in any color. 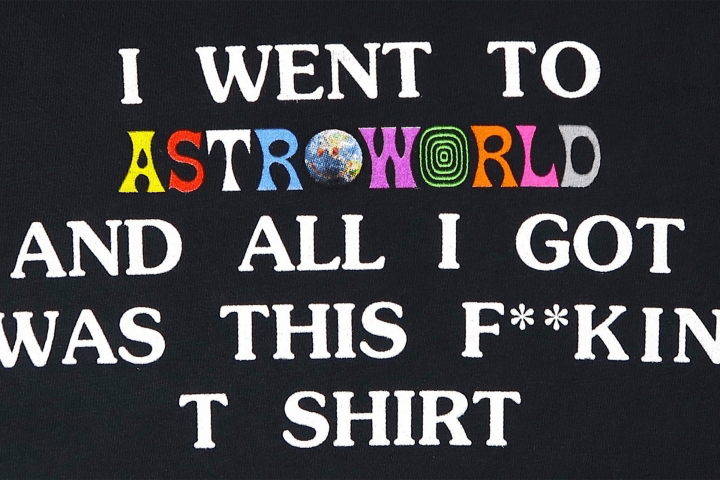 Hip-hop stars brands have become synonyms with haute couture fashion houses in terms of luxury. With popular artists like Tailor Scott, the design really does not matter. Millennials are eager to splurge on the brand rather than design or even quality. For lots of young people, the impression they give and the attention they get are well worth the money. These tees and hoodies have become a way to prove oneself as an artist's fan or just as a trendy person.