Catchy songs, spectacular performances and admirable personalities. Korean boy band BTS has taken the world by storm capturing the hearts of millions around the world. Even those unfamiliar with K-pop can hardly ignore them. Time magazine named the boys among the 25 most influential people on the internet. Over recent years, BTS has set records for music charts, sold-out world tours and stadium concerts and received numerous prestigious awards in the US and Asia alike.

BTS stands for Bangtan Sonyeondan, which is Korean for Bulletproof Boy Scouts. Recently, they also took the name Beyond the Scene as part of their new identity.
Seven members of the band were selected by audition and brought together by Big Hit Entertainment. After a debut in 2013, BTS rocketed to stardom, first becoming the hottest act in Korea, and then winning the world one hit at a time. The first members were recruited from the underground hip-hop scene, so the band started in an unusual niche: as a 90s gangster rap band. Now, they have songs in various genres from R&B ballads to house dance. 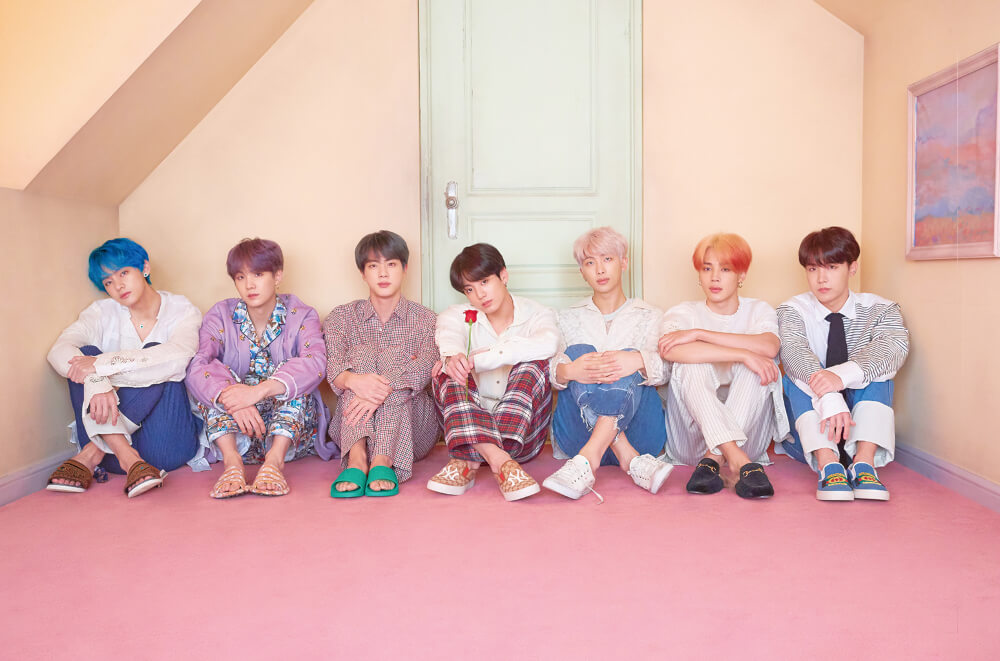 Rap Monster, or RM (Kim Namjoon), is the group leader, producer, and main rapper. He is also the group’s spokesperson, as he speaks Korean, Japanese and English.

Suga(Min Yoongi) used to be an underground rapper before joining BTS, as well as RM. Now he is also a rapper and producer.

J-hope (Jung Hoseok) was a well-known street dancer in his hometown. In BTS, he is the main dancer and lead rapper.

Jin (Kim Seokjin) is a vocalist and the official visual of the group. Producers spotted him out on the streets. He was just a university student.

Jimin (Park Jimin) is a vocalist and the main dancer. He was studying in an arts high school to become a contemporary dancer.

V (Kim Taehyung) is a vocalist and lead dancer. He went to the audition to accompany a friend, but his friend did not get a spot.

Jungkook (Jeon Jungkook) is the main vocalist, lead dancer and often the center face. He auditioned for the talent show Superstar K, and though not selected, he received several offers from other companies. After seeing RM, he accepted the invitation from Big Hit Entertainment. 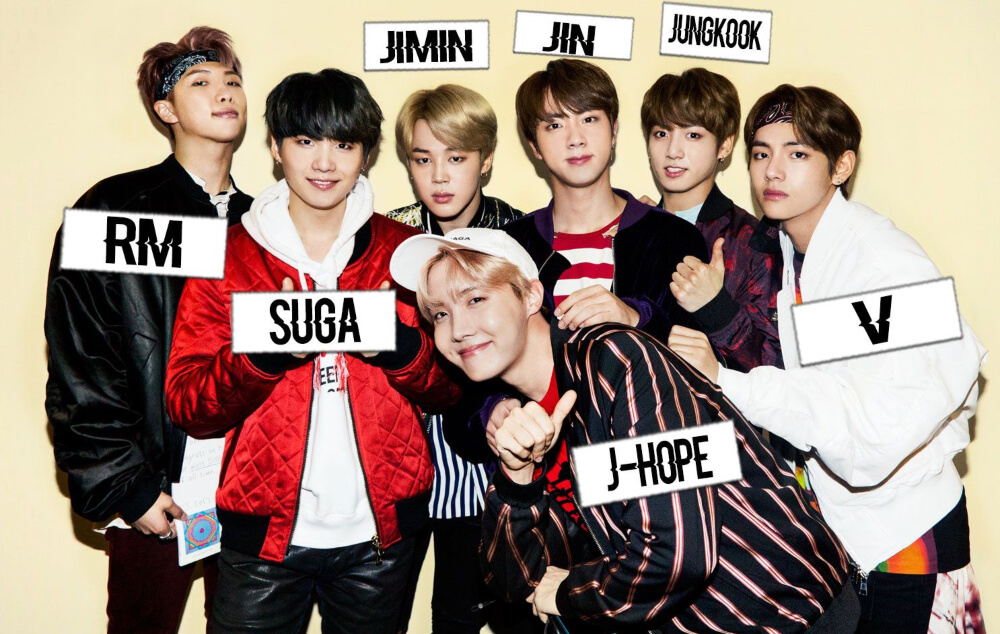 BTS are constantly evolving their identity, making their albums standalone statements. The School trilogy was followed by the Most Beautiful Moment in Life, Wings and now Love Yourself series. Love Yourself: Answer album has topped the US charts so fast that even South Korean President Moon Jae-in congratulated the boys on Twitter. Map of the Soul: Persona is the latest EP as of spring 2019. It precedes the band’s world tour Love Yourself: Speak Yourself.

Though their music is in Korean and Japanese, BTS are extremely popular in the US. In 2017, they won Billboard Top Social Artist. Their ARMY collected 300 million votes online for them to win that award. Millions of BTS fans call themselves Adorable Representative MC for Youth (thus ARMY) and actively engage with the group’s social media. BTS has over 20 million followers on Twitter and 18 million on Instagram. Moreover, the band made it to the recent edition of Guinness World Records twice for the most Twitter engagements (over 300,000 interactions with each tweet on average) and for the most viewed music video online for the first 24 hours. “Idol” was watched 45 million times in one day. 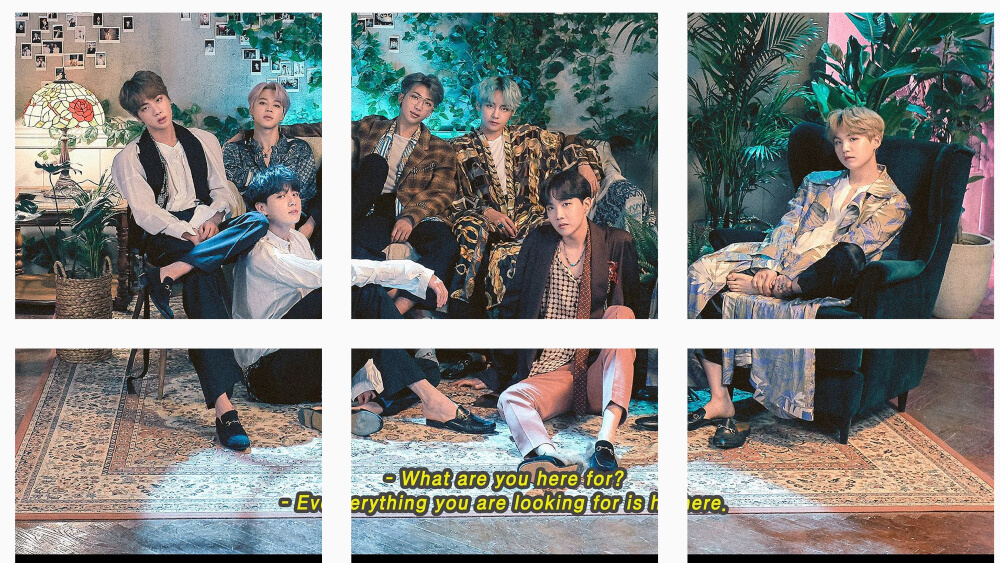 The recognition comes from authentic songs and smooth moves, but also from the way the band interacts with the fans. They are open and honest on social networks, trying to show their real daily life and human joys and sorrows. The boys post regular updates from behind the scenes: sincere messages, heartfelt photos and funny videos. Twitter, YouTube and Korean streaming platform VLIVE are the social media platforms the boys use the most. Fans can feel close to them and see them as friends, not as a distant fantasy.

BTS put their fame into action by engaging with social campaigns. They became the first K-pop band to address the United Nations in September 2018. RM spoke about overcoming insecurities and urged other young people to believe in themselves. Since then, the band has raised about $1.5 million for their UNICEF campaign “Love Yourself.” Moreover, BTS are the youngest recipients of Korean Orders of Cultural Merit, usually awarded to veteran artists.

We prepared a list of 20 most popular BTS hoodies. They showcase the group members, songs and tours. They will make a great gift to ARMY members and anyone who wants to show their love and support for Bangtan boys. 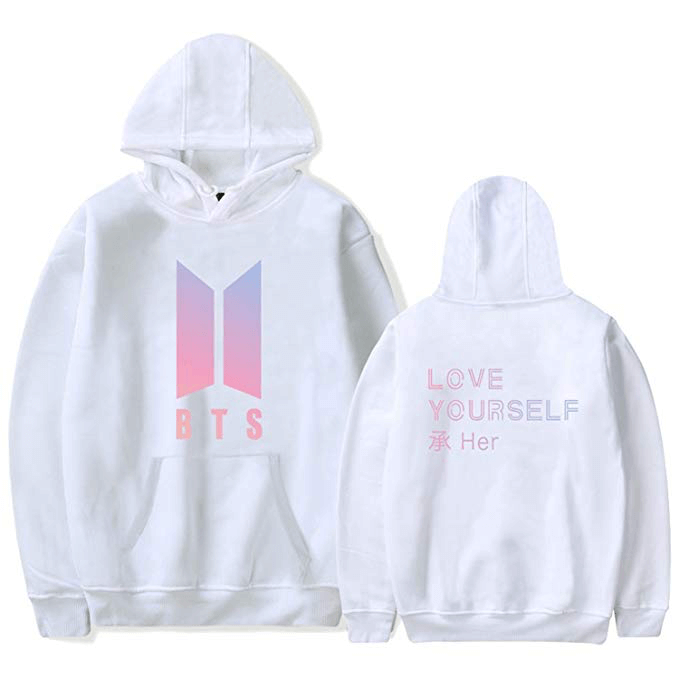 This hoodie is available from different shops on Amazon and in different colors. But it always features the pink logo on the front. Love Yourself: Her is the group’s recent album, the first one of the new series. It was pre-ordered more than a million times. 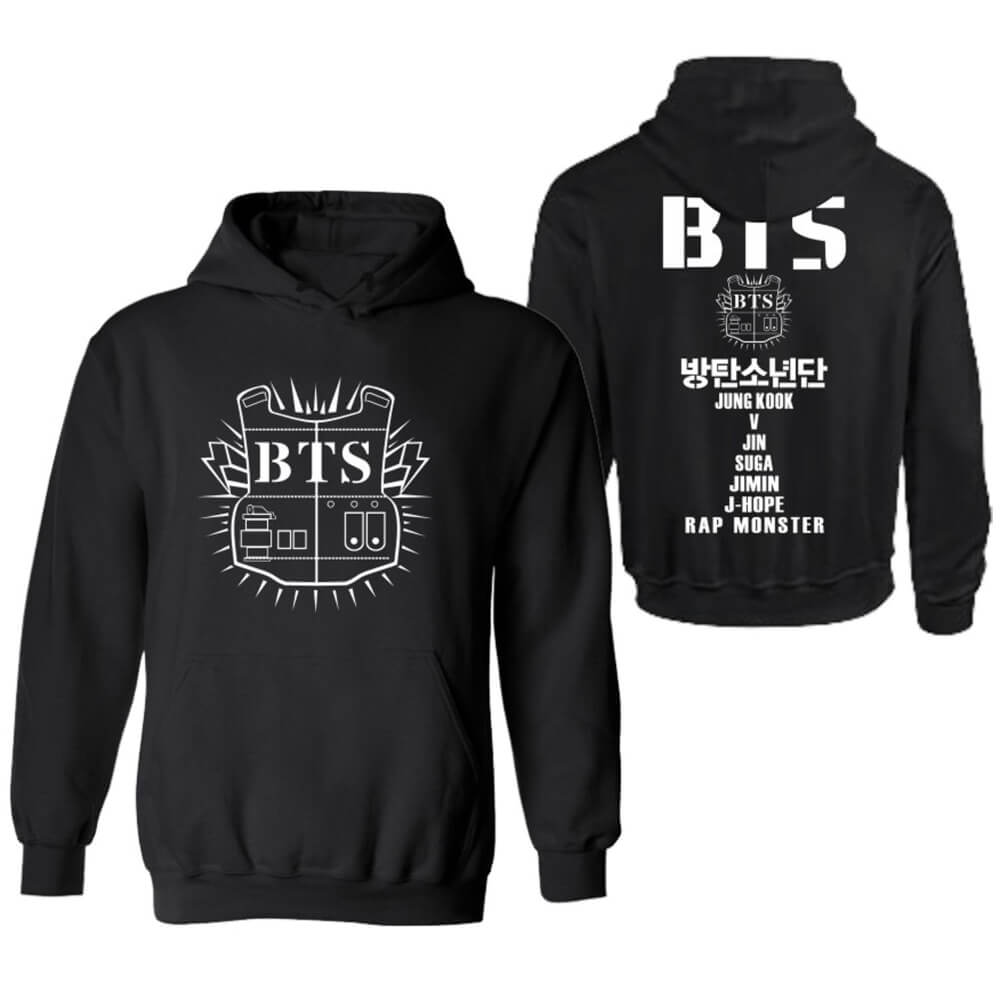 BTS announced they changed the logo in July 2017 but some fans still miss the old one. It featured the brand’s name on a bulletproof vest. This hoodie also features the boys’ names on the back. The material is 70% cotton and 30% polyester. The seller says delivery takes one to two weeks. According to reviews, the sizes run small. 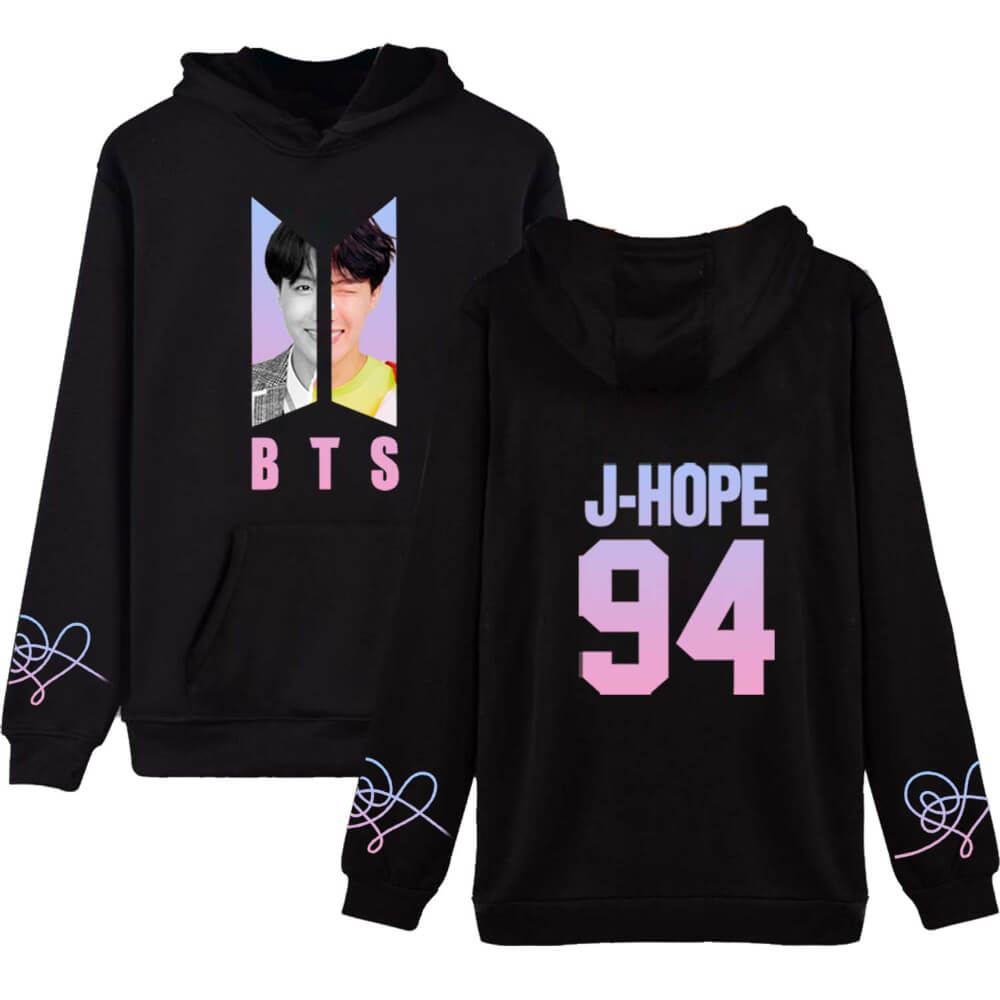 This hoodie features a member’s portrait inside the logo as well as his name and birth year on the back. By the way, the new logo symbolizes doors and means that BTS is meeting their ARMY, protecting youths from prejudice, inspire to move forward and chase their dreams.

4. Map of the Soul: Persona. Crop BTS Hoodie with Ears 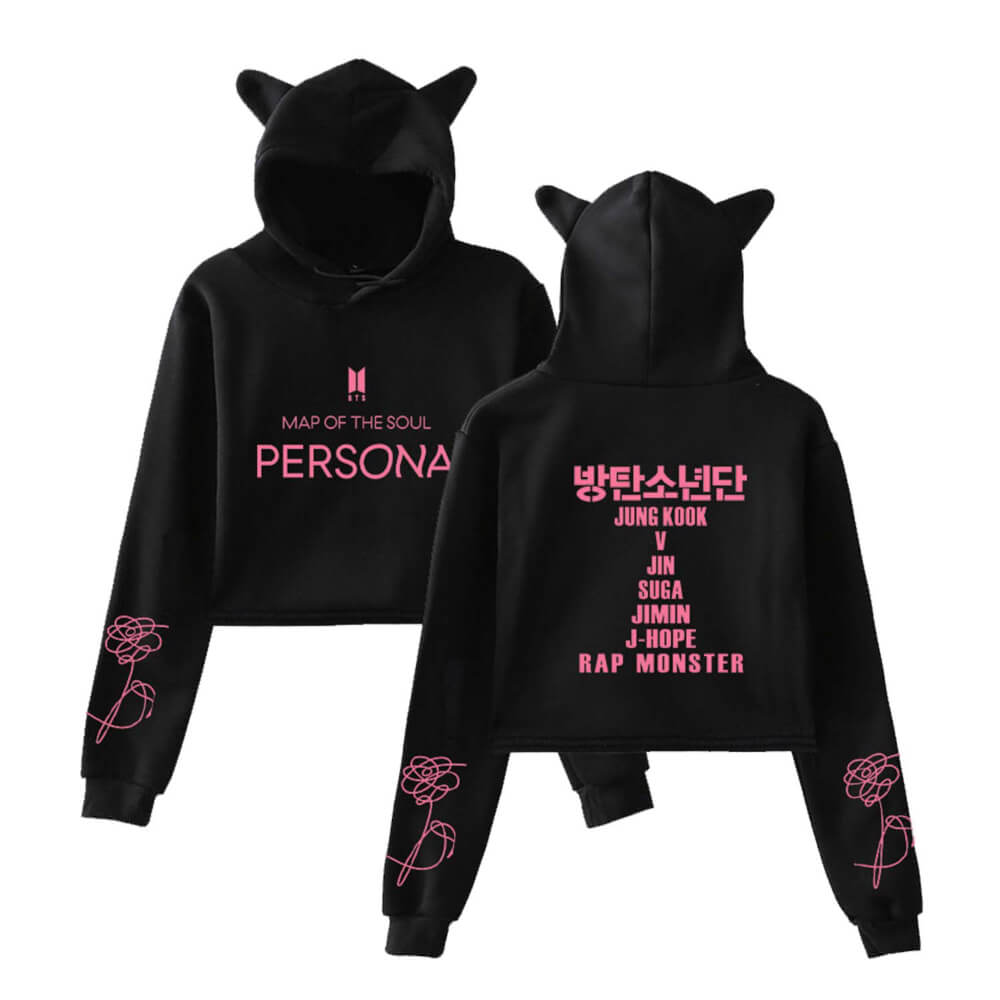 This hoodie is devoted to the recent EP and the 2019 world tour Love Yourself: Speak Yourself. It also features the boys’ names on the back, drawings on sleeves and unusual hood design. Available in various colors. The crop top can also be designed with a single boy’s name or another album logo. 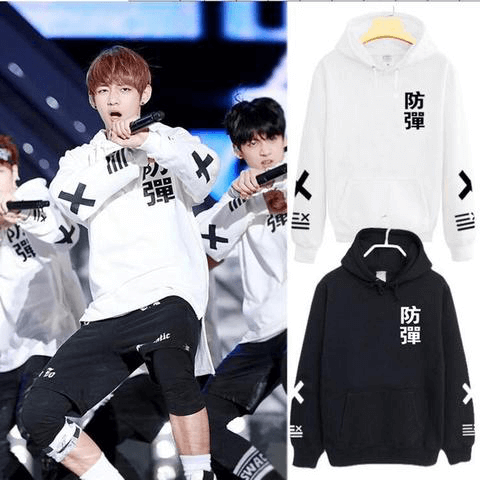 Boys wore the same hoodie at one of their concerts. It says Bantang in Chinese characters, which means bulletproof. These hoodies unlike many others are made in the US and Europe and took up to 20 days to deliver. 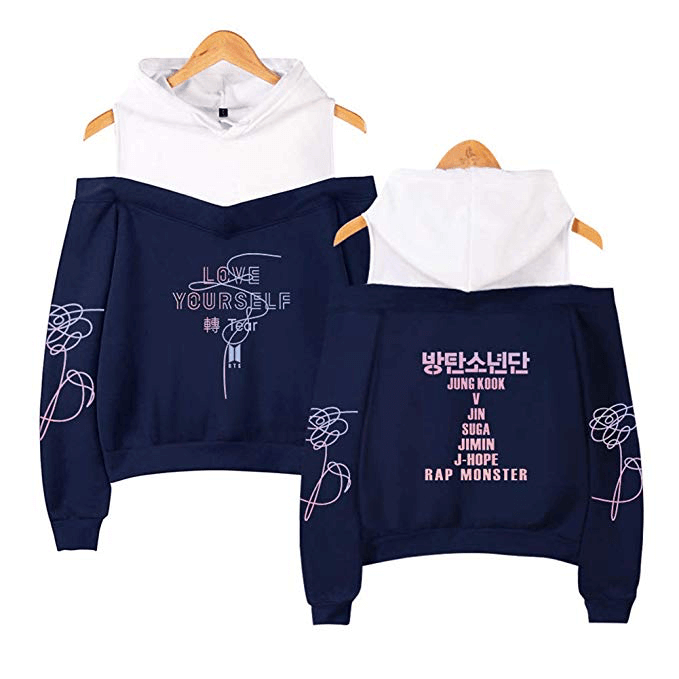 A fancy off-shoulder hoodie for warm weather. Available in various colors and designs, which can feature album logo or photos and names of BTS members. Material: 65% cotton and 35% polyester.

7. Love Yourself: Tear Pullover with a Picture 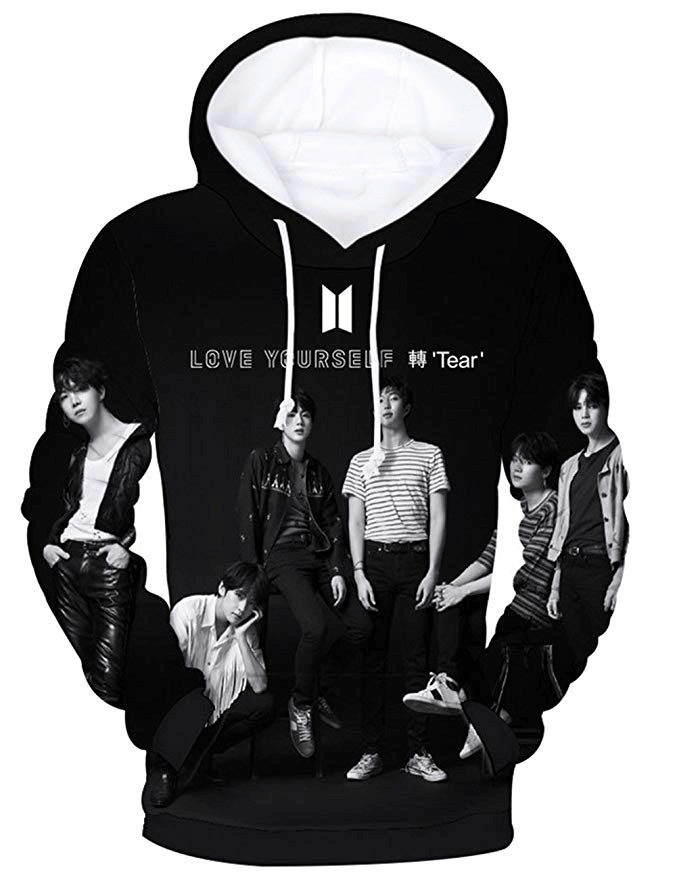 Group photo of Bantang boys is plastered across all the hoodie. The material is said to be warm cotton, comfortable for sport. You can choose different photos. 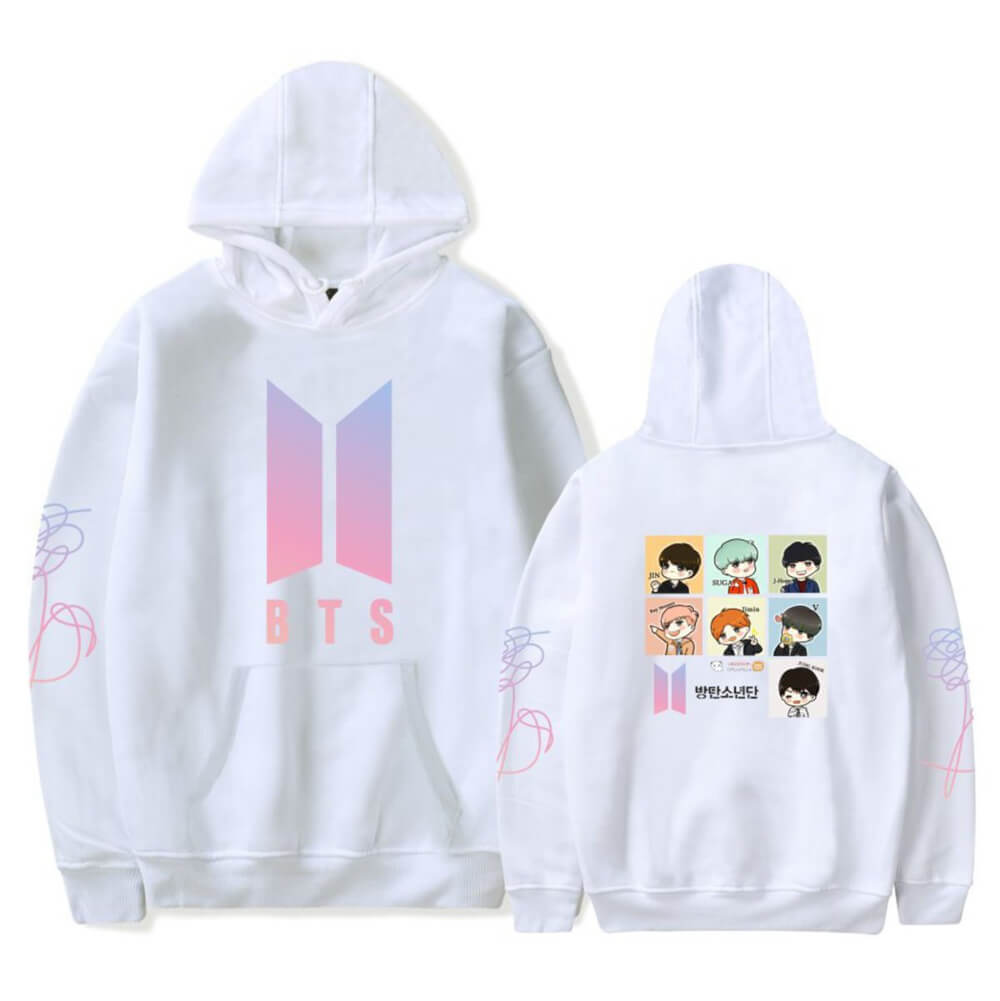 This hoodie is similar to the first one, but it has pictures of all the members as cartoon characters and symbolic drawings of Love Yourself series on sleeves. The material is said to be thinner than a normal hoodie, almost like a T-shirt. Available in six colors. 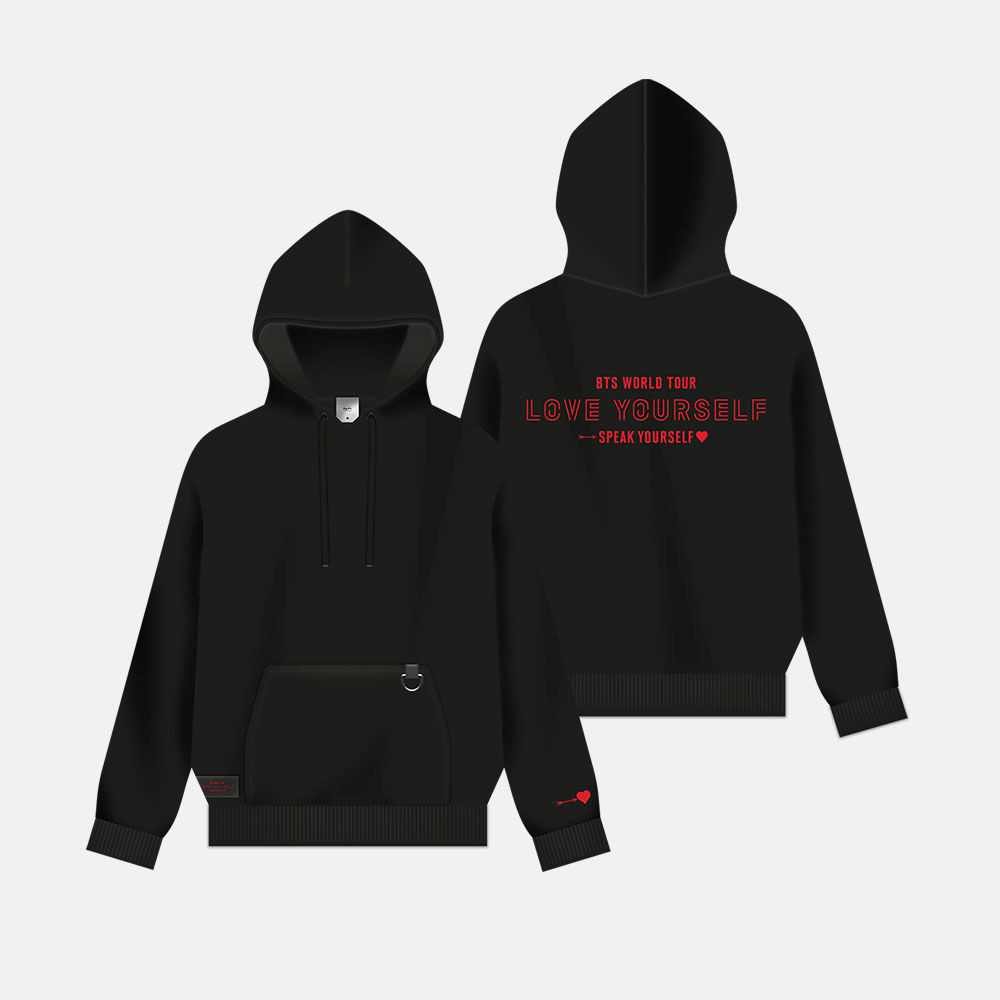 This hoodie is a lot more expensive because it’s from the official website of Big Hit Entertainment. It features Love Yourself: Speak Yourself tour logo on the back and little heart on sleeve. The hoodie is made in the USA with 80% cotton and 20% polyester. The website is partly in Korean so it’s better to check the delivery area. 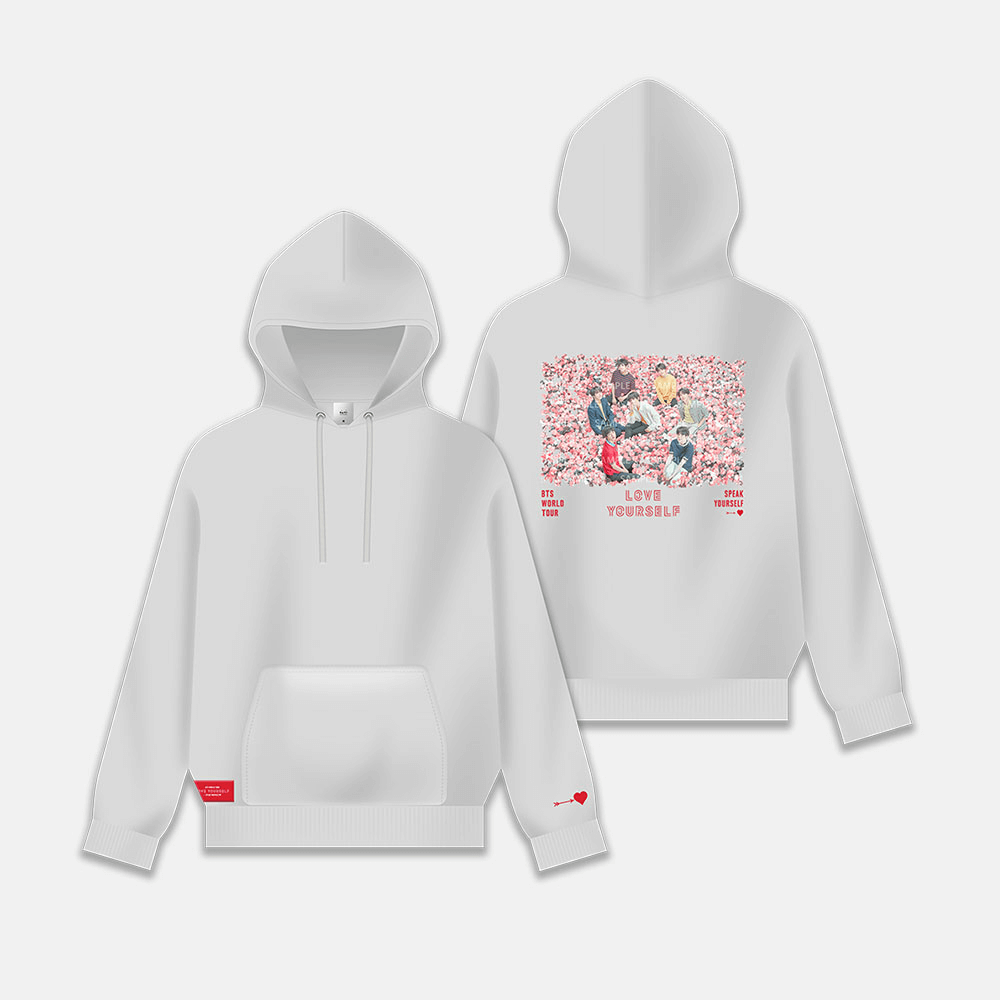 This hoodie is of the same origin as the previous one and features the official world tour logo. The two hoodies have certifications stickers and are illegal to reproduce. 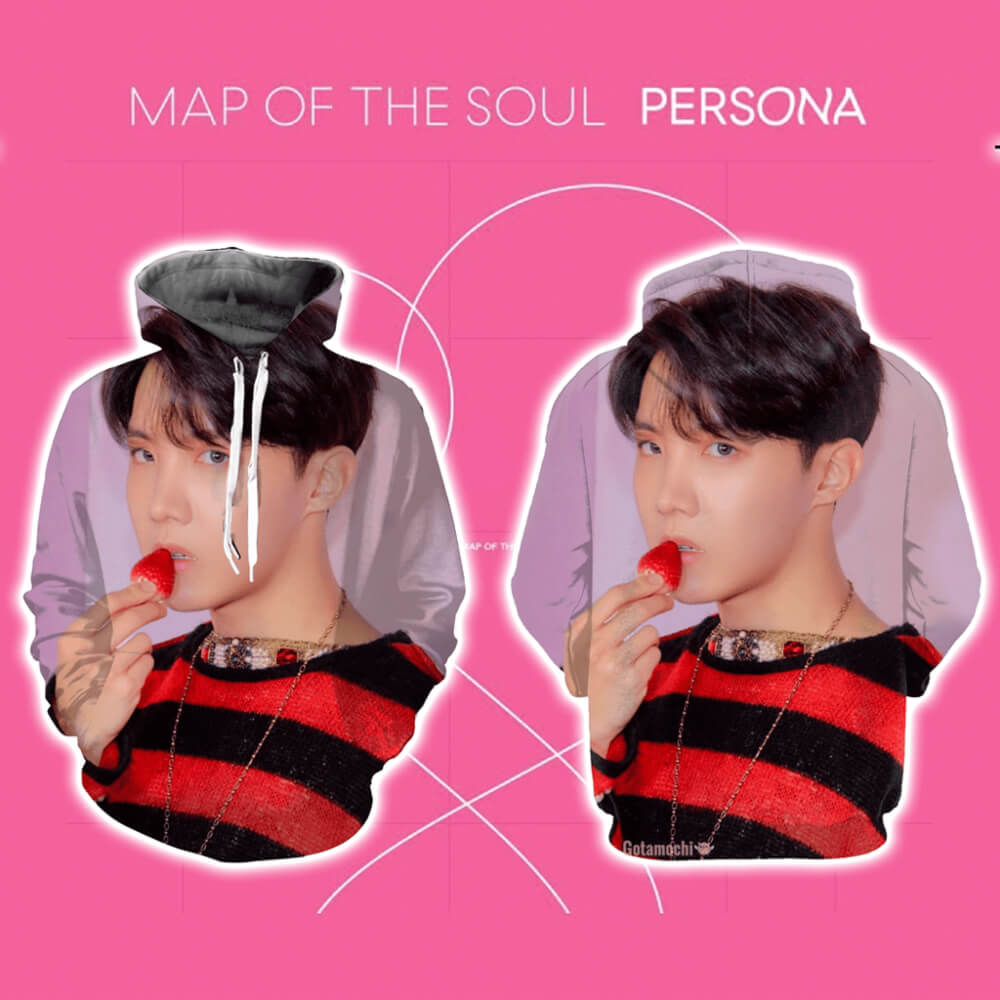 The members of BTS can be all across your body. Each of them. This hoodie is from the Map of the Soul: Persona collection. The manufacturer claims it is made with premium quality cotton, soft, comfortable and easy to care. The image is made with the stellar sublimation printing process, which resists fading and bleeds. Free express shipping worldwide from South Korea. 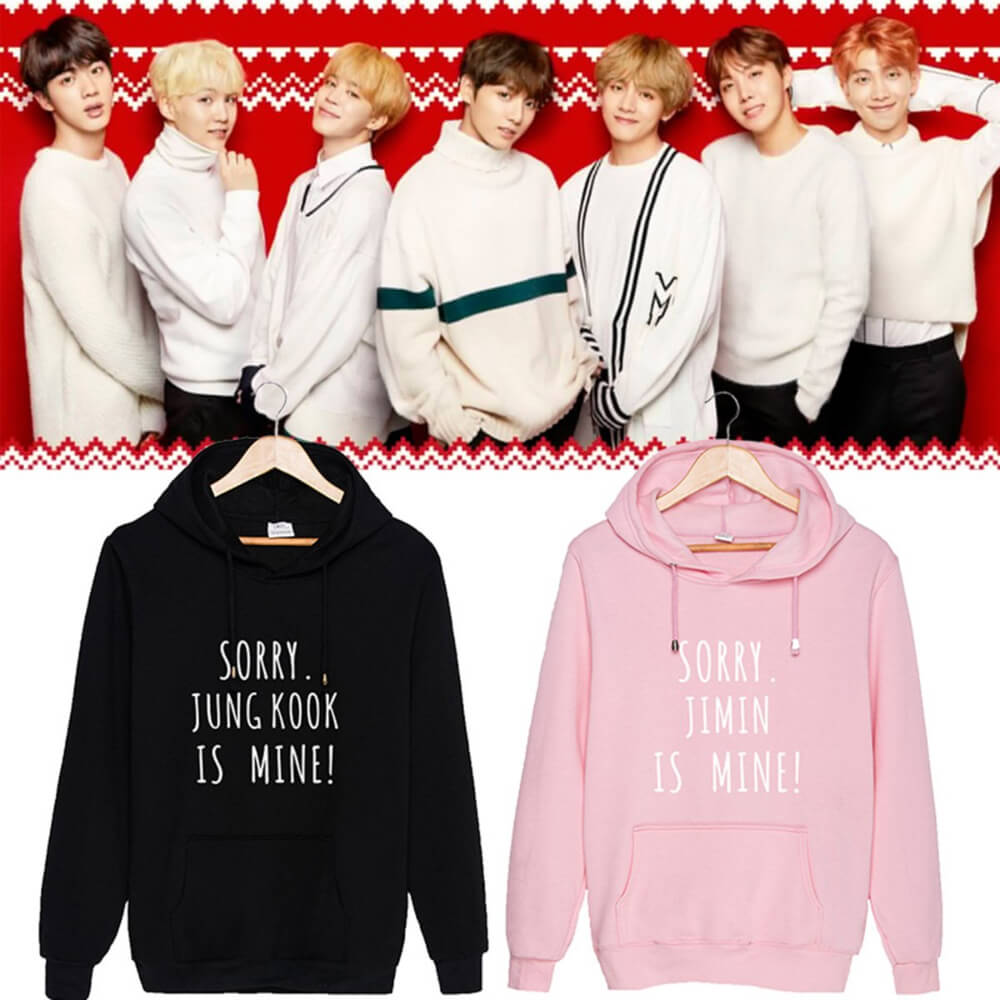 For hardcore fans of a particular BTS member. You can express your love to RM, Suga and others with a hoodie. Available in black, white and pink. 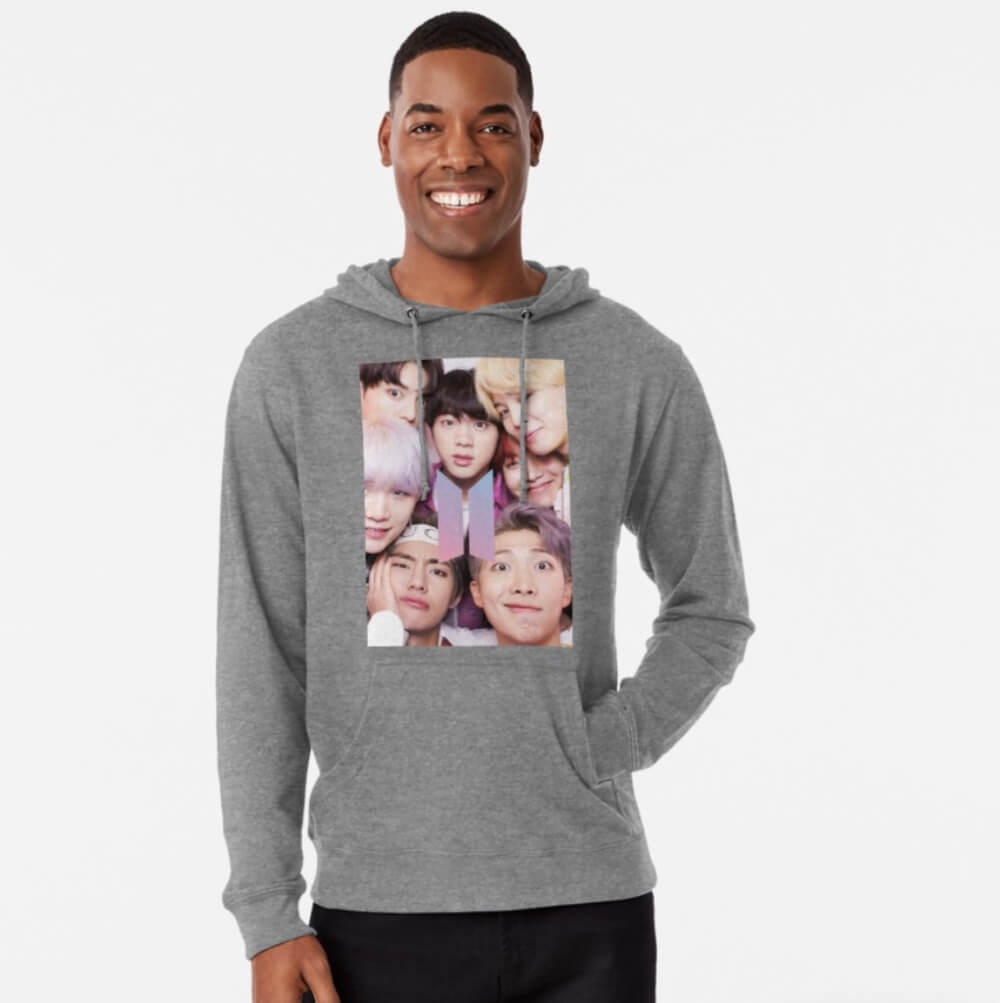 A lightweight hoodie made with preshrunk cotton and polyester, with spandex rib cuffs to maintain shape and kangaroo pocket. It has a cute group photo of BTS members and a logo printed on it. The photo is from the band’s appearance on the Late Late Show. 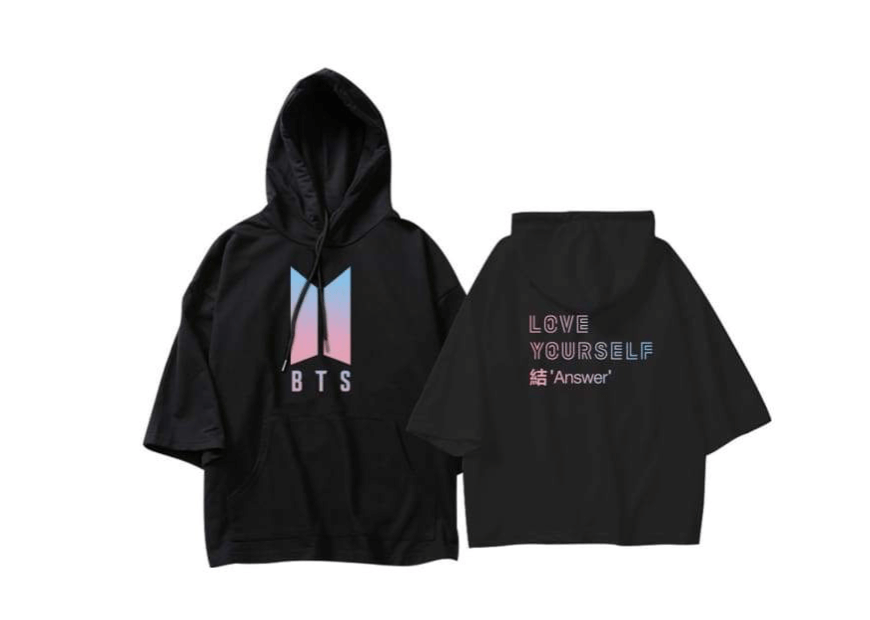 Spring hoodies are like t-shirts with a hood: made with light materials and have short sleeves. They are available in various colors and feature logo of one of the latest EPs. 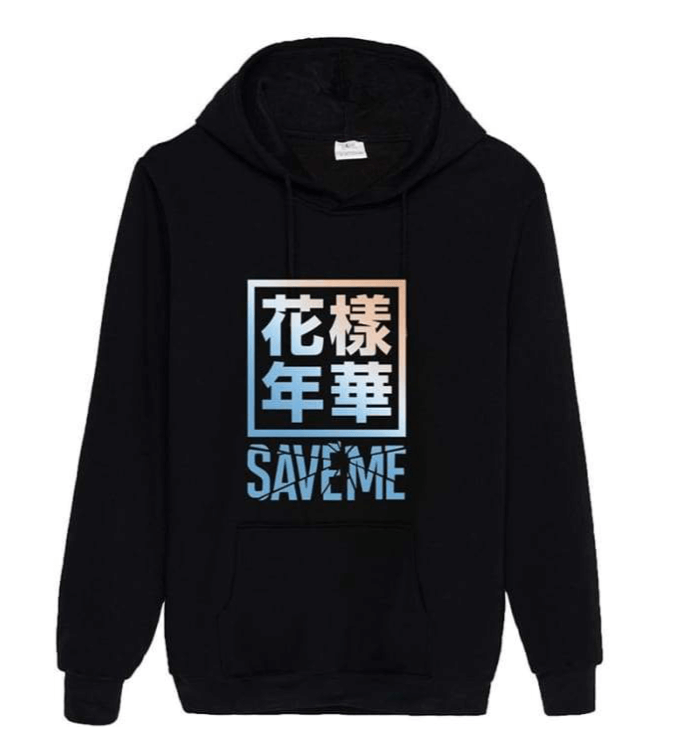 Save Me is a BTS old song, from their first compilation album The Most Beautiful Moment In Life: Young Forever. Although released in 2016, the song is still popular and loves, as well as the hoodie. The shop offers free worldwide shipping. 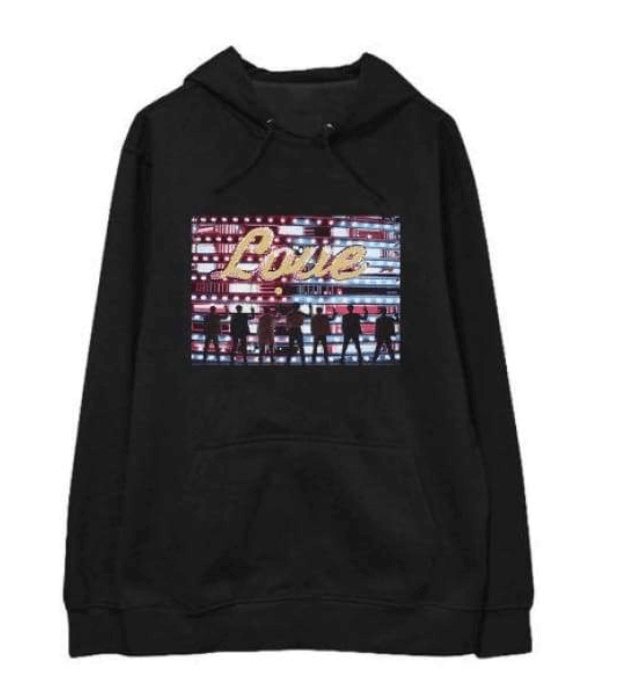 This hoodie features an image from the BTS music video Boy with Luv. It’s available in five colors. The print is made on the brand classic hoodie - full length with a front pocket. 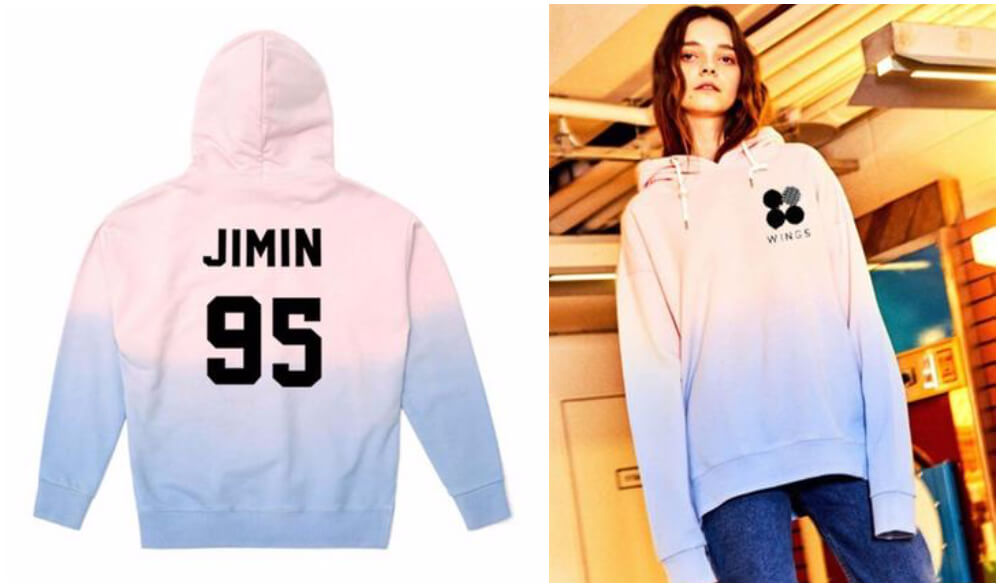 It is hard to catch old BTS merchandise around the internet now. However, this hoodie features not only cool gradient color and members’ names but also the Wings tour logo on the front. 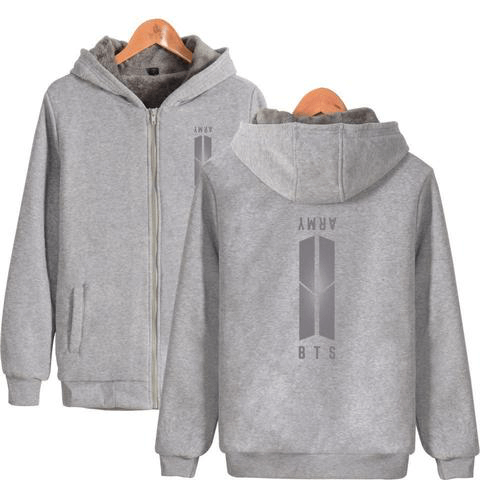 BTS logo and Army logo come together as one sign. This hoodie is great for winter and for those modest fans who want to show their support for the favorite band but do not want to wear bright hoodies with huge faces or logos. 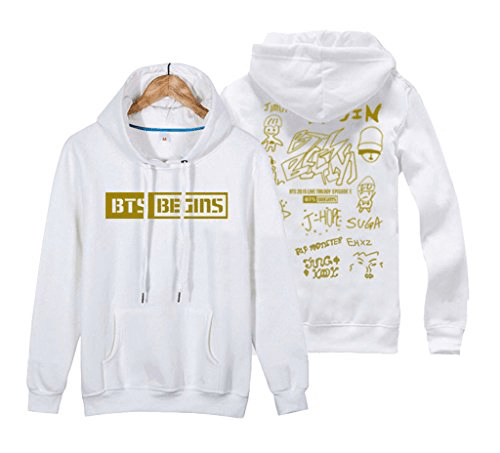 One of the oldest designs. BTS Begins is a concert headline from 2015. The concert took place in Seoul and the full name was 2015 BTS Live Trilogy Episode I: BTS Begins. The boys were also wearing this hoodie design. The material is rather thin, more like a t-shirt with a hood.

20. 4 Muster Happy Ever After Winter Jacket 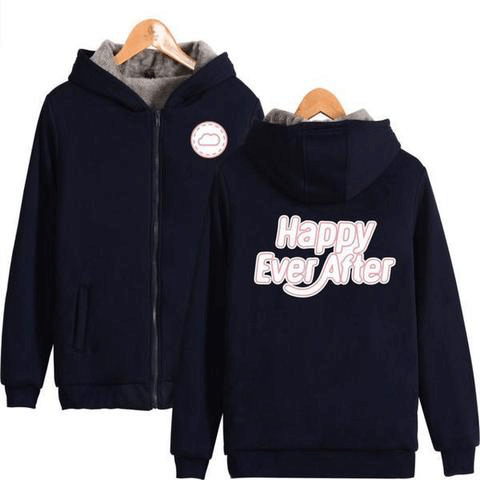 First of all, this one is warm. It features the name of the fan club event and a concert that took place in Seoul in January 2018. It was recorded on video and released on DVD and Blu-ray later the same year.

What to pay attention to when choosing a BTS hoodie

Material. It’s better to have a cotton hoodie than a synthetic one. Also, some of these clothes are suitable for spring and summer, others — for the cold season. Read the description and reviews not to be disappointed.

Name. If you have a favorite band member, double-check that you’ve chosen him.

Size. Most of the hoodies are made in Asia and for Europeans and Americans, it’s recommended to take one or even two sizes up from what they usually wear.

Delivery time. It usually takes one or two weeks in most of the shops. Read reviews for more accurate information.

Delivery area and payment method. Last but not least, some brands only ship to specific countries and accept specific payments.

Most of these hoodies you can buy on Amazon or Aliexpress, but there are also web shops that specialize in K-pop merch as well as the official BTS store.

K-pop was born in the 1990s as South Koreans view on Western music. It mixes elements of hip-hop, pop and R&B both in music, dance and style. It is known for eye-catching fashion and amazingly synchronized dance routines.

Bantang Boys are not just another K-pop boy band. They made a bet on social media and won. Not only are they good at writing songs, reading rap and dancing, but they are also disarmingly honest with their fans. That helps them gather stadiums for their concerts and to receive one award after another, beating huge names like Justin Bieber, One Direction and many more.