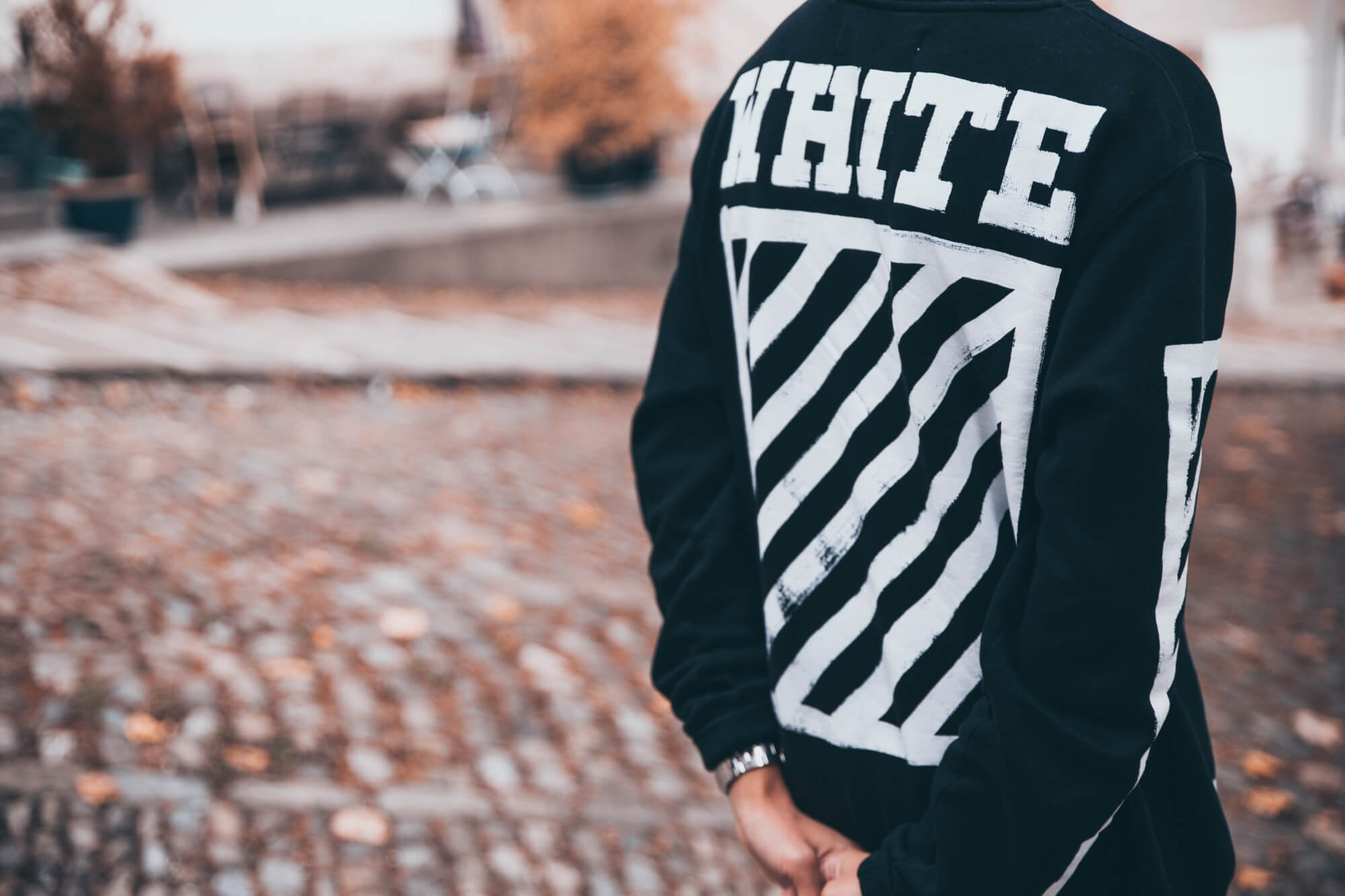 Off-White is one of the most hyped labels in today’s fashion. Its diagonal zebra-striped hoodies are difficult to overlook. The Milan-based brand sells extremely expensive streetwear and has a huge millennial fanbase. Off-White is followed by over 8 million people on Instagram. It is beloved by teenagers of Reddit and fashion elite alike. Pop stars and rappers wear these clothes in every magazine and on every social media feed. Nike x Off-White sneakers are sold on the secondary market at double the price and more.

The hottest fashion brand is a hybrid of high fashion and streetwear. It has a star-studded line-up of customers and is sold in high-end shops around the world. Let’s explore what has catapulted Off-White to the forefront of the minds of young, hip and fashion-focused consumers.

Off-White enjoys so much attention from celebrities partly because the brand’s founder is a celebrity himself. Virgil Abloh is a major icon in the streetwear world. He is also a DJ, architect and artist, a newly-appointed head of Louis Vuitton menswear, and a close friend of Kanye West. 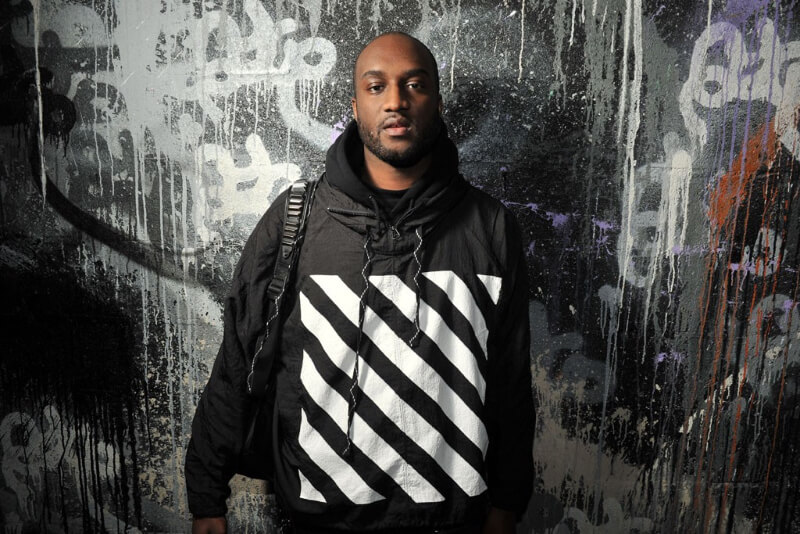 Abloh’s success story is almost legend by now. Born in 1980 in the family of two Ghanaian immigrants, Virgil studied civil engineering at the University of Wisconsin and received a master's degree in architecture at the Illinois Institute of Technology. In 2002, at only 22, he was hired by Kanye West as a creative consultant. None of the artists told the story of how they met. Nevertheless, Abhol worked with West for 14 years, creating and curating merchandise, album artwork, and set design.

It seems like Abhol not only is smart but has boundless energy. He was still studying in university when working for West. In 2009, the two interned together at fashion house Fendi headquarters in Rome. The same year they went to Paris Fashion Weeks and made their appearance in front of photographers. Back from Europe, Virgil and his friend Don Crawley launched RSVP Gallery in Chicago. This concept store is still functioning. It offers an exclusive selection of the hottest luxury goods, street designers' clothes, and vintage couture pieces. 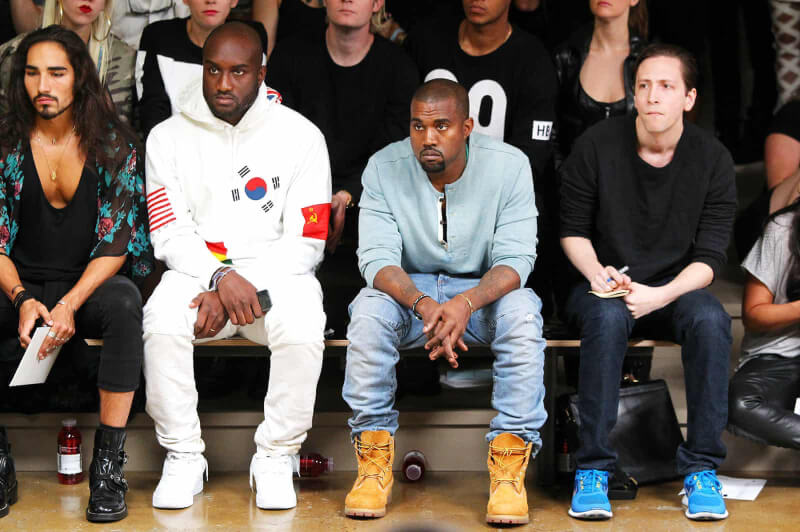 In 2012, Virgil Abloh started Pyrex Vision, the prequel of Off-White. He was fascinated by the idea of streetwear pieces featuring the logo of a couture house. So he bought deadstock Ralph Lauren flannel shirts for 40 dollars, printed them with Pyrex 23 logo and sold for a premium $550 price tag. The brand quickly gained popularity. It was sold in the most influential concept stores and stars like Kanye West and A$AP Rocky designed exclusive capsule collections for it. It was buzzy, hot and controversial. The pricing policy gained a lot of criticism and eventually lead to a shutdown.

Abhol scrapped the company, but it wasn’t long until he eventually came back with his new ambition and the history of Off-White began. The Milan-based brand was launched in September 2013 to bland ideas of streetwear, luxury, art, music, and travel. The aesthetic centers on diagonal lines, white arrows, and plain labels. It uses high-end fabrics, familiar streetwear shapes, and industrial packaging and shows it on fashion weeks runaways. 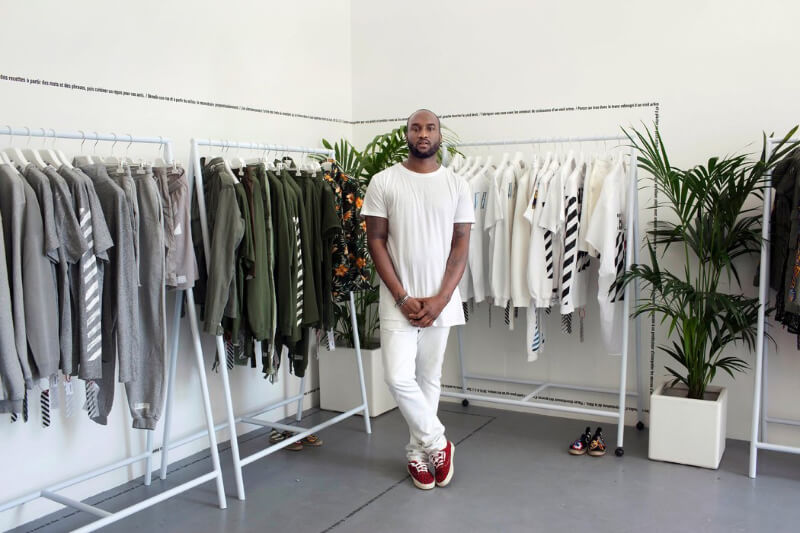 In just under ten years, Virgil Abhol has gone from Kanye West’s associate to founder and creative director of high streetwear label. Since the launch, Off-White was attracting a massive following. Its first womenswear line debuted at Paris Fashion Week in 2014 and was selected as a finalist for the coveted LVMH Prize. By December 2017 the label had won best Urban Luxe brand at London’s Fashion Awards, beating Supreme. Now Off-White can be bought in over 200 locations, including Selfridges, Barneys New York, and Net-a-Porter. It has its own shops around the world from New York to Seoul and from Toronto to Hong Kong.

On the website, the brand describes itself as“the gray area between black and white as the color Off-White.”  At the very beginning, Off-White offered streetwear clothes, papered with logos. But later it found the niche on the crossroads of edgy street aesthetic and luxury high fashion, with the price tag of the latest.

“In a large part streetwear is seen as cheap. What my goal has been to add an intellectual layer to it and make it credible,” says Abhol. He showed that he is able to take ordinary clothes, put a slight twist on them, and sell them for an extraordinary price. Moreover, he can do it with swagger. 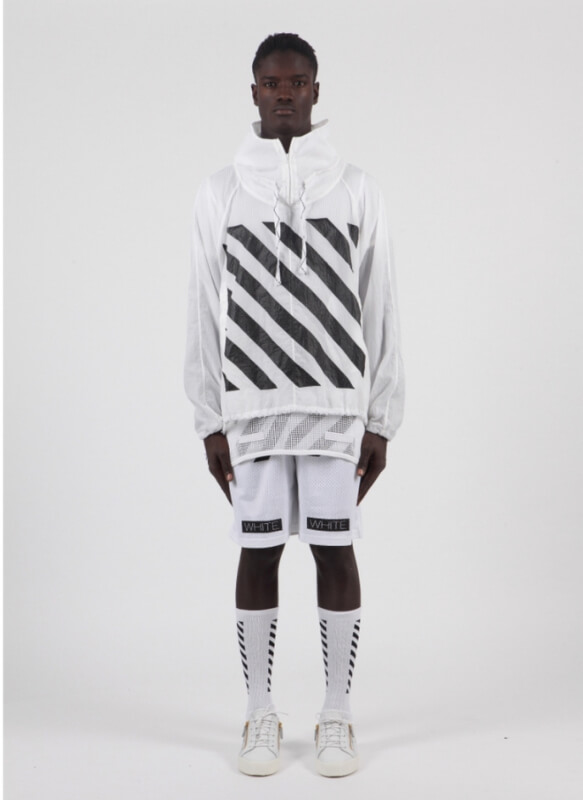 The Off-White logo is not exclusive to the brand. It is the graphic you can see on crosswalks and road signs. However, in the mind of the fashion-oriented public, diagonal stripes are now synonymous to the brand.

Instead of using a distinctive brand-identifying logo, as other designers do, Abloh chose completely unoriginal one and added the new meaning to it. It is now plastered on every Off-White garment and is one of the prime selling points. 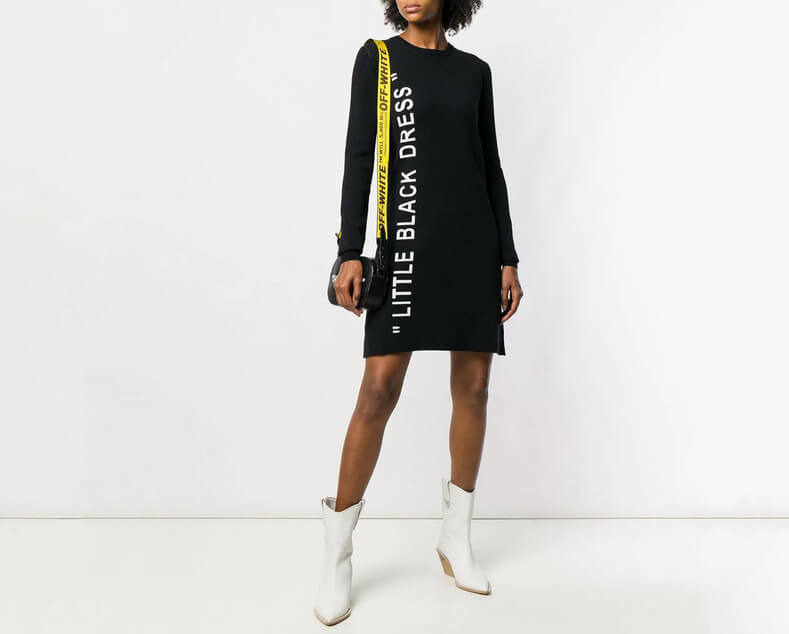 Putting everything in quotes is Abloh’s another signature. He inscribed “SHOELACES” on shoelaces of $700 sneakers, engraved “SCULPTURE” on a tote bag, and even labeled boots “FOR WALKING”. It seems like the designer wants to make everything indefinite, to leave the room for questioning the seriousness and originality. By presenting words as citations, he takes them out of context, adds irony. This concept very much goes in line with the ideology of the brand – giving people space to unleash their creativity.

Off-White is forever young. Not only Abhol is inspired by youth culture, but he is also a part of it, despite being almost 40. His brand stays fresh and relevant because he borrows from youth and sells it back to the world. He knows that youth do not want to be dictated what to wear. They demand autonomy on how to mix and match. Off-White pieces are easy to complement and combine with any other clothes.

For young hypebeasts, Off-White stripes and quotation marks are as coded and class-aware as Louis Vuitton monograms are to another generation. But Abloh not only defines what’s hip, but he also reaches the common ground between the two extremes. He is cultivating a sort of avant-garde apparel that merges streetwear culture with premium fashion.

The King of Influencers 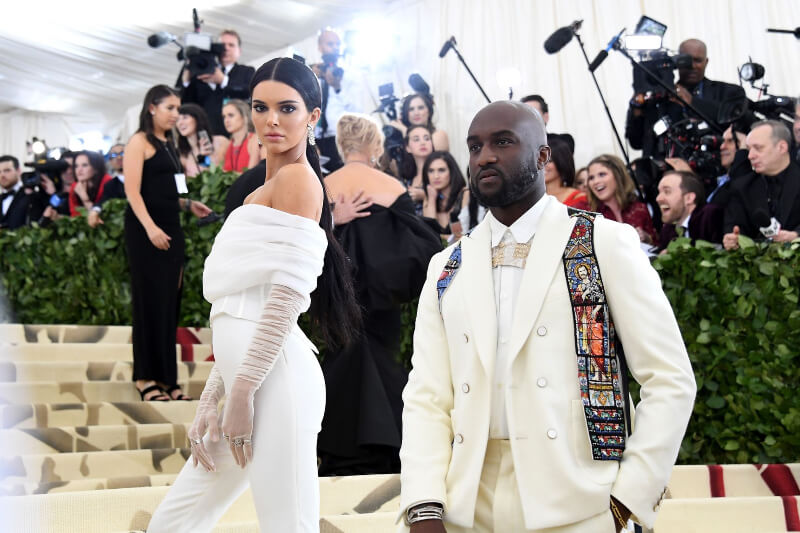 Abloh has mastered the influencer game. The power propelling the brand forward is the cadre of A-list influencers. Even though Off-White pieces are cool and top-quality, their price tag is derived from the hype. The brand is worn by the Hadid sisters, the Kardashians, and Jay-Z among many others. People watch them and believe its special.

Social media has undeniably played a role in the label’s soaring success, especially among millennials. In many ways, Off-White is an Instagram success story. The label has 8m followers. By comparison, Rick Owens has only 1m. Abloh steers social media professionally and easily, posting whatever inspires him: from road signs to unusual street style and fashion shots.

The Internet can’t agree on Abloh’s talent. Some think he is the greatest designers of our generation, others — that he’s just Kanye’s best friend. No one can decide if it’s brilliant or hollow, but we keep talking about it.

The Power of Collaborations

Last but not least, Off-White catapulted to the top of fashion’s hotlist with a series of collaborations. From Jimmy Choo to Nike, from Ikea to McDonald's, Abloh curated collections with high end and low-end brands alike. The collaborated projects more or less echo with the Off-White’s ethos – paying homage to a classic silhouette with a twist of the brand’s own aesthetic. 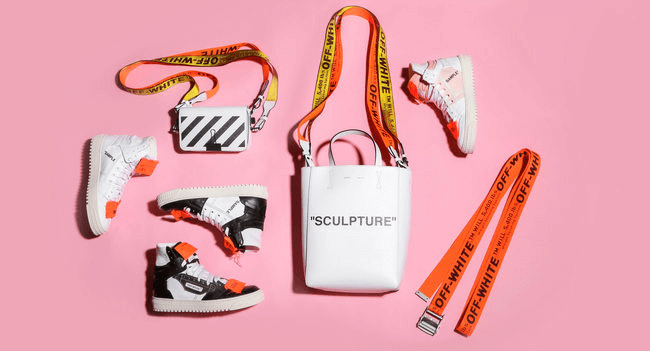 Virgin Abloh designed exclusive pieces to the most luxurious concept stores. He works with shoes, belts, bags, and hoodies of course. Moreover, he has an interior design collection in collaboration with Ikea. A blue rug with “Keep Off” written on it is definitely a piece for Millenials.

Off-White releases its collections in drops and you can find all of them on the official website. However, most of the older pieces and limited capsules are sold out and now available only on the secondary market.

Let’s take a look at some of the most noticeable pieces Off-White had over these years. This list isn’t full and it can’t be. The brand is extremely fruitful. 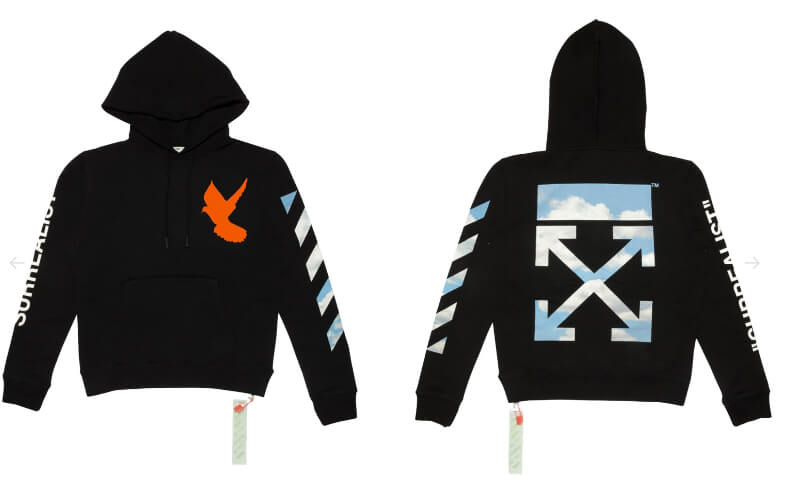 The Off-White hoodie is classic. Diagonal stripes crossed arrows and quotes - all the staples are present in this piece. Sky imagery appears inside the “X” logo at the back, an orange bird emblazoned at the chest. The brand’s hallmark hanging tags are added as dangling accents at the bottom hem. The capsule is online exclusive. 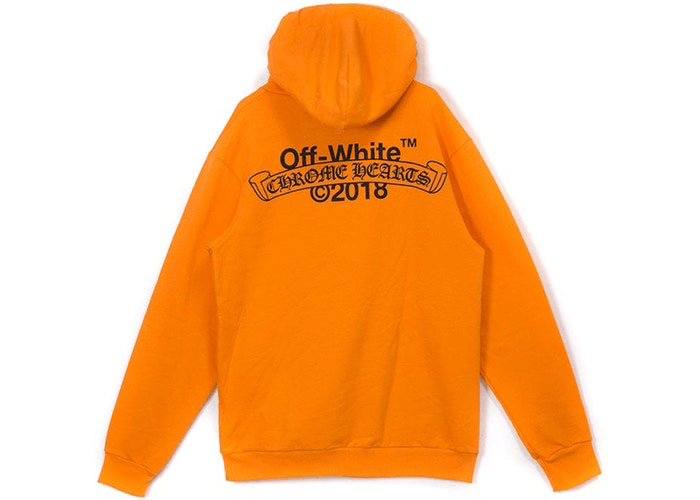 The collaboration of early 2018 with luxury label Chrome Hearts consisted of a single hoodie. Surprisingly, it did not have recognizable Off-White elements. The graphics reappear on the front, relegated to the chest area and minimized. Noticeably, this hoodie was sold recently on StockX for $2,000 USD. 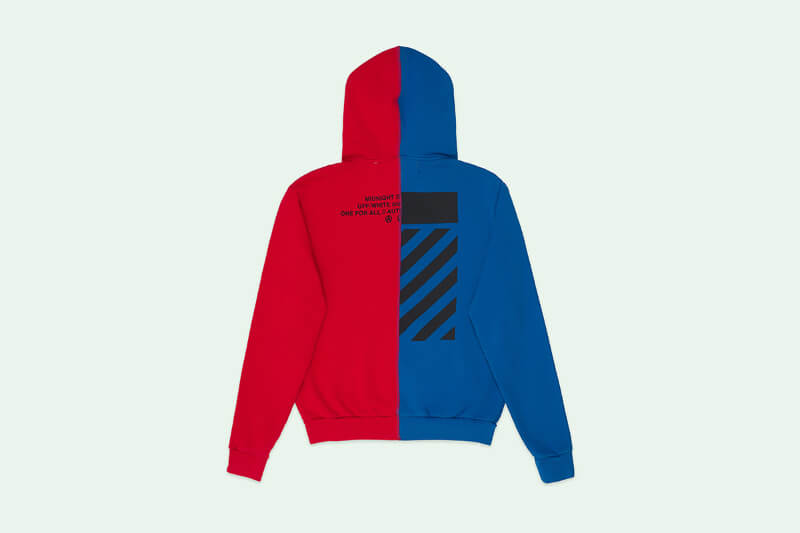 One of the earliest collaborations with Midnight studios was a big hit back in 2016. It looks like two hoodies are sewn together. Now available on the secondary market only. 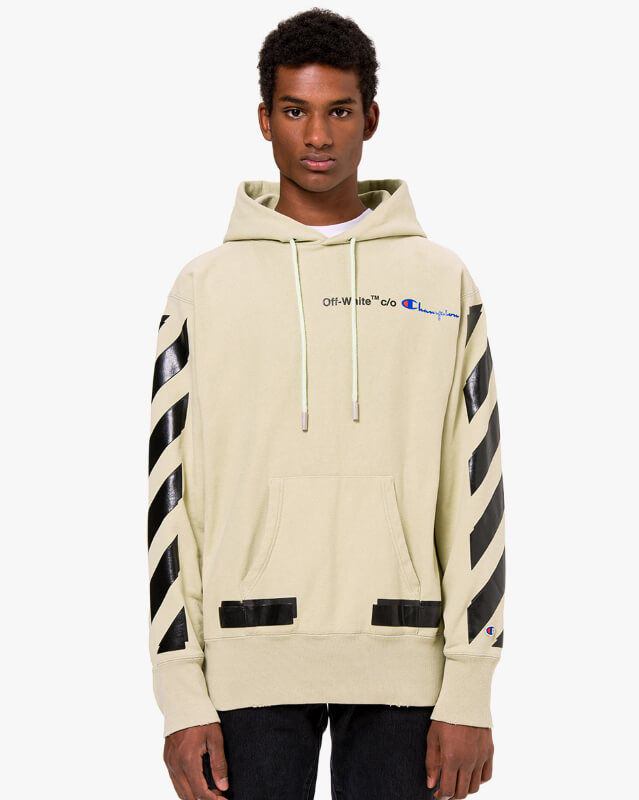 Released in 2017, Off-White x Champion capsule featured no less than sixteen pieces, including hoodies, sweatshirts, t-shirts, and tracksuits. Off-White’s signature duct tape-style stripes adorned each one of them, as well as the Champion logo. Though from an old collection, this hoodie still costs over $500 USD. 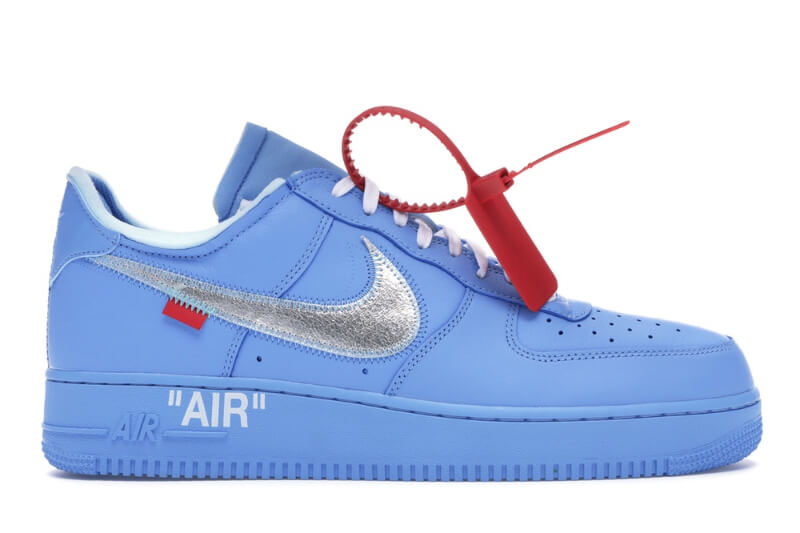 Virgil Abloh redesigned ten different models of Nike sneakers for their The Ten collaboration and each one of them was a blast. These all blue “MCA Chicago” Air Force sneakers are among the most valuable Nikes on the resale market, with the average sale at almost $2,000. The design was released to commemorate the Abloh's “Figures of Speech” exhibition at Chicago’s Museum of Contemporary Art. The first pair was exclusively gifted to Serena Williams.

“For All” Off-White Hoodie 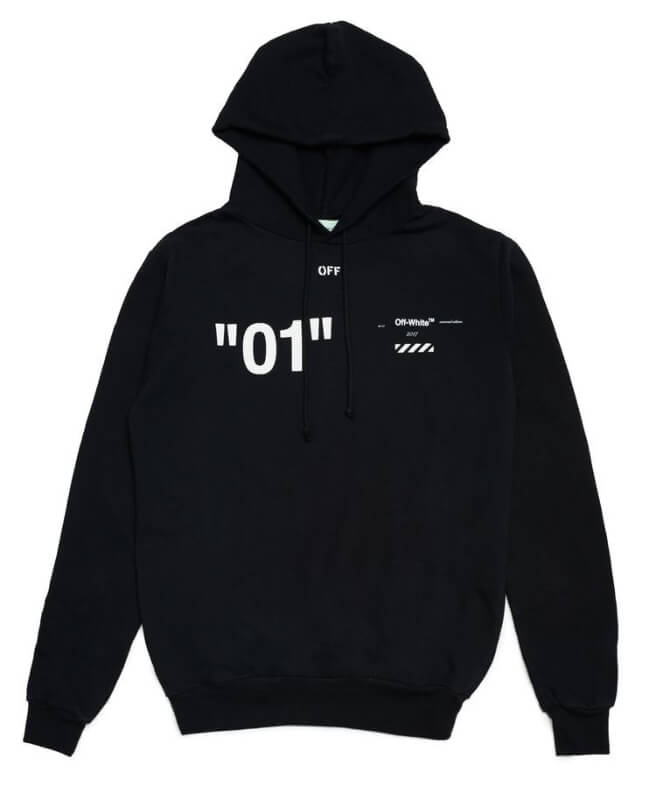 “For All” is a capsule collection for those not willing to sell $500 for a hoodie. It is marketed as budget-friendly with T-shirts priced at $95 and hoodies at $170. This is for sure more accessible than Off-White's standard collection. Most pieces are unisex. The hoodies are basic, but still recognizable. 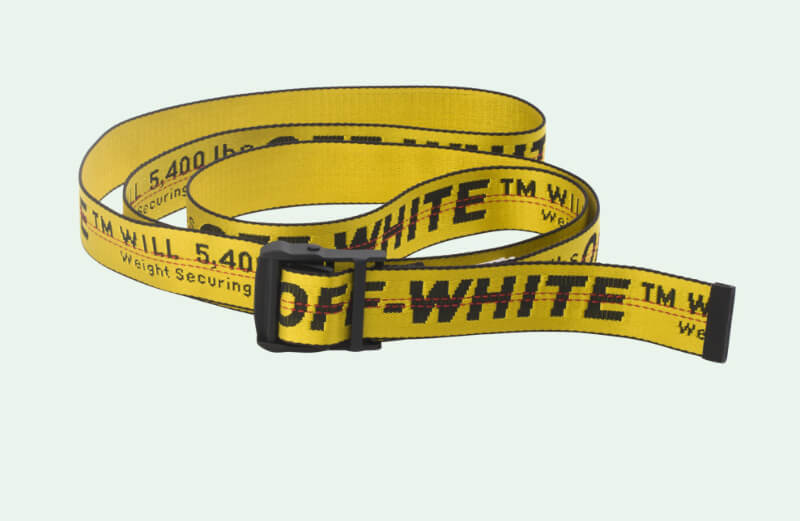 Yellow industrial belt in the brand’s signature. It is 2 meters long, utterly edgy and iconic as well. Its extended length has once been so confusing that Off-White had to make a video guide on how to wear it. Now the brand has such a belt almost in each collection.

From June 9 to September 22, 2019, Museum of Contemporary Art in Chicago hosts an exhibition entitled “Figures of Speech”. It is dedicated entirely to Virgil Abloh career and features all his creative projects, from fashion to music, to architecture. The display explores pivotal moments of Abloh’s eclectic practice with signature collections pieces, video highlights of his shows, graphic works, and music samples.

Recently Abloh was asked to design costumes for a ballet. As for the future plans, the designers says he wants to collaborate with Apple on the next iPhone. We might see it with diagonal stripes soon.

Abloh sits at the intersection of art, commerce, and popular culture. He benefits high fashion’s desperation to regain youth appeal. With his help, streetwear storm the luxury sector. Moreover, he is capitalizing on the largest modern trends, such as the return of logos and hip-hop dominance in popular music, more robustly and quickly than anyone else.