The story behind Champion clothing brand 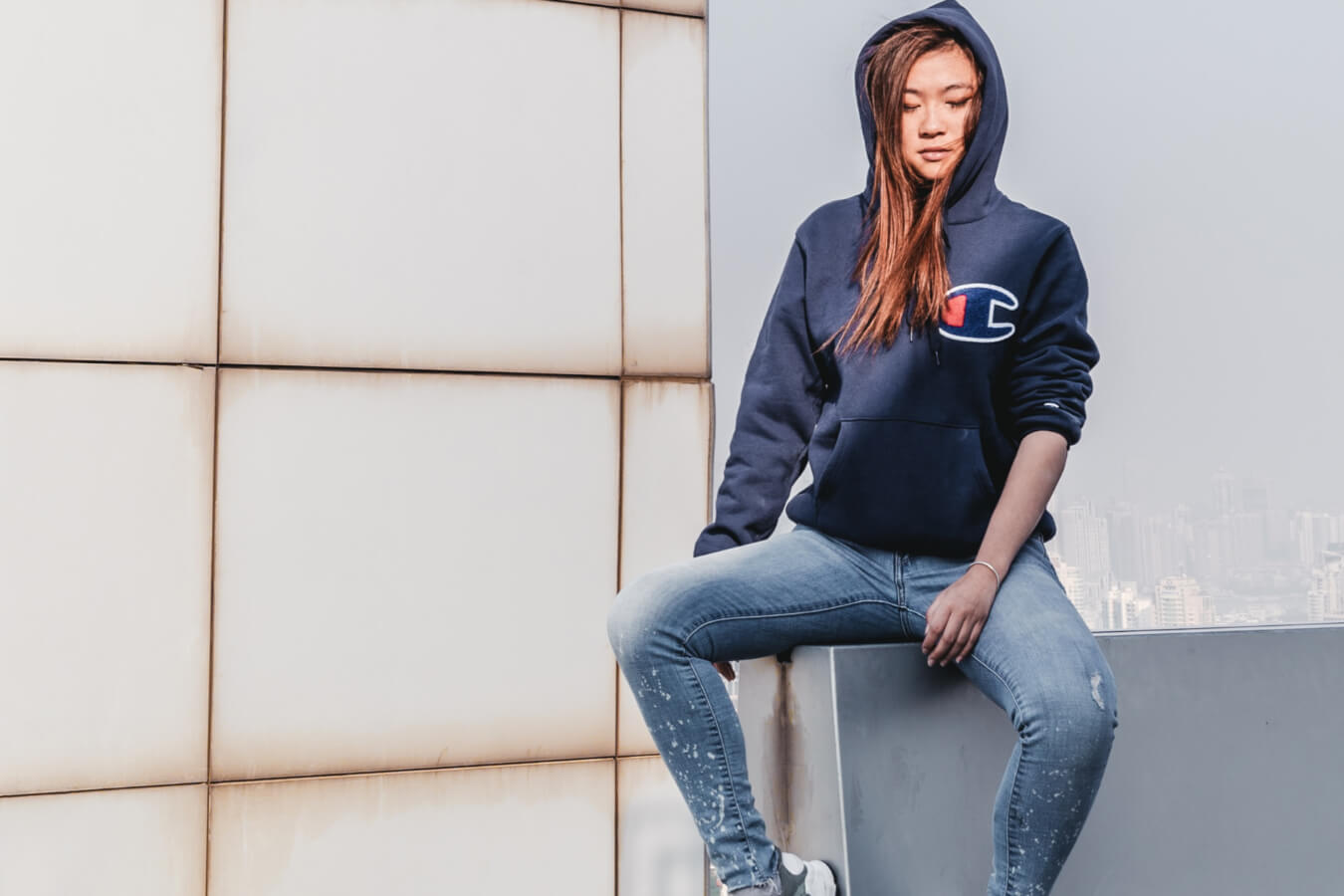 In 2019, Champion celebrated 100 years. The brand credited for the origin of sweatshirts, sport bras and hoodies is now seeing a fabulous revival. It is chosen not only by athletes, but also by artists, creatives and celebrities around the world. The signature “C” logo has become a timeless classic. And the brand’s history is no less spectacular as its clothes. 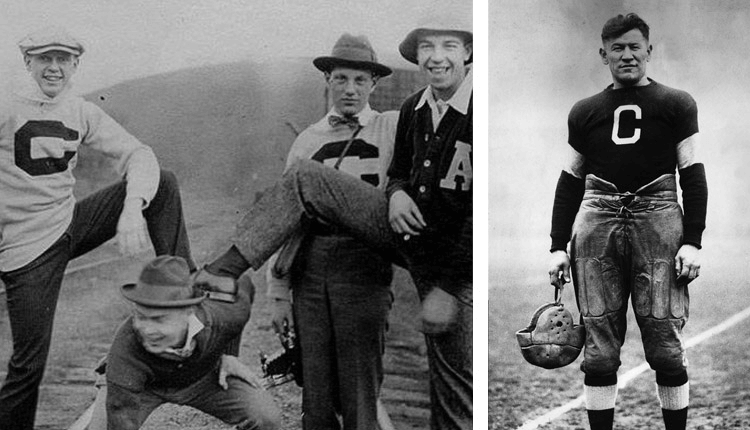 In 1919, in Rochester NY, Simon Feinbloom and sons Bill and Abe started the company that would become the major outfitter of US sports teams. The Knickerbocker Knitting Company initially produced protective wool underwear and heavily-knit sweaters for outdoor workers.

The postwar 20s saw a boom in sports and athletic competitions around the world. Athletes were active and passionate but their gear was often improvised and poorly made. University of Michigan noticed the durability and functionality of Knickerbocker’s apparel and invited the company to make sweatshirts for it’s numerous sports teams. This was the brothers’ first major success.

In the 1930s, the company was renamed as Champion Knitting Mills. By this time, it produced not only sweatshirts and sweatpants, but also t-shirts and athletic socks. In 1934, the brand partnered with Moe Sports Shop and start selling clothing with the Michigan University insignia. It was the birth of collegiate apparel as we know it.

Champion worked directly with school and college teams, receiving valuable insights from athletes and coaches. College sweatshirts became bestsellers. Students and alumni bought them to show their school spirit. Champion’s fame spread across America and new clients came, one after another. Soon, the brand was adopted by the US Military Academy. Future soldiers wore sweatshirts during training exercises and physical education classes. 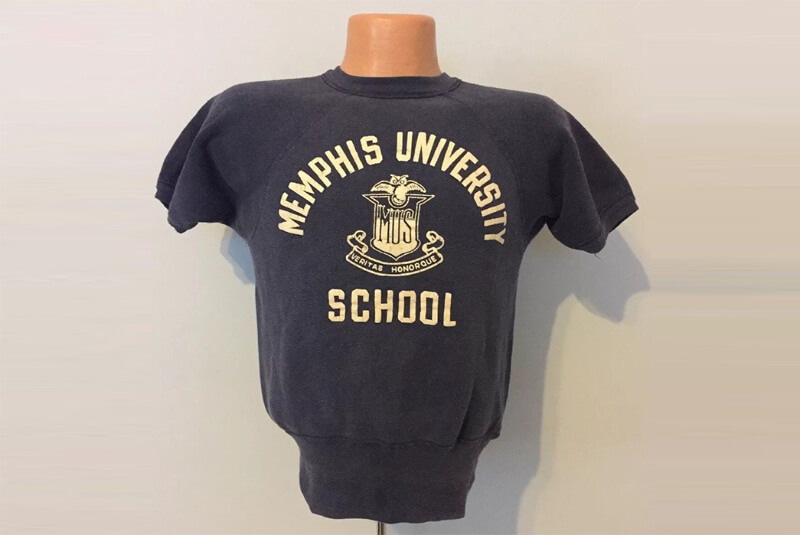 The reputation for durability, functionality and pioneering technologies allowed Champion to popularize its own insignia. The “C” logo became a symbol of quality and comfortable apparel. It appeared for the first time on the left sleeve of a sweatshirt.

Champion set up to alleviate the shrinkage that came with frequent washing of sports apparel. In 1938, they solved the problem with now-famous reverse-weave technology. The world’s first engineered athletic sweatshirts were made of a heavy-duty cotton fleece and were cut in the transverse direction. Moreover, cuffs, necks and hems were made with the same technology to protect them from damage and to allow freedom of movement. The company started patenting this process the same year, but it was finalized nearly 15 years later, in 1952.

The 1930s also saw the creation of the hoodie. However, at that time, Champion called them “side-line sweatshirts” and marketed to outdoor workers or players to wear in-between game time. Its popularity was yet to come.

In the 40s, Champion supplied athletic apparel and T-shirts to US troops. After World War II, the Army adopted these clothes to train its recruits. The sweatshirts spread to a large scale outside university campuses and training grounds. By the 50s, they had become an important wardrobe staple.

At this time, Champion introduced new physical education uniform to address low fitness levels among children. The gym suits were of such a good quality to become the first certified by the American Institute of Laundering. In 1968, the company launched a special PE collection for women: Lady Champion.

By this time, celebrity athletes were wearing Champion apparel. Muhammad Ali was spotted wearing a white hoodie before his historical fight at London Wembley Stadium in 1963. 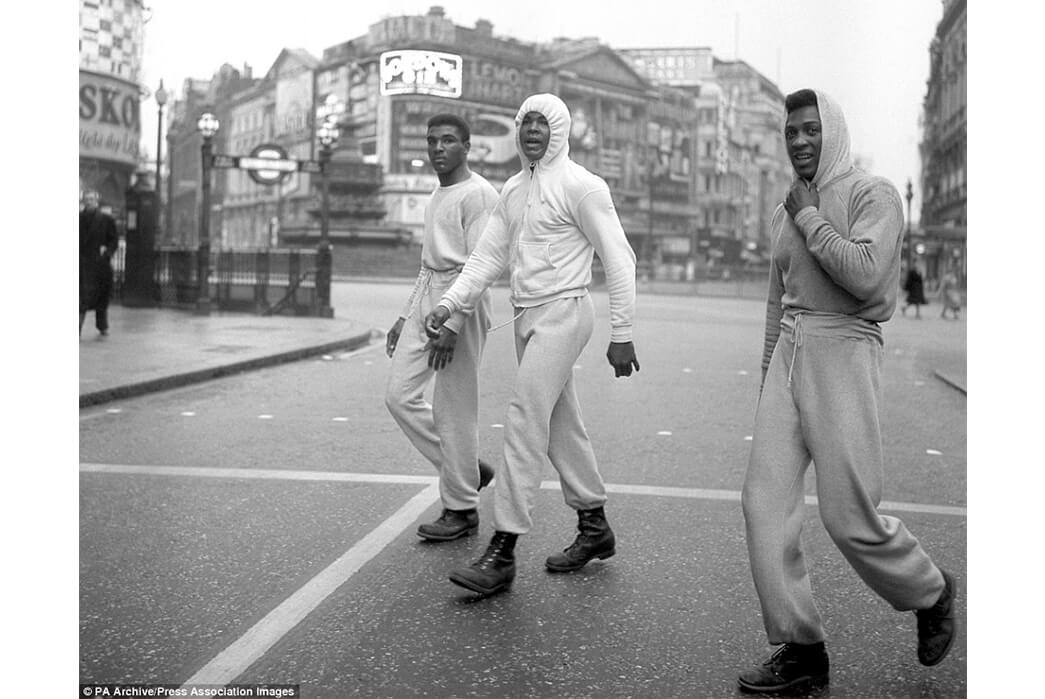 In 1967, the company went public and changed the name to Champion Products. The same year, it introduced the first nylon mesh jersey for football players. It was aimed to combat the effects of heat exhaustion and to enhance performance. The innovation was quickly adjusted for basketball teams and soon become an industry standard.

The 70s were probably the most innovative years in athletic apparel. Champion transformed the industry with breathable mesh shorts and reversible t-shirts, sports bras and nylon-lined jackets. Players of the National Football League were now wearing Champion’s uniforms. 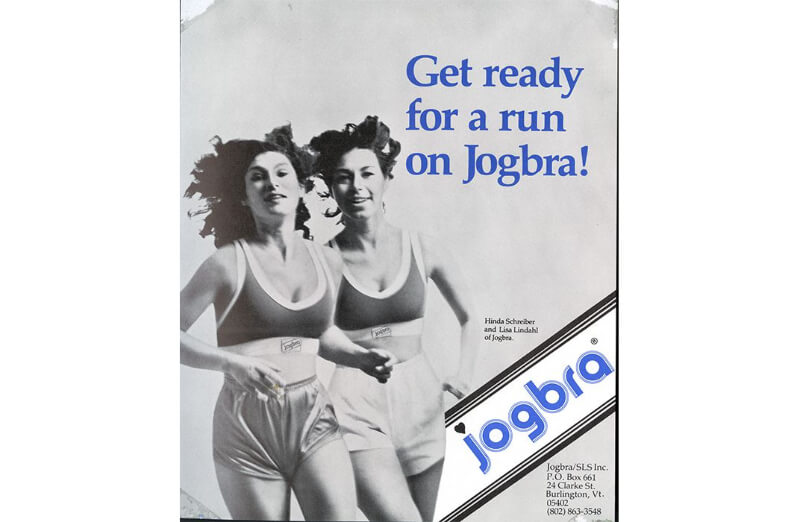 Although a hoodie was introduced back in the 1930s, it was finally acknowledged by the public in the 70s. The item was adopted by the newest superstars – rappers - and moved from sports fields to the streets and stages. Hoodies with red and blue logos became the uniforms of the hip-hop community.

In the mid 70s, the company expanded its business to Japan and Europe and by the beginning of the 80s, it debuted at department stores. It supplied clothes to over 2,000 colleges, almost 20,000 schools and seven NFL teams. But the success and profits made Champion Products a target of a takeover bid. In 1987, it was eventually sold to a huge conglomerate, Sara Lee, for a reported $320 million. 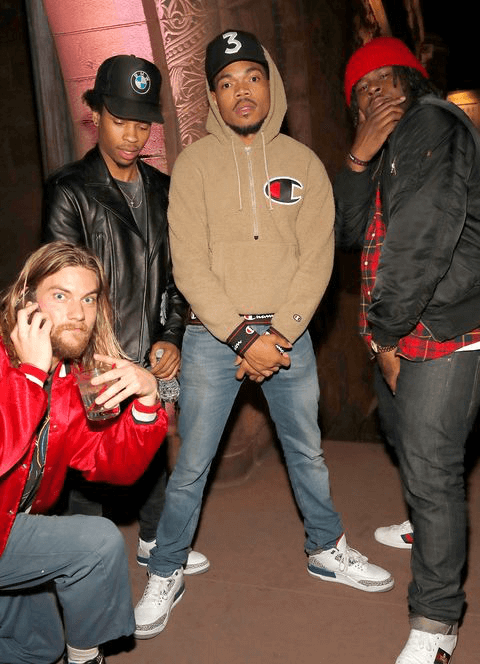 In the 1990s, Champion scored another victory. The company got the exclusive right to outfit 27 NBA teams. This partnership made Champion the only supplier for authentic on-court and off-court merchandise for the National Basketball Association.

In 1992, Champion made uniforms for the legendary US Olympic men's basketball "Dream Team." Their gold medal was the springboard for the brand’s international reputation. The pieces from the 90s are still desired by NBA enthusiasts and collectors. 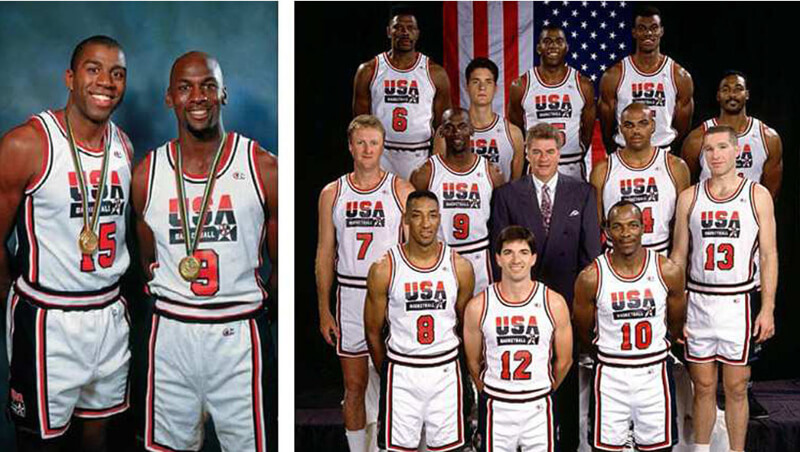 The popularity of Champion apparel in the 90s is hard to overstate. It was a sports uniform for college students but also a casual outfit for skaters and hip-hoppers. It was simultaniously adopted by the hardcore punk scene, street culture and jam band fans. Anyone who had the slightest interest in sports or popular culture had a Champion sweatshirt or hoodie, or both.

Popular fashion always changes and this is what happened to Champion at the beginning of the century. The fame slowly faded away, and the market fragmented between new brands into thousands of niches. But, fashion tends to return. In 2015, Champion reissued the original collection with the iconic “C” logo and 90s nostalgia made it popular. The brand started popping up in celebrities’ Instagrams and trendsetting magazines. For less than three years, the number of Champion’s Instagram followers climbed from 200.000 to over 5 million.

One key element of the brand’s skyrocketed popularity was a number of collaborations with streetwear legends and troublemakers like Supreme, BAPE, Vetements and others. It underlined Champion’s versatility, grabbed attention and also exposed it to the new segment of customers: luxury shoppers. 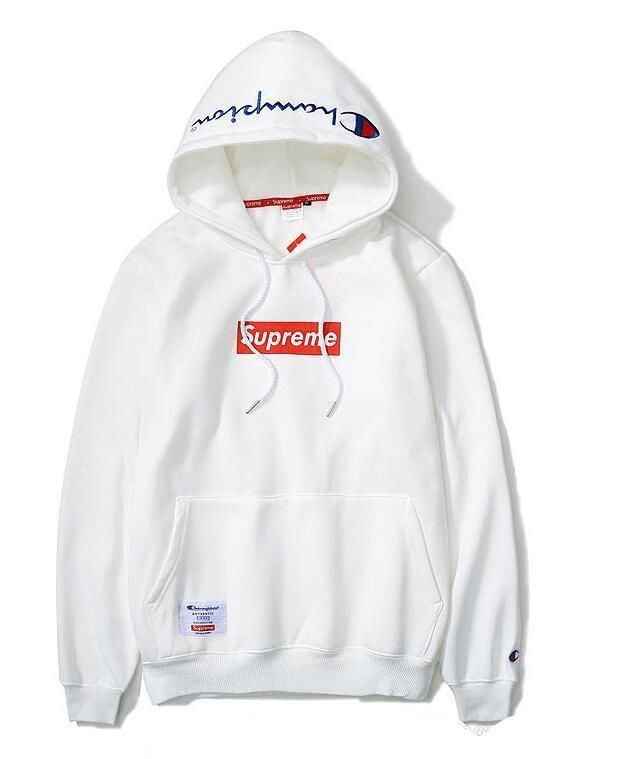 In 2017, the Champion hoodie officially became an icon. It was displayed at New York's Museum of Modern Art (MoMA) as a part of exhibition of fashion items that have had a strong impact on modern society. A red hoodie was first designed in the 80s, but the brand still uses the classic silhouettes with a few tweaks to keep things up to date.

After going nearly a century without opening a single shop in America, Champion had a debut in Los Angeles in 2018. It was followed with store openings in New York, Boston, Chicago and Philadelphia. The brick-and-mortar establishments underline the new fashionable status of Champion, but also offer immediate customization with patches and logos. 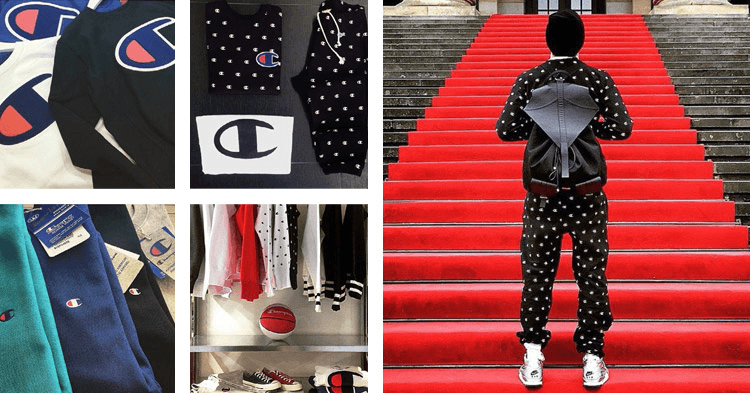 Champion happened to be on the intersection of three big fashion trends: logo apparel, 90s nostalgia and adoption of sportswear into casual style. The company managed to embrace all the newest trends without losing its originality and centenary heritage. It not only remains relevant, but continues to make history with the combination of classic and innovation.