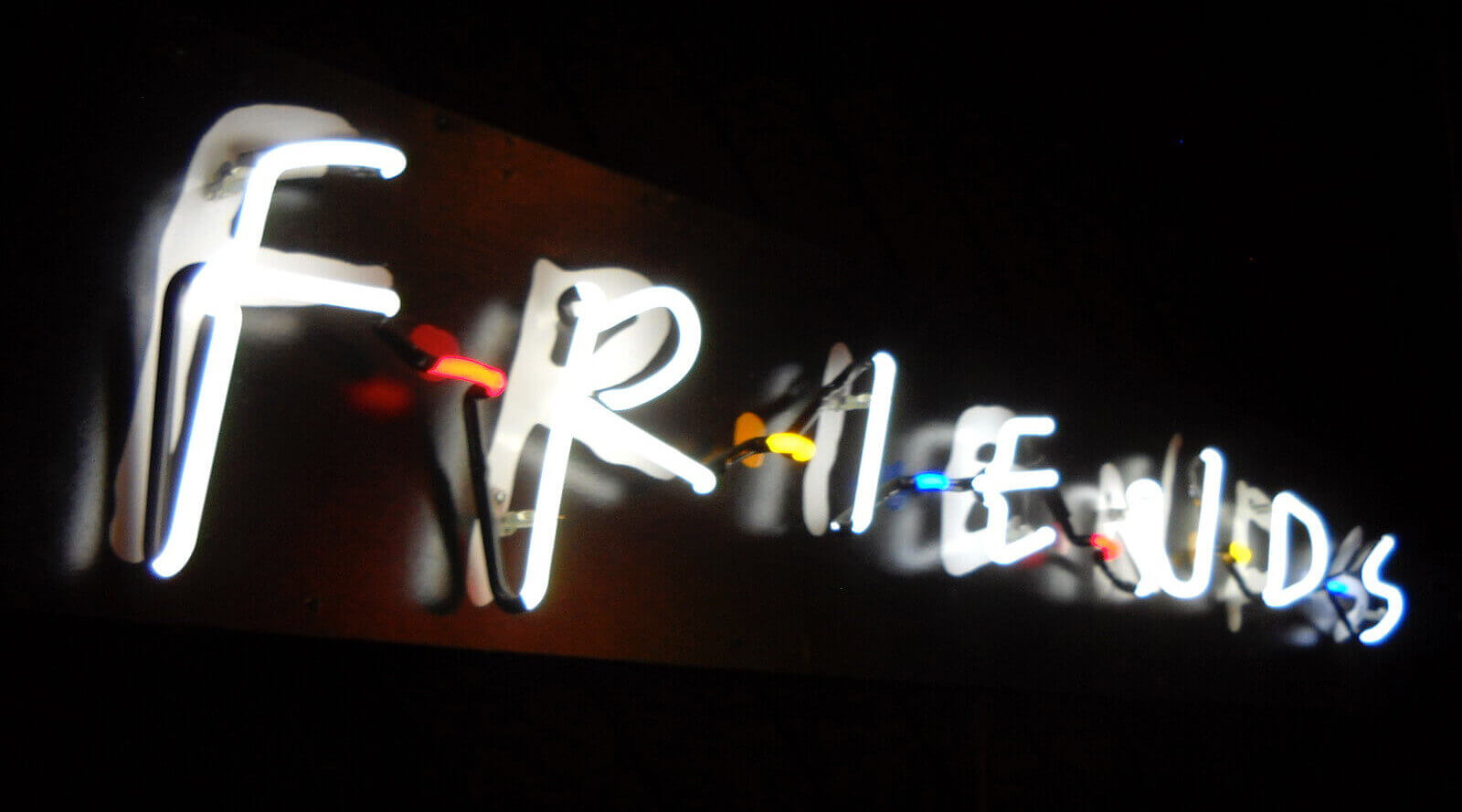 On September 22, 1994, Friends made its debut on NBS. It’s been 25 years since then and we still binge-watch all ten seasons on Netflix. The show ended in 2004, but its popularity never ceased. On the contrary, Friends have a growing fan base from boomers to gen Z teens. And all of them are craving for merch.

The show, created by David Crane and Marta Kauffman, changed the face of sitcoms forever. First titled Insomnia Cafe, it revolved around the lives of six New Yorkers who share their ups and downs. Monica and Chandler, Rachel and Ross, and Joey and Phoebe were our friends as well. They’ve inspired us to pursue our dreams and influenced our life choices for over two decades. Their romantic adventures and career issues are both funny and relatable for millions of people. 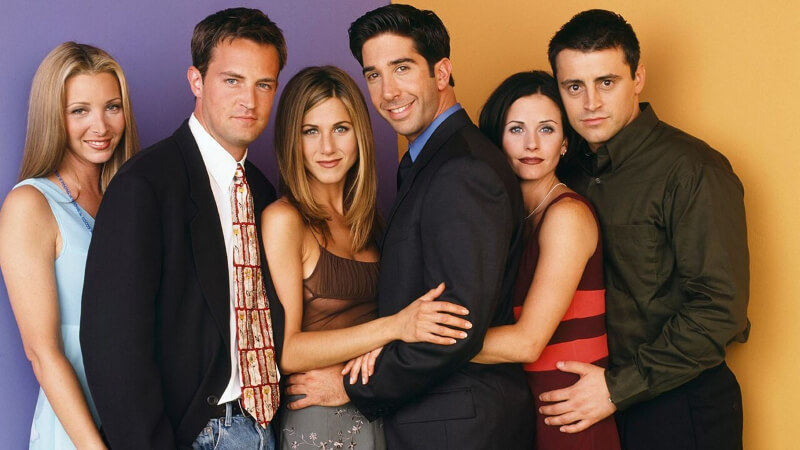 Before the show, the main cast was mostly unknown, but now they’re some of the highest-paid actors in television history. The funny thing is, they actually became friends during the show! They used to huddle before the start of every episode (which were, by the way, almost completely filmed in front of live audiences). They negotiated their salaries together so that they were equal for everyone. It went pretty well since each of the six was earning $1 million per episode for the final season.

The final episode of the tenth season aired on May 6, 2004. With over 52 million TV viewers, it was the most-watched episode of the 2000s. Of course, fans want a reboot, but it’s unlikely to happen despite all the rumors. The reunion did happen over a dinner at Cox’s house in autumn 2019, but it wasn’t for the show. Jennifer Aniston posted her first Instagram photo from there and gained five million followers in the first 12 hours. 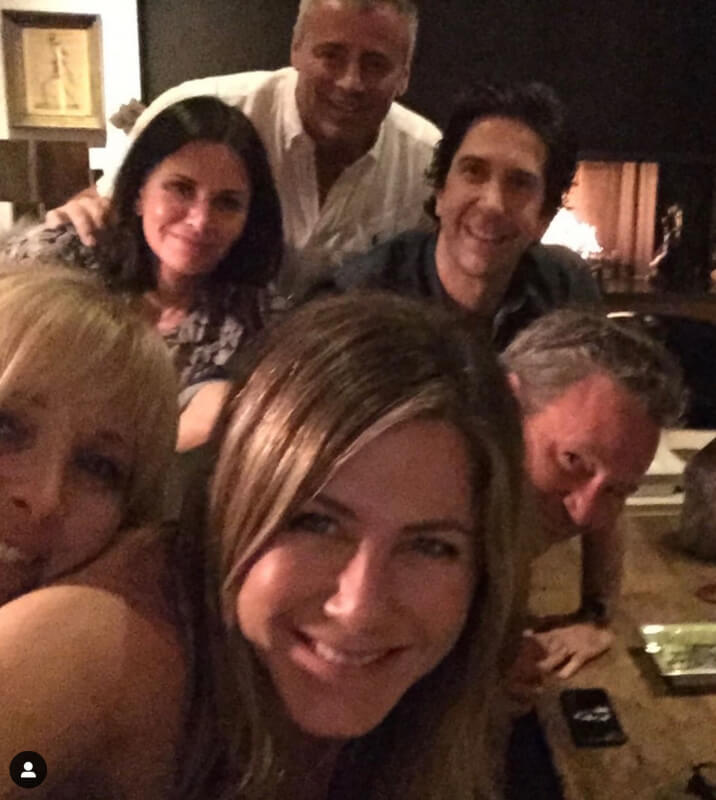 Since its very beginning, Friends earned its buzz in an old-fashioned way. Thanks to laugh-out-loud jokes and cliffhanger storylines, it quickly became fuel for dinnertime discussions and hours-long phone talks before the rise of the Internet. Millions returned to their TVs week after week, and here’s why.

1) Friends is funny. It’s as simple as that. Their punchlines, habit of getting in trouble, and comedic situations still make us laugh during each episode. Modern teenagers have some sort of nostalgia for this humor, just like they have for the NASA logo.

2) People of any generation can relate. Friends may seem a bit outdated in 2020, but the characters are so easy to feel close to. We sympathize with Rachel in her search for financial independence and enjoy following her on-again, off-again relationship with the rational-yet-romantic paleontologist Ross. We love Monica for being the “mother hen” of the group and Phoebe for being so odd, but so sweet. We smirk at Chandler’s sarcasm and Joey’s “How you doin’?”

3) Less drama. Sometimes we don’t want action and suspense, just casual life. Friends is a comedy that makes you feel warm and cozy because you can literally feel the love that each person in the show has for the others.

4) Sense of family. The concept of “chosen family” was quite new at that time. Friends developed the idea of an alternative family lifestyle. Maybe the “American dream” is not a house with a husband, a wife, and a couple of children, but hanging out with friends in a tiny cafe. Anyway, their connection with each other was so sincere, we can still feel it through the decades. 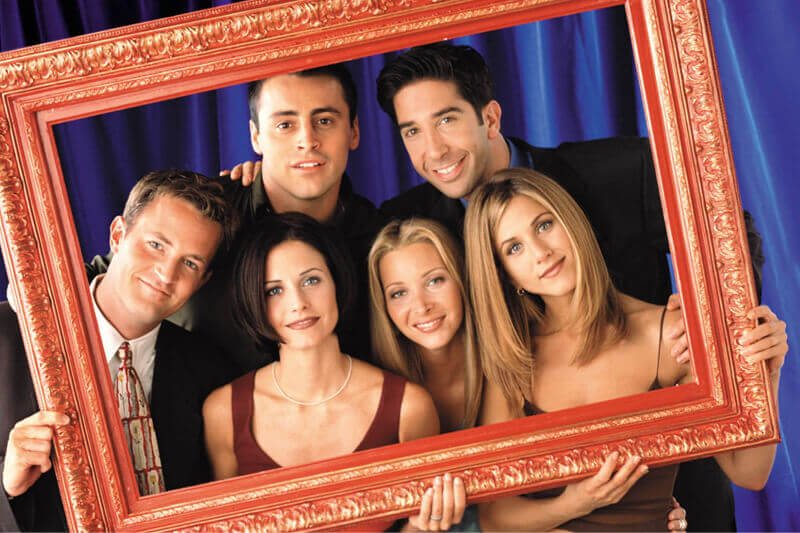 The characters of Friends were influencers before social media and mastered the art of product placement before it became a thing. We wanted a haircut like Rachel and put a frame on our door (after painting it purple). Even today we still say, “How you doin’?’” or, “Pivot” or, “Oh. My. God.” The series has inspired countless Central Perk coffee shops and warehouses full of clothes, not even mentioning games and homeware.

Friends reached new generations of fans after Netflix bought the streaming rights in 2015. It has been the most-watched show on the platform for several years in many countries. Now, thanks to the spending power of millennials and their nostalgia for the 90s, Friends merch has flooded mass-market shops like H&M, Primark, and Zara. We have t-shirts, hoodies, and even pajamas that picture the most memorable moments of the show.

We scoured the Internet to find the best and funniest hoodies with your favorite characters. These will make a perfect gift for diehard fans or anyone who needs a reminder about true friendship.

Top 15: Choose Your Friends Hoodie to Try On 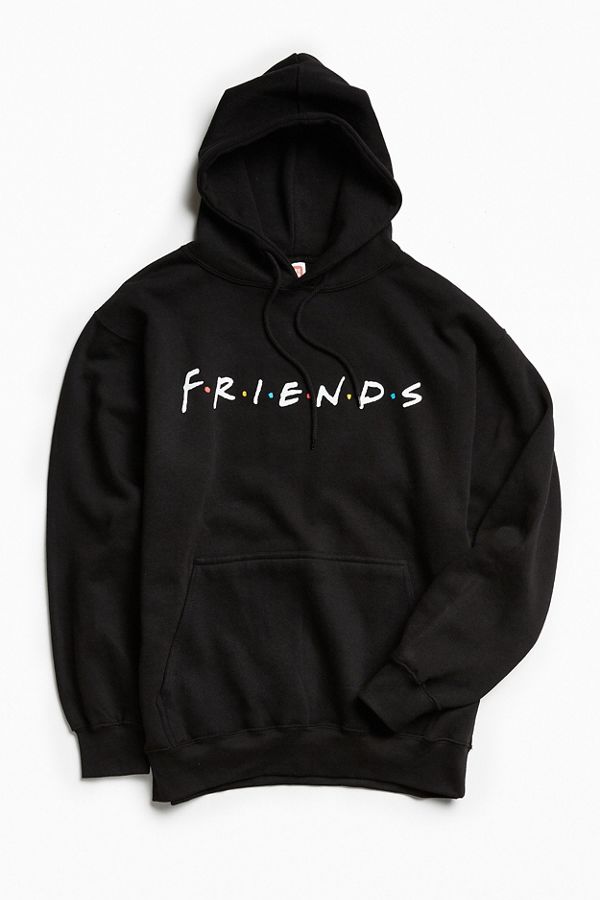 You can’t go wrong with the classic. A comfortable hoodie with the official Friends logo across the chest is the best choice for those who like to be warm and cozy. A pullover with a hood is perfect for chilly days or relaxing at your favorite cafe with friends. The design is toned-down and simple, yet cute and close to your heart. The material is cotton and polyester fleece. It also features rib-knit cuffs and hem, adjustable hood, and front pocket. 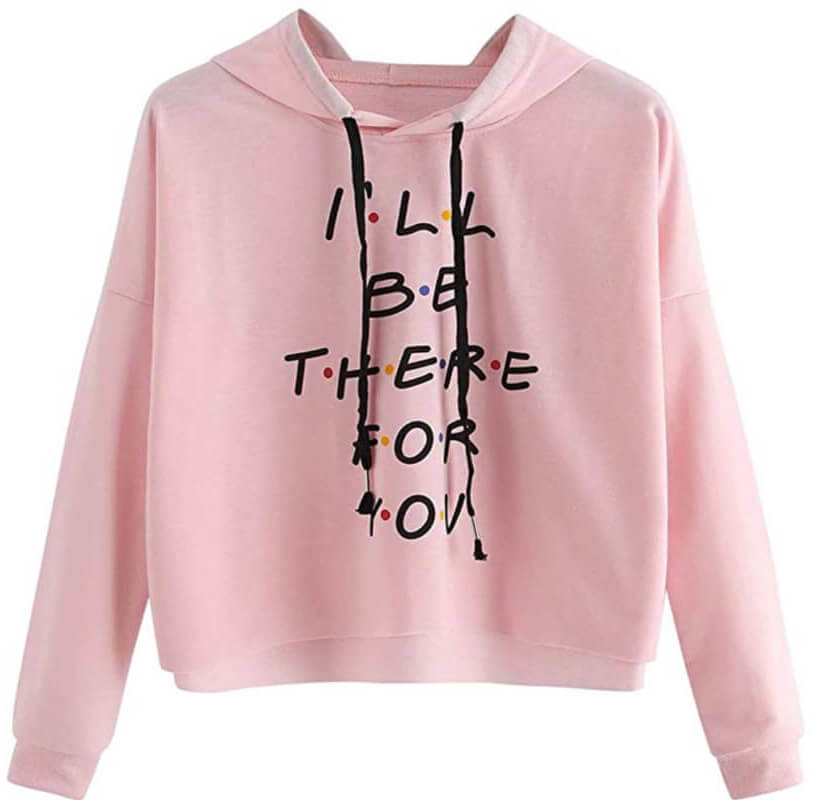 If you love the track by The Rembrandts, this hoodie is a must-have. It says “I’ll be there for you” in the distinctive Friends font, to remind you how valuable your friends are. It has a slightly cropped and loose silhouette that provides you with a balance between coziness and freedom of movement. The cuffs and hem are ribbed for durability. The soft cotton blend material is machine washable and soft. The seller has seven color options in case you do not want it pink. 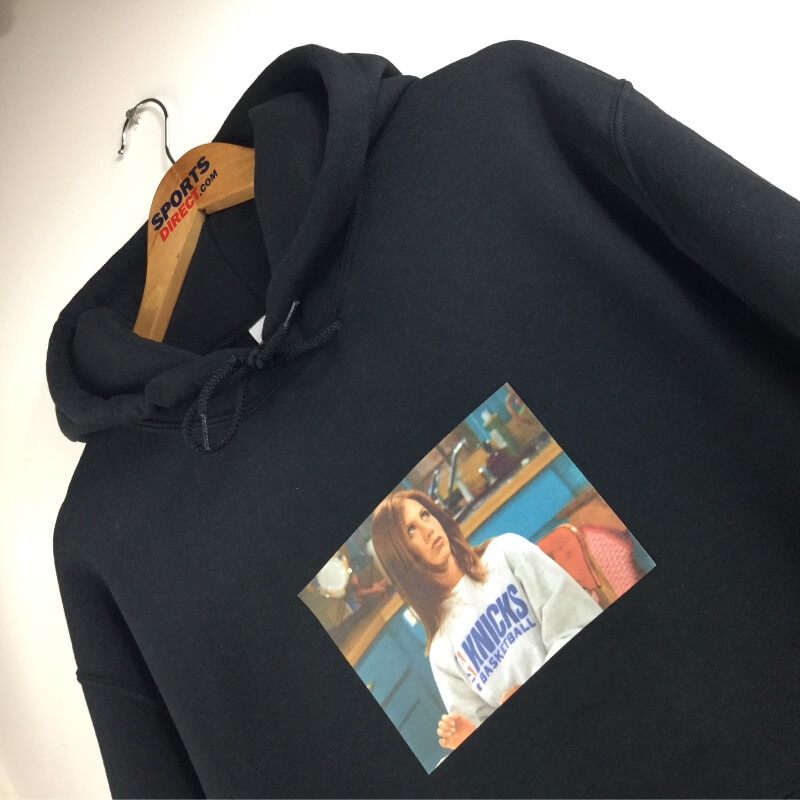 Rachel is the style icon among the Friends. Her outfits were adored and copied. Even now, if you’re going for a true 90s vibe in your style, you can source inspiration from Rachel’s looks. This hoodie features a frame from the episode “The One Where No One’s Ready” with Rachel wearing a sweater with an NBA team’s logo.

The hoodie is available in unisex sizes from S to XL. It is also possible to make it in other colors. The seller advice to wash it in cold water only. 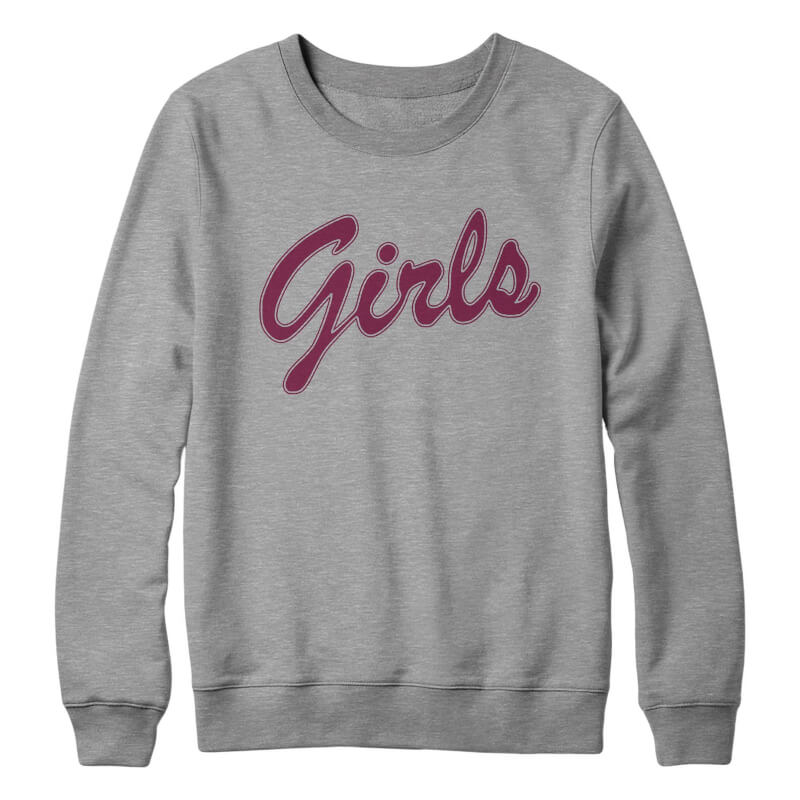 Did we mention that the six friends have been trendsetters for over two decades? Here’s just one example: Monica wears a crewneck like this in one of the episodes — and it’s now one of the most coveted items on Etsy. It has the softness, simplicity, and comfort we all want from a casual top, as well as the retro vibe and secret meaning only Friends fans can get. You can also find a t-shirt or hoodie with this design. 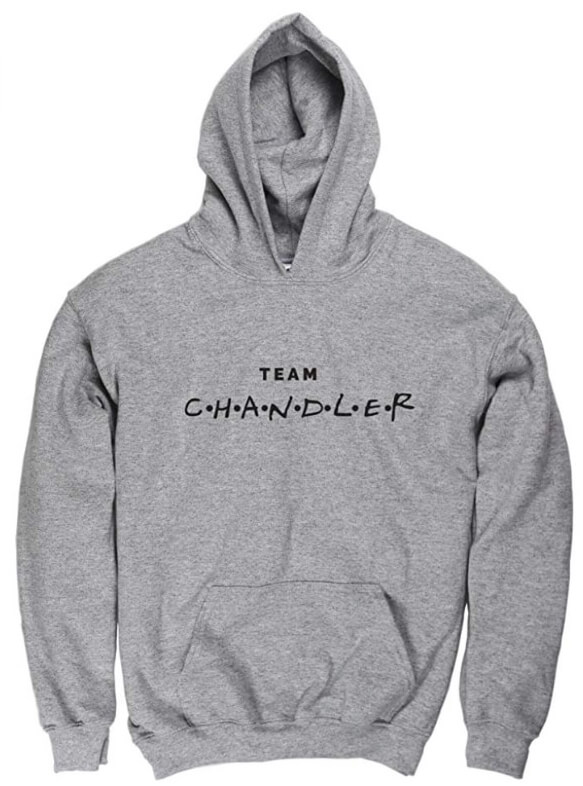 Not only can you get Chandler, but also Rachel, Monica, Joey, Ross, and Phoebe. You can be in a team with any of them with this custom unisex hoodie. It’s made of a soft 50/50 cotton/polyester mix available in eight colors, including bright orange and pink. For the print, the seller uses high-quality clothing vinyl that doesn’t crack or fade even after numerous machine washes. This design is also available for children’s t-shirts and baby vests. 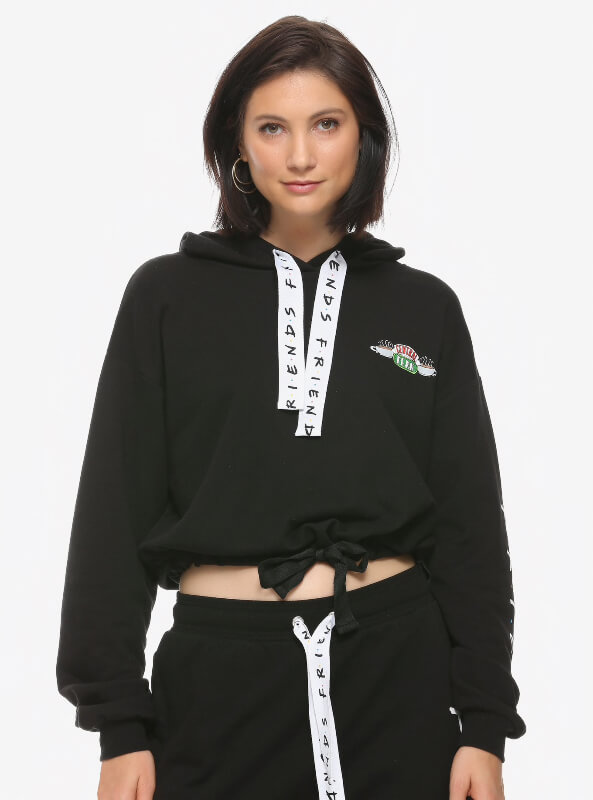 A lightweight pullover hoodie with a unique design that still holds the spirit of one of the greatest sitcoms of all time. This hoodie is way more stylish than most Amazon listings, so don’t hesitate to take it out for a party or gathering with friends in your favorite cafe. It’s also comfortable enough to binge-watch another season on a couch. The main features include cinched drawstring waist, wide logo ribbon on a hood, left sleeve graphic, and Central Perk chest hit. 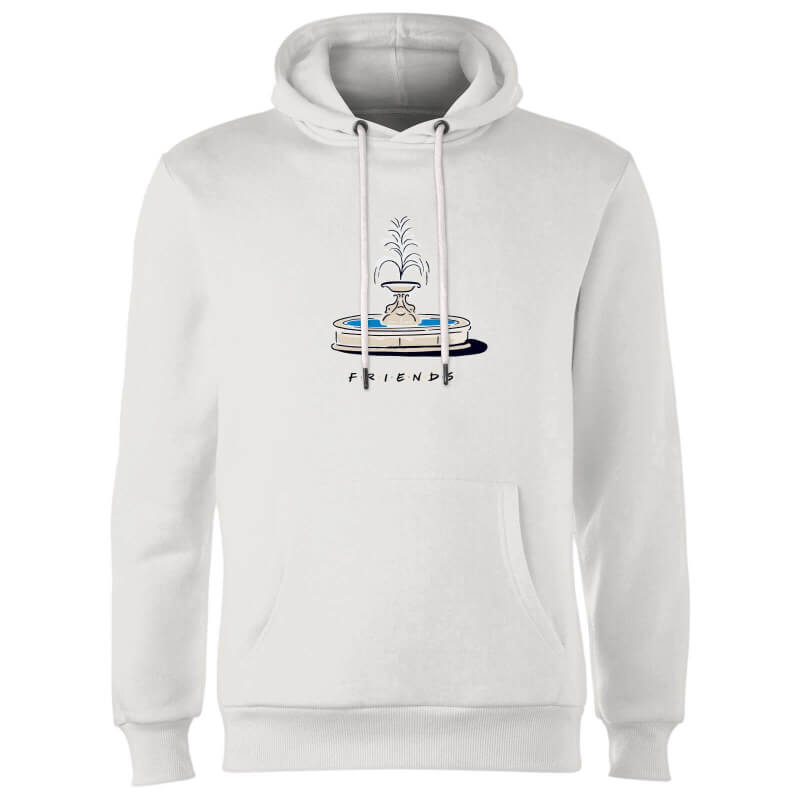 A simple yet cute design for neat Friends fans. By the way, did you know that the fountain from the title introduction actually resides on the Warner Bros ranch in California, not in New York? It probably doesn’t matter much for Friends fans who walk around Manhattan.
The hoodie is made from a preshrunk 80/20 cotton polyester blend. For a baggy look, get one size up. 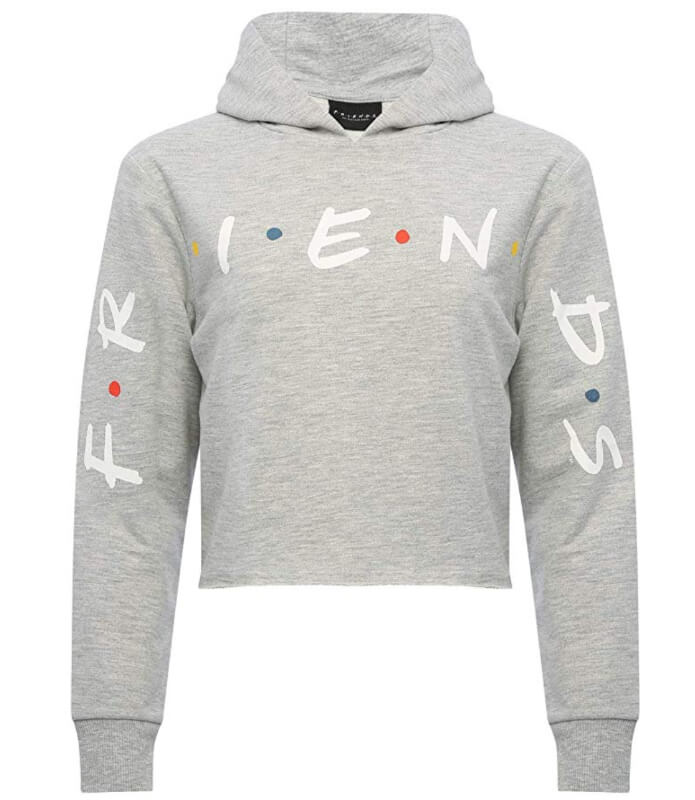 Teens were not even born when Friends were on TV, but Netflix helped them to get enamored with the fabulous cast and their jokes. 90s nostalgia is a trend for those who have never witnessed the 90s. But since they want to feel it today, merch manufacturers are willing to serve. Here is a cute and comfortable cropped hoodie for teen fans of Friends. 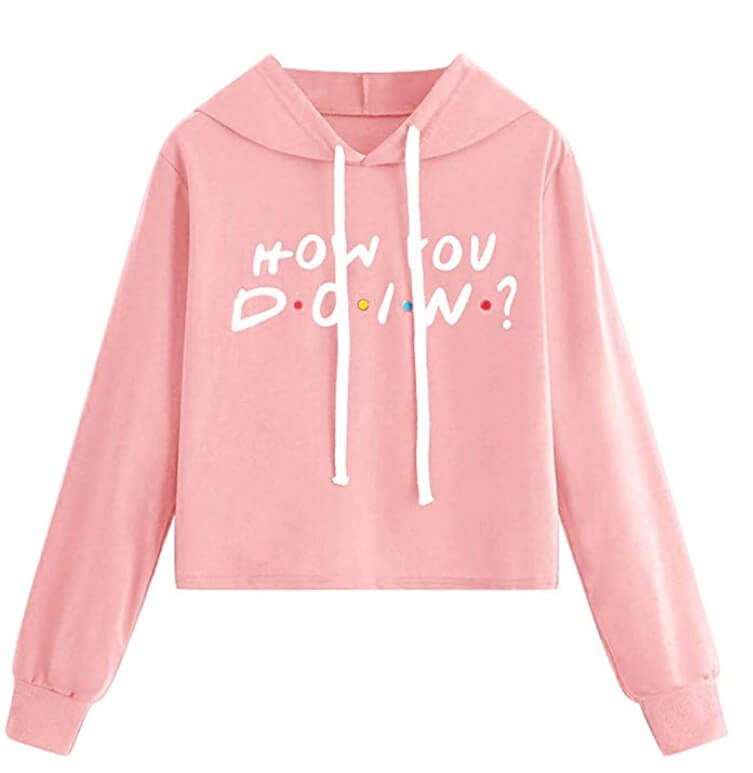 We agree, this hoodie is unbearably cute and Joey’s catchphrase makes it even cuter. Now you do not even have to say it, your top in pink will do all the new acquaintances pleasant and easy. The seller says that his clothes are small in size, so if you want it to fit, take one or two sizes up from what you usually wear. The material is polyester and shipping takes up to three weeks. 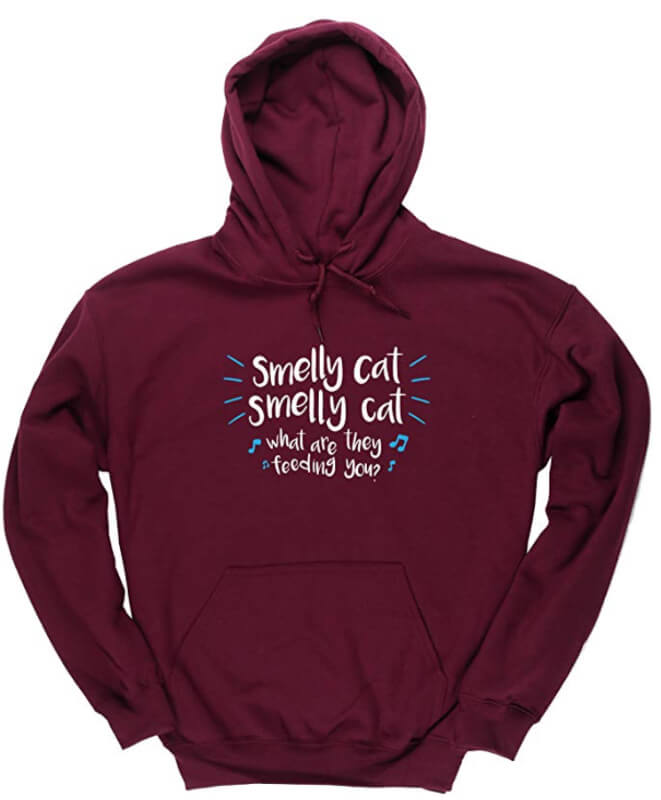 A pullover that’ll make you want to grab the nearest guitar and perform, arguably, Phoebe’s greatest hit. When you see this design, the song immediately appears in your head. You can choose your favorite color among ten options (they even have peppermint green) and have this hoodie custom made within 48 hours. 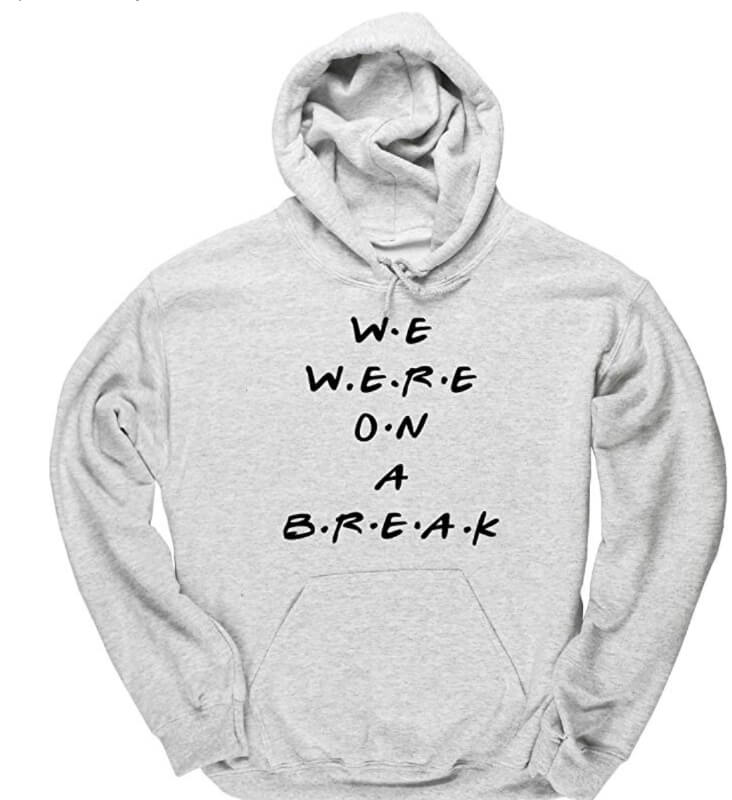 You already know that you can get a hoodie with your favorite catchphrase or joke in any color, but we just can’t get enough of them. Ross and Rachel’s relationship is one of the show’s main storylines and, with this hoodie, you can show exactly whose side you’re on during this debate. They were actually on a break. But, to be honest, we knew they gonna be together from the very beginning. 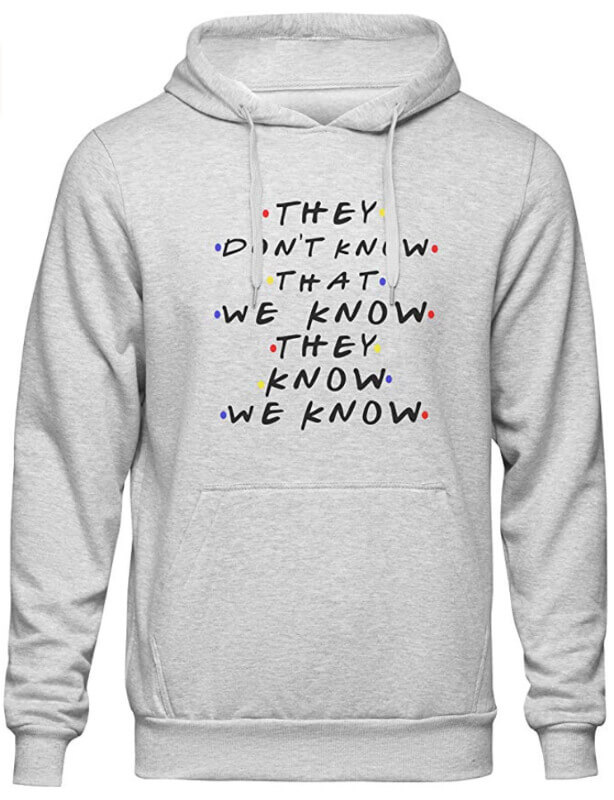 An iconic quote about one of the funniest situations on the dawn of Chandler and Monica’s relationship. They tried to hide their passion from friends but ended with two groups messing up with each other with Joey in between. This hoodie is 100% preshrunk cotton, super soft and skin-friendly. It is designed and printed in the EU. 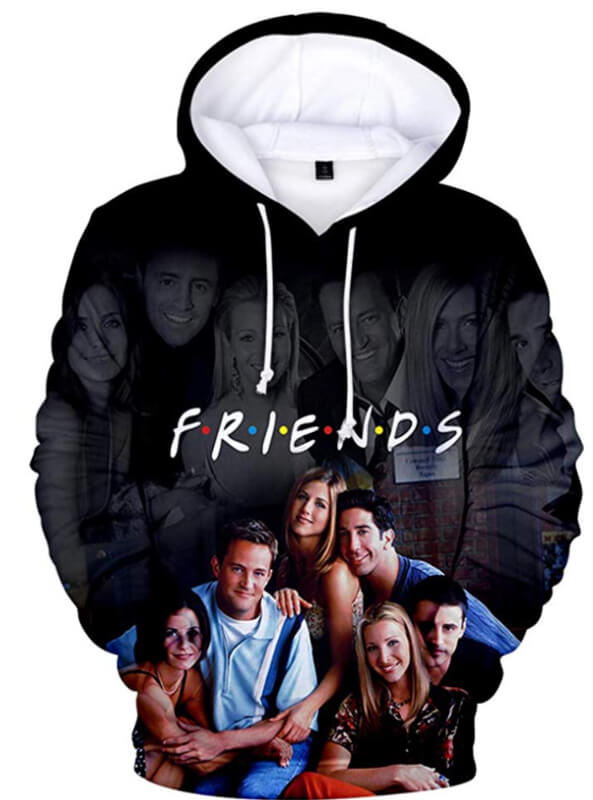 If you want all the cast to be there for you, try this top. The hoodie is made with a full cover graphic print, so friends are all over you. The material is comfortable cotton and polyester fiber, skin-friendly and soft. This hoodie conveys a message of friendship, happiness, and kindness. The seller argues to check in with the size chart before order and wash the apparel in cold water inside out. 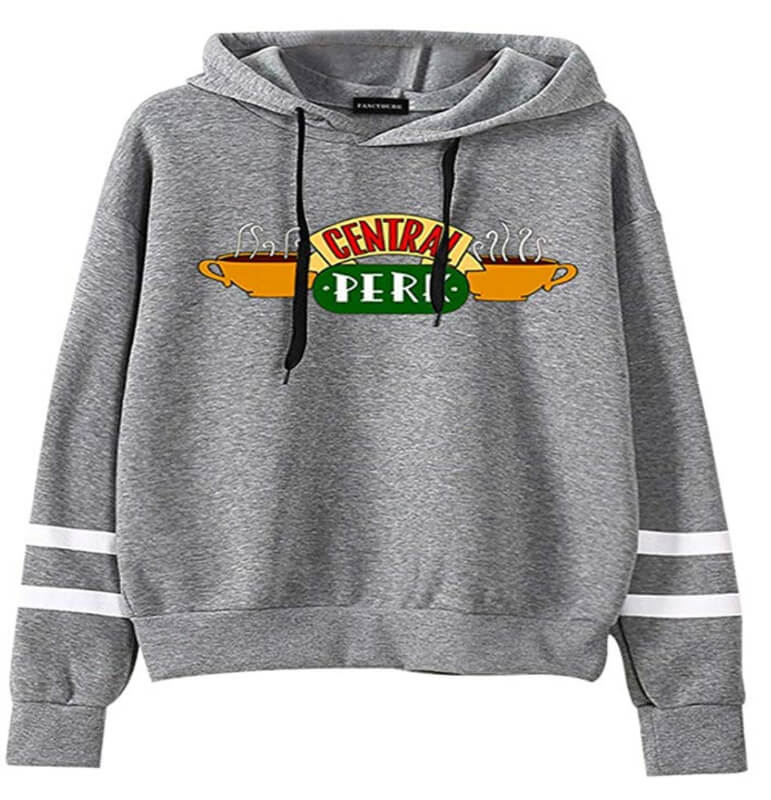 For Friends fans, Central Perk cafe is like Hogwarts for Harry Potter fans. It is a sacred place, even though it never existed outside the studio. However, there are tons of replicas around the world, which can make you feel like you are one of the six Friends, especially if you wear a nice hoodie. This pullover has a cute 90s vibe, which guarantees you get tons of compliments. It is made of poly-cotton mix, perfect with skinny jeans or leggings. 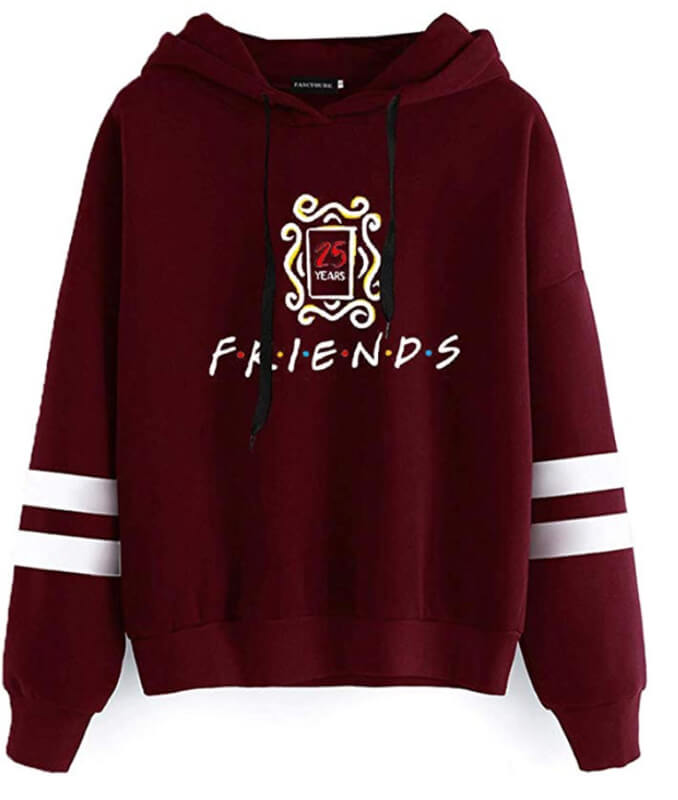 Friends brought us ten years of love and laughter, and we want to commemorate the quarter of a century since their birth on screens. This hoodie is a perfect gift for a fan or for yourself. It is casual enough to hang out with friends, and also a great reminder that things (or shows) can come and go, but friends stay together. The material is 95% polyester, 5% spandex. It is recommended to wash inside out in cold water.

Friends first aired in 1994 —since then, the characters never left our TVs or our hearts. Moreover, they continue to gain new fans among gen Z teens who have a craving for pre-digital friendship.

Can you be a true Friends fan without a hoodie with the iconic logo? You can try, but there’s no fun in it. Moreover, you can never have too much memorabilia to celebrate your favorite show. Luckily, the trend is so popular that new designs come out almost daily!