Why did NASA Hoodie Get so Trendy? 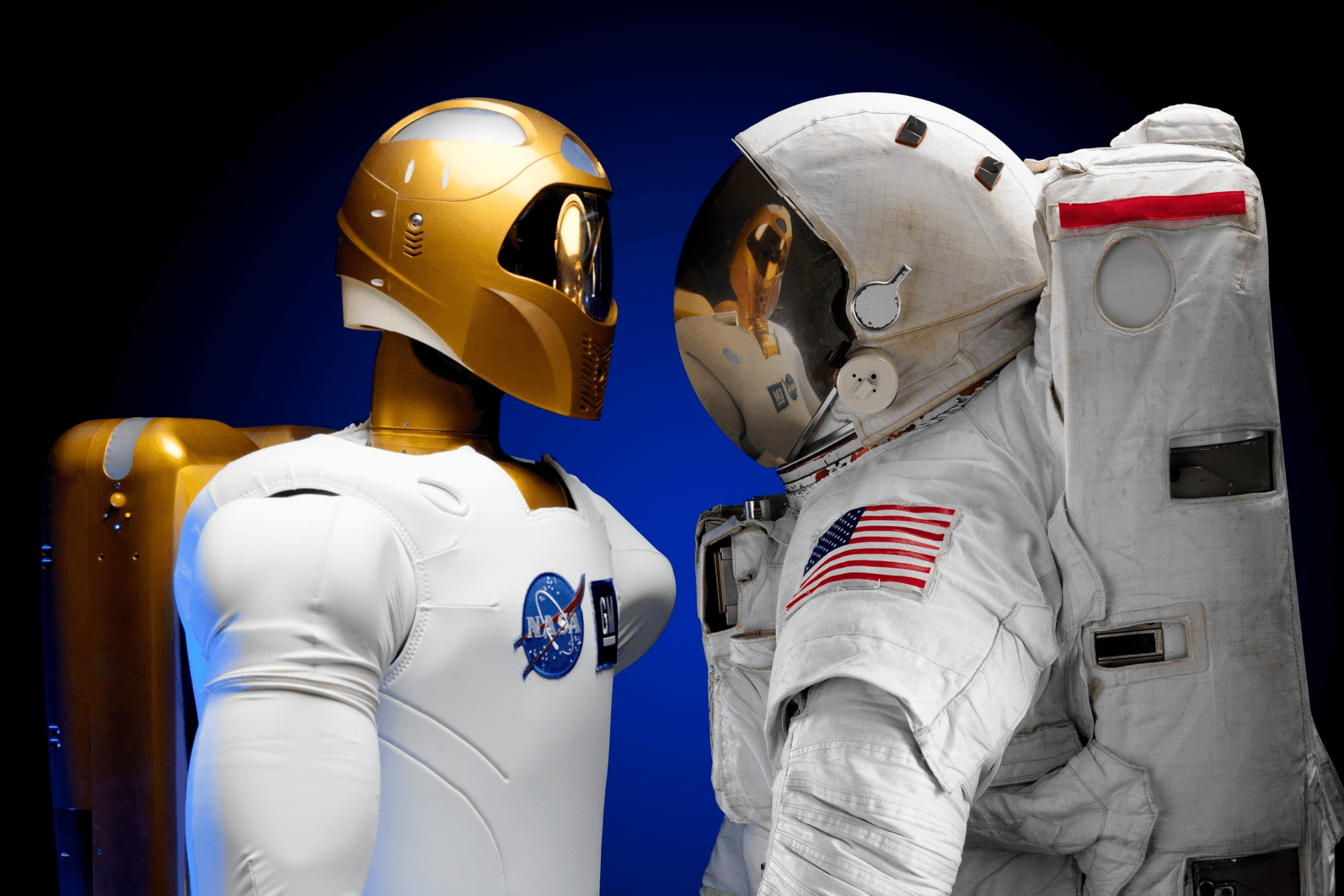 National Aeronautics and Space Administration, aka NASA, was established back in 1958, but it’s now more trending than ever. Which is weird. NASA has closed the shuttle program and has not launched a piloted mission from American soil for almost a decade. Many people are only vaguely familiar with its famous history of space exploration. However, it seems like NASA logos are more widely used on clothes than Gucci or Chanel, including fakes. You can spot NASA hoodies and t-shirts everywhere: from casual teen streetwear in mass-market shops to fashion magazine pages. Is it because of our childish dreams to become astronauts? Or for the love for space and science? Or is it just another marketing hype and people just wear what they see in a shop? Let’s take a look at what brings the popularity of NASA logos on apparel and where to buy them if you want to be on-trend.

NASA hoodie. Why So Popular?

NASA is hip. Hoodies and jackets with the space agency logos (both of them, but on that later), backpacks and even sports shoes patched with blue chips or vintage lettering have been trending for several years now. It started back in 2016 with celebrities wearing Alpha Industries NASA bombers and designers like Versace adding space-themed patches to their collection. Kylie Jenner posing on Instagram in a NASA sweatshirt was a big hit. Though her letters actually stood for a night club, the space innuendo was definitely there. 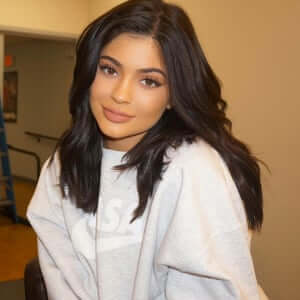 Today, we got another big splash of an aspiration to dress like an astronaut. One reason might be the recent news that NASA has a budget approved to send the first woman to the moon in 2024. But even when the agency was quiet, delegating media excitement to private companies like SpaceX, it still had this space appeal. At least, they are posting breathtaking pictures made by the Hubble Space Telescope. And we all want to see a human settlement on Mars in our lifetime, don’t we?

NASA’s coolness is undeniable. It mostly gets into news for doing some mind-blowing cosmic things like the robot’s arrival on Mars (set aside budget overrun). Even the things that happened half a century ago, for example, man landing on the moon, still look exciting today. The nostalgia only adds to the excitement. 1960-70 now seems to be the time when everything was possible and the future looked bright. 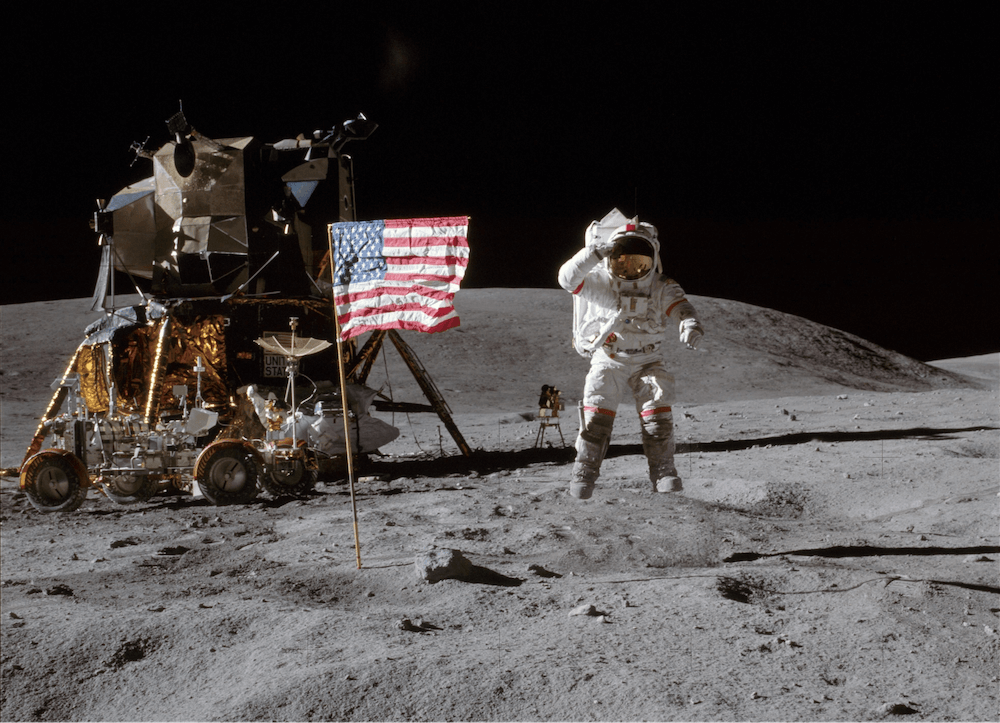 It is not about today’s NASA, but about the space exploration of the 1960s and 1970s. People are nostalgic for adventures like the first moon landing. Clothing with the “meatball” logo looks retro-chic and trending, especially in social media. Some people might be even unewear of NASA's history and achievements. They just like the vibe, the same as Coca Cola lettering or Kodak logo.

Interstellar in 2014, The Martian in 2015 and Hidden Figures in 2016 are just a few of the most famous movies that contributed to the NASA brand recently. All of them feature NASA logos; the last one was even filmed at the facility. Moreover, Hidden Figures appealed to the female audience. The movies had exposed the space agency brand to a broad public in a very positive context. They say that NASA is both nostalgic and progressive, patriotic and beyond politics. It is everything that you want to be, in a classic Hollywood style. In 2017 Pharrell Williams wore a NASA sweater to the Oscar Nominees Luncheon.

The pop culture also added to space appeal. For example, American sitcom The Big Bang Theory is responsible for making nerdism mainstream. It is not embarrassing anymore to be a geek, who knows the names and birthdays of all actors of the favorite space movie. And it turned out, the market for nerds is quite a big niche.

Popstar Ariana Grande also contributed to NASA's relevancy for a younger audience with her buzzy, self-care single with the same name. She even created a line of NASA merch with her own font that resembles the worm logo. The hoodies and t-shirts debuted at Coachella 2019. They have retro vibes and space agency's iconic logos, and Neil Armstrong’s quote adapted for girl-empowering purposes: "This Is One Small Step for Woman, One Giant Leap For Woman-kind". 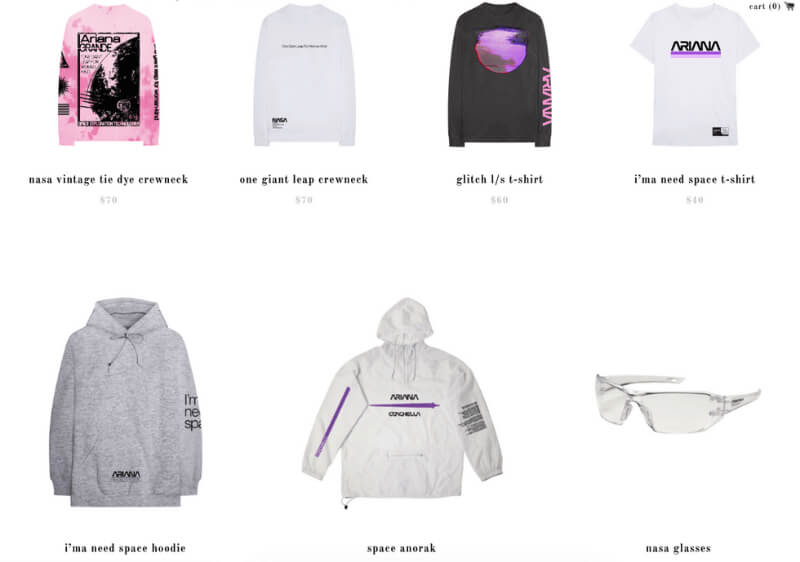 Without doubts, the NASA insignia is simply aesthetically awesome. The one called “meatball” dates back to 1959 and the origin of the agency. The blue circle with stars and a red chevron was created by James Modarelli. The sphere represents a planet, stars are for space, the red wishbone is a hypersonic wing of aeronautics, and it also has a white orbital path. Previously known just as an insignia, it started to be called the “meatball” when NASA decided to look for a new logo in 1975. And they let Richard Danne and Bruce Blackburn create the “worm” - modernist sci-fi letters. Almost two decades later, in 1992, the “meatball” was reintroduced as the official NASA logo. However, both designs are now in the fashion orbit, since both are undeniably stylish. 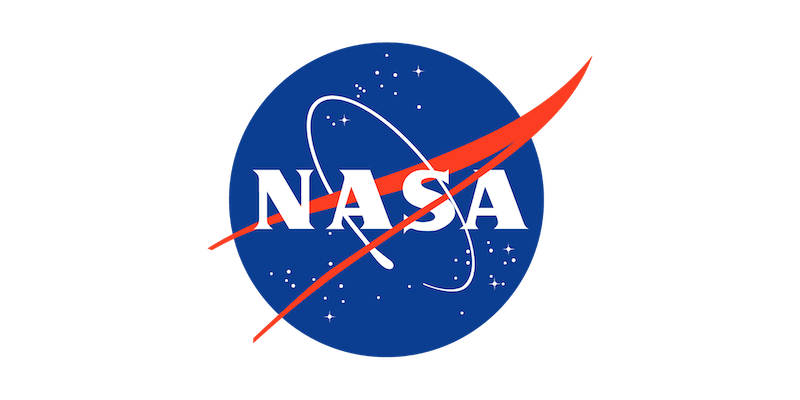 A lot of people wear NASA hoodies just because they are affordable and accessible, just like any other hoodie in the store. They can be found in Target alongside Star Wars and Pink Floyd tees. Some of them have a retro appearance, deliberately faded colors as if these clothes were exposed to sun and wind for many years. They are comfortable, trendy, stylish and they cost only 20 dollars. You can find them in almost any mass-market store from Primark to H&M.

Some people do not want to make a statement; they want to buy what is easy to buy. But Target would not sell these clothes if there was no market for them. 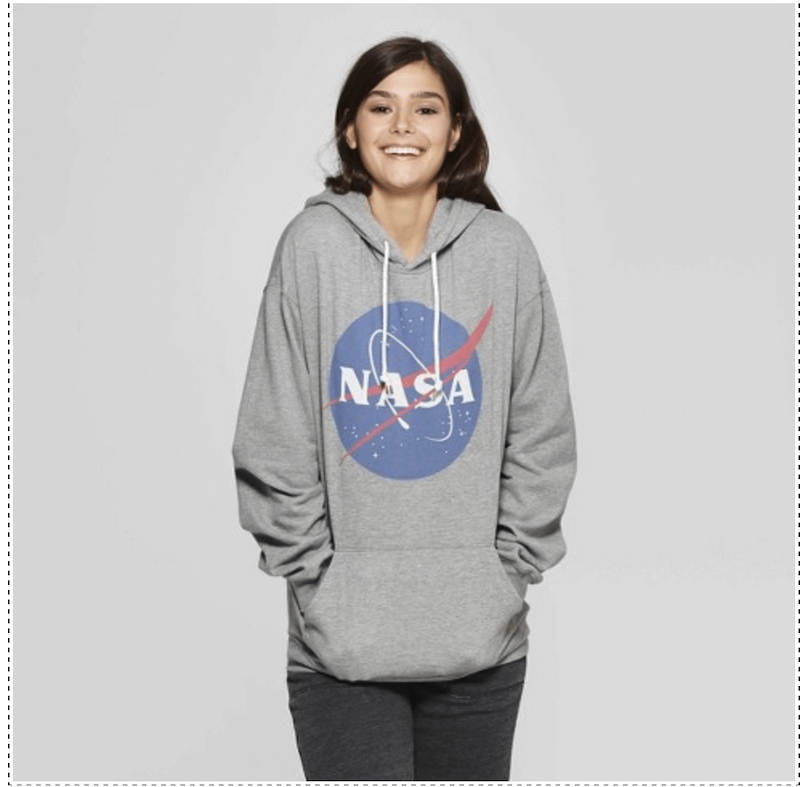 You will not see logos of the US Air Force or National Atmospheric and Oceanic Administration in the same place. Are they not exciting, too? However, it is NASA that had such a broad appeal. It fits everywhere. Unlike other governmental organizations, there is almost nothing to dislike about NASA. At least the NASA we feel nostalgic about.

Moreover, not all federal agencies allow their logos to be used on commercial products. The National Park Service, for example, does not.

How do brands get permission to use NASA logos? Unlike usual collaborations, they did not request licenses nor did they pay for it. To put a “meatball” or a “worm” on a hoodie, a company just needs to send a request and suggested designs of its clothes to the Multimedia Division of the government agency. After a review, most permissions are granted and this is totally free. NASA does not benefit from your cute retro-vibe hoodie or t-shirt. Which is a little bit why, since brands make millions on it. At least something could go back to the agency to support the research.

The turning point happened in 2017. Bert Ulrich, chief of the Multimedia Division of NASA's Office of Communications, it was a limited collection of space-themed purses by Coach that provoked the biggest wave of applications. The apparel brand asked permission to use the worm logo from the 70s. It has never been approved for merchandise before. But when the collection skyrocketed in popularity, the logo did so as well. Before May 2017, the agency received three to four requests a month. Now someone is appealing for permission almost every single day.

There are very few limitations to the use of logos. First, NASA does not give permission to anything linked with alcohol and tobacco or something that can harm the reputation of the organization. Second, according to NASA standards, designers cannot change the “worm” colors and style. Sorry, no pink and sparkles, colors are limited to red, grey, white and black. Note: when Vivienne Tam did her collection, there were no such rules yet. No restrictions apply to the “meatball” logo. However, companies are not allowed to put their own logo or any other elements visibly close together with NASA’s. It should be taken out to a tag, for example. 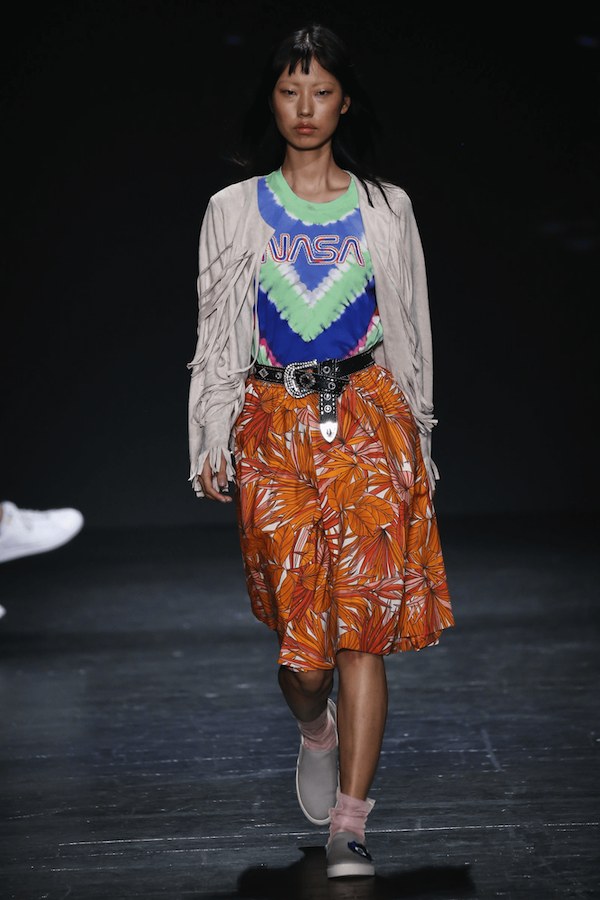 Since anyone is free to use NASA’s signifiers and there is no exclusivity to it, the agency is now dealing with a continuous flow of requests. Apparel makers like Target, Nike, Walmart, Forever 21, Topshop, and Urban Outfitters are among those who asked to use the “meatball” or “worm” images for their merchandise. As well as almost every major chain. They incorporate the official logos into their T-shirts, hoodies, sweatshirts and so on. 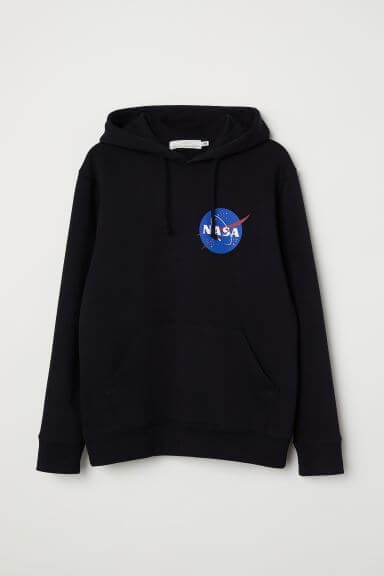 H&M Nasa hoodie is a staple of any teenager's wardrobe. Especially the one that dreams about space and adventures or just wants to impress their followers without going to eccentric. It costs only 15 dollars and you can choose from multiple colors and design options.

Brands like VFILES played with patches and pins on jackets. Jumpsuits looking like spacesuits are also a fashionable thing, especially in orange. 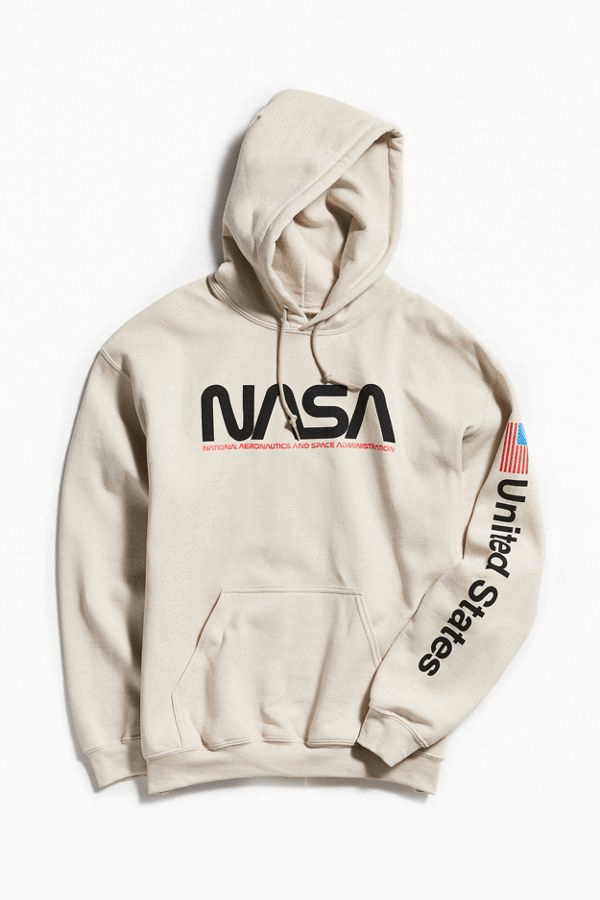 Alpha Industries, which produced the jumpsuit mentioned above, made an entire collection dedicated to space and NASA. It’s become popular recently to celebrate America’s history of space travel since NASA just turned 60. AI created patches for 12 Apollo missions so you can customize your flight jacket. They also have hooded jackets and t-shirts. Even now, several years after the release, these clothes cost about $200 dollars. 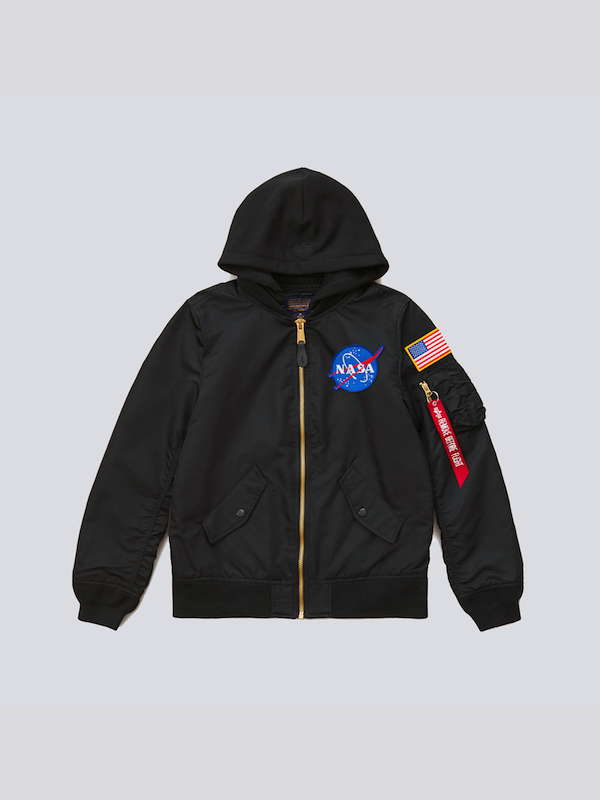 As for shoes, the most famous is probably Vans’ Space Voyager from 2018. They are also made to commemorate NASA’s 60th anniversary and were inspired by textures of the original space gear. However, the popular brand for skaters did not stop on sneakers and presented hoodies, tees and bags as well (though no longer available at the shops). In 2019, Nike also released NASA-themed sport shoes in collaboration with Paul George.

Unlike most trends that emerge on the runway and then go to the mass market, the obsession with NASA logos seems to go backward. After they appeared in Target, a famous New York streetwear designer Heron Preston also made a collection with NASA insignia, claiming he was working together with the organization. His line includes not only outerwear but also hoodies and pants, t-shirts and even socks and belts. A backpack from this collection is said to be modeled off the Apollo astronauts life-support system. And for the sake of promotion, Preston sent a mannequin in these clothes up to the stratosphere. However, the prices are also a bit cosmic: starting from $85 for designer socks to over $300 for a t-shirt, $420 for sweatpants, and nearly $1,900 for a parka. 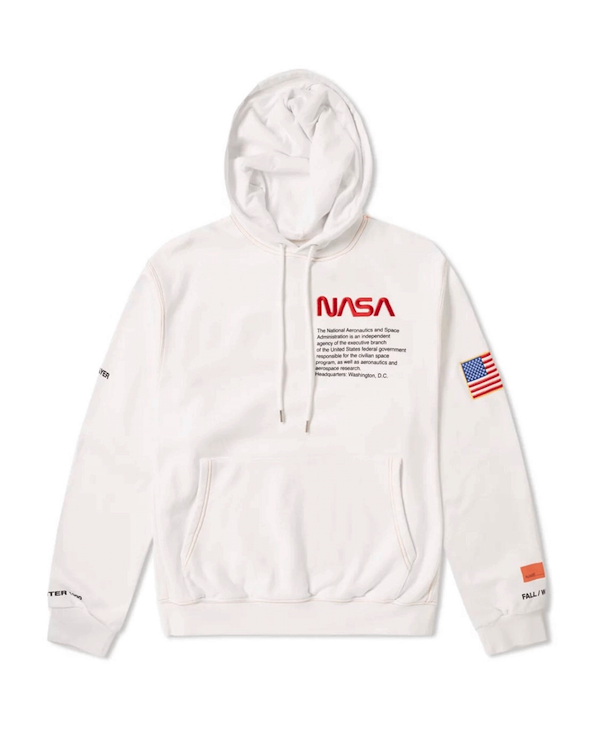 Of course, you can buy an original NASA hoodie from the official shop at Kennedy Space Center. It was open back in 1992. They have authentic designs and affordable prices. And by buying from the official shop, you can in fact show your support to NASA not only with a logo but with a dollar as well. And it looks like a lot of people do so: last year the gift shop's sales were up 15% compared to 2018. Apparel makes 48% of the revenue with logo t-shirts and hoodies being the bestselling items. 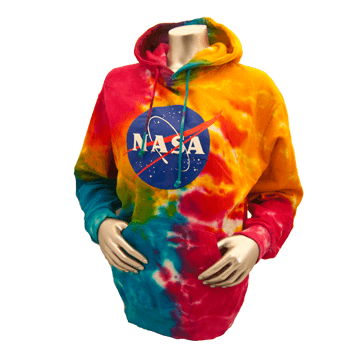 A NASA hoodie at the official store costs $25-40 dollars

The NASA logos have appeared on various clothing over recent years. From outerwear jackets to comfy hoodies, from casual tees to fashionable pants as well as sneakers, backpacks and even baseball caps. We love NASA because it stands for science, education, furthering humanity’s discoveries, and creating possibilities for the future. It does feel like a combination of curiosity and nostalgia is helping the space agency to make a giant leap toward becoming a long-lasting trend, especially among millennials.