Why is everyone obsessed with an Anime Hoodie? 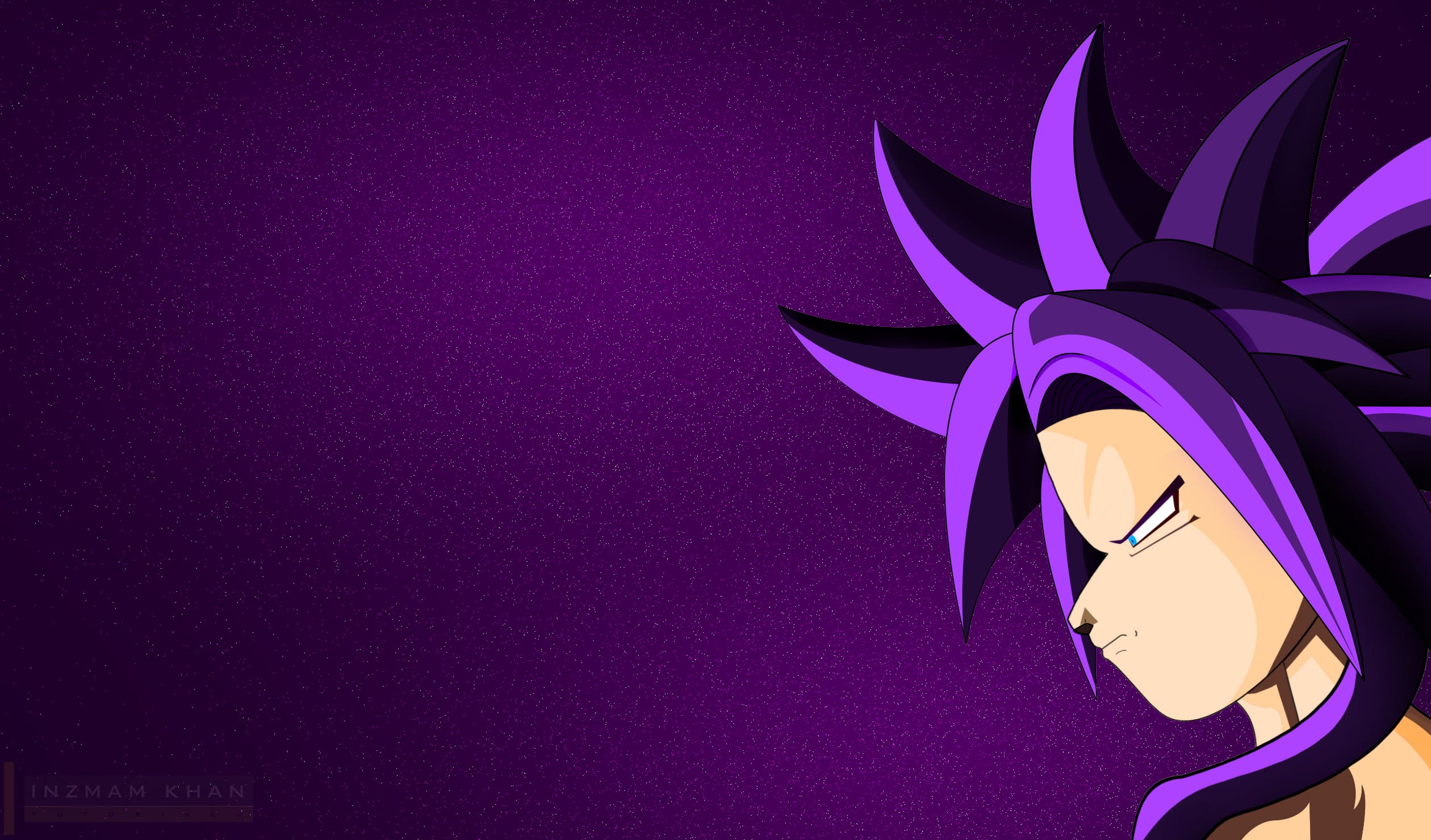 In Western culture, cartoons are generally for kids. That is why for a long time, outside its native Japan, anime was considered a nerdy niche subculture. All the sophisticated symbolism and tangled plot lines enjoyed recognition only from die-hard fans or when Hollywood produced a remake. But things have changed. Anime has grown more mainstream, drawing the attention of fashion designers and enthusiasts. The variety of Japanese fictional heroes have settled on hoodies and t-shirts of streetwear brands.

In Japan, the term “anime” refers to any animated medium. However, in the West, this term is used for Japanese cartoons only. Not so long ago, its fans were stigmatized by society as weirdos, unwilling to grow up. Today, fast-fashion stores are full of anime-inspired clothes, even though most customers still do not know the names of the characters on their hoodies.

Back in the 80s, the young American audience was enjoying English dubbed and edited Robotech and Voltron on Sunday mornings. With time, the list of Japanese series on western TV grew. Till the beginning of the 2000s, it became quite mainstream: Cartoon Network had entire blocks for anime with more and more shows were being translated in English immediately after the release. Children who watched Dragon Ball Z and Sailor Moon, Pokémon and Mobile Suit Gundam are now young adults who dictate fashion trends with their nostalgia.

Artist and skateboarder Jeremy Klein’s brand Hook-Ups was a pioneer of anime-inspired clothes in the 90s. His unrealistic naughty manga-style female characters caused a lot of buzz and were even banned in some schools. In 2013, Hook-Ups collaborated with The Hundreds, reintroducing their Adam Bomb mascot in anime style. 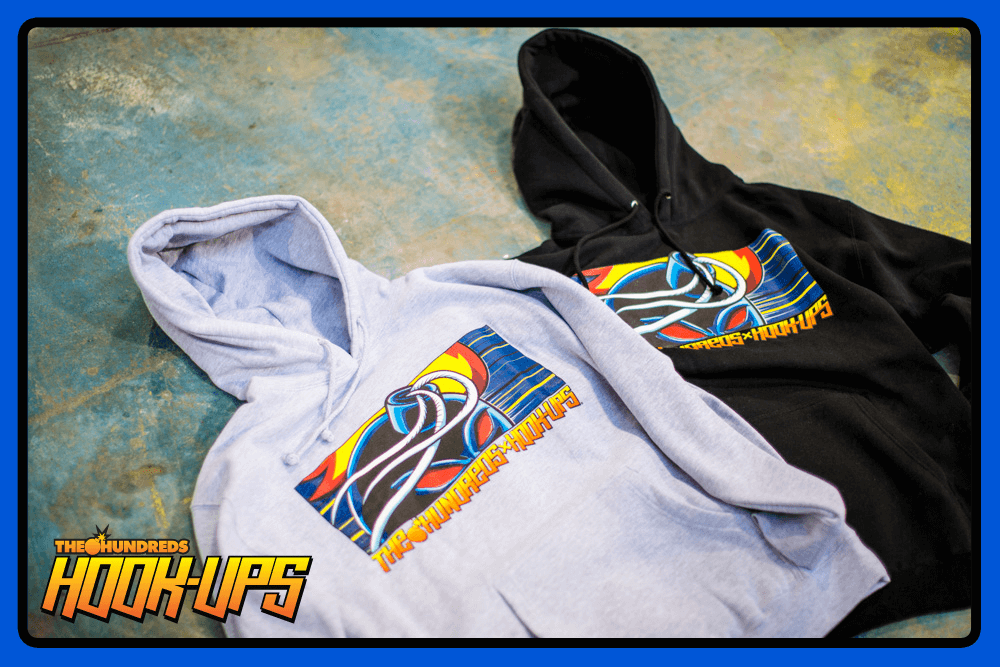 Anime hoodie by The Hundreds and Hood-Ups

By 2010, Americans watched new dubbed series of Naruto and Fullmetal Alchemist together with the Japanese audience. Video games like Street Fighter and Final Fantasy were often seen as an extension of anime because of a similar drawing style and narrative. They connected people, and the anime culture in the US was growing more and more hardcore. Of course, it was reflected in fashion. In 2008, a now-defunct brand Triumvir collaborated with game company Capron to create a streetwear line featuring Street Fighter‘s most iconic characters. 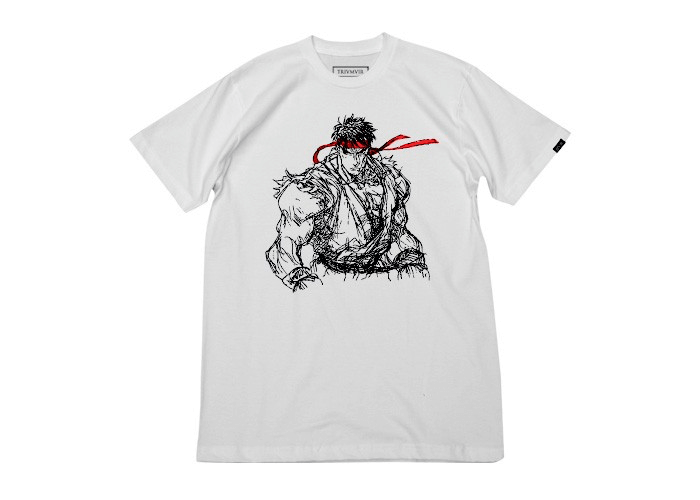 Anime clothes are so popular because both streetwear and anime depend on a strong visual language. Mixed together, they create a natural synergy that works extremely well. Even labels like Supreme searched for collaboration with Japanese artists. In 2017, the author of an iconic film Akira Katsuhiro Otomo joined the brand to create a collection of hoodies, polo shirts, jackets and accessories, featuring iconic frames from his post-apocalyptic cyberpunk. 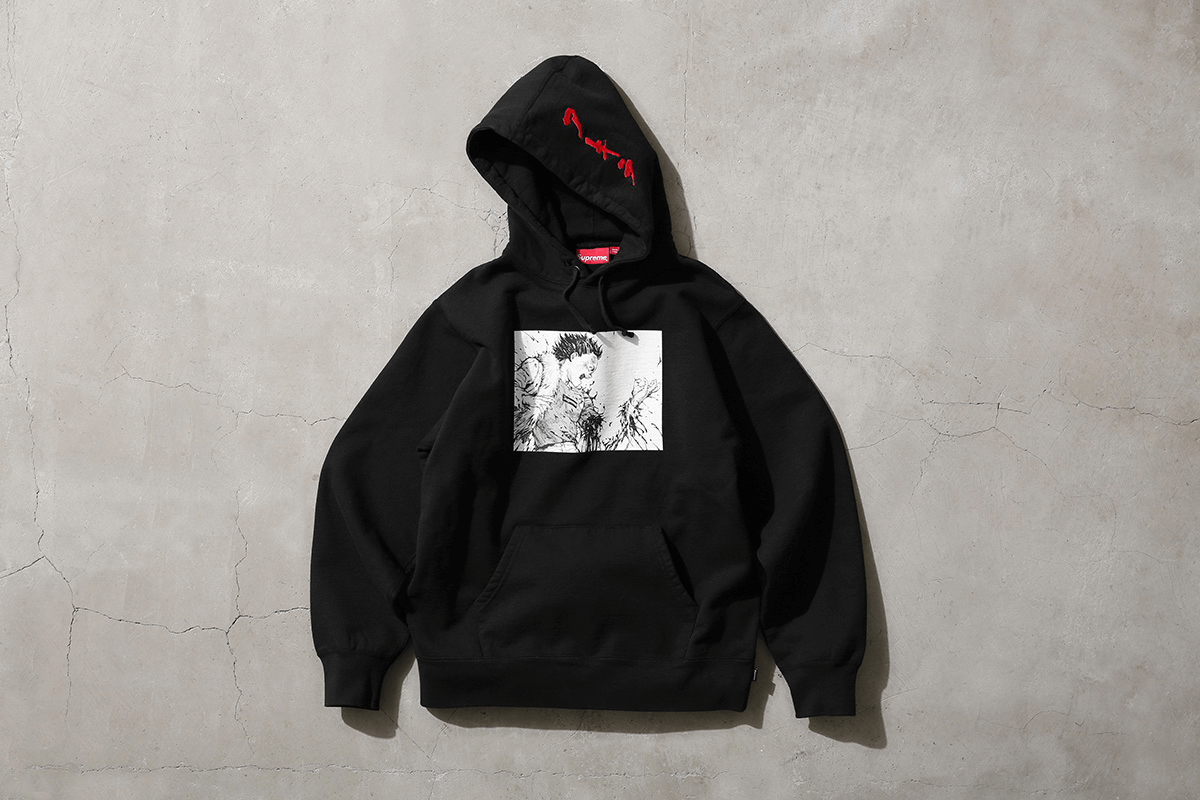 Another famed streetwear brand, Bathing Ape, teamed up with Akira Toriyama, the creator of Dragon Ball Z series, in 2015. The capsule collection of graphic hoodies, sweatshirts and other goods featured muscled martial artists Goku together with BAPE’s own mascot Baby Milo. This hoodies are nostalgic, cute and pricy. You can buy them now on Grailed for 350-500 dollars. 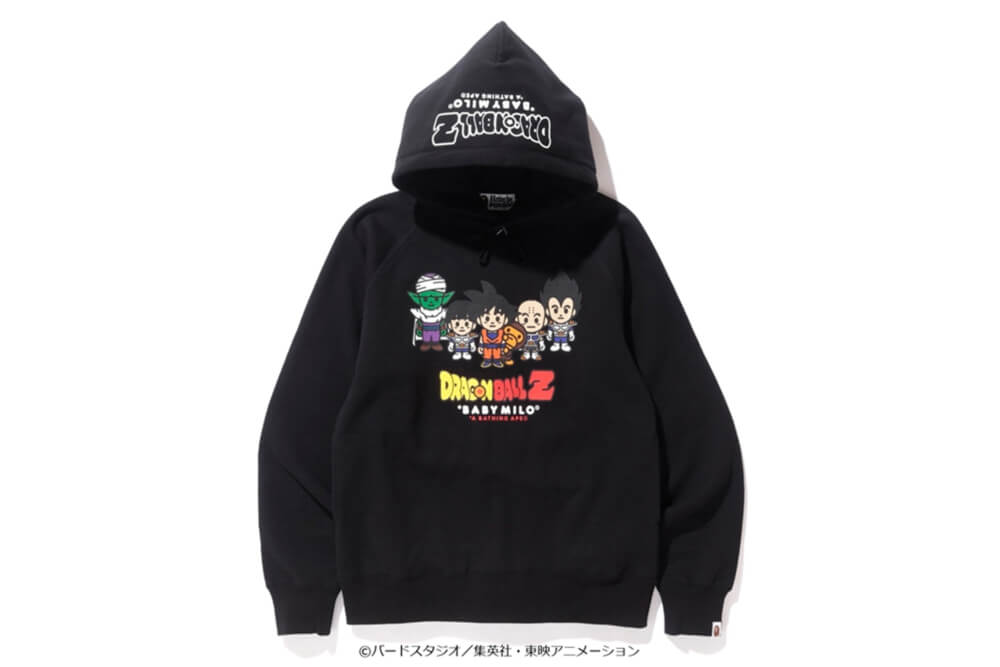 Luxury brands sourced inspiration from anime too. Back in 2007, Prada designed costumes for Appleseed Ex Machina — a Japanese computer-animated film with a main female character and her cyborg partner. In 2012, the house also styled the anime cast of Final Fantasy XIII-2 for Arena Homme+ magazine.

Louis Vuitton came into action in 2016 with a campaign starring Lightning, a protagonist from Final Fantasy XIII. The animated character appeared on billboards and in magazines and even gave “exclusive interviews.” Manga graphics were seen in collections of Loewe in 2016 and, again, in Prada S/S 2016. Anime made it from subculture to a runaway. 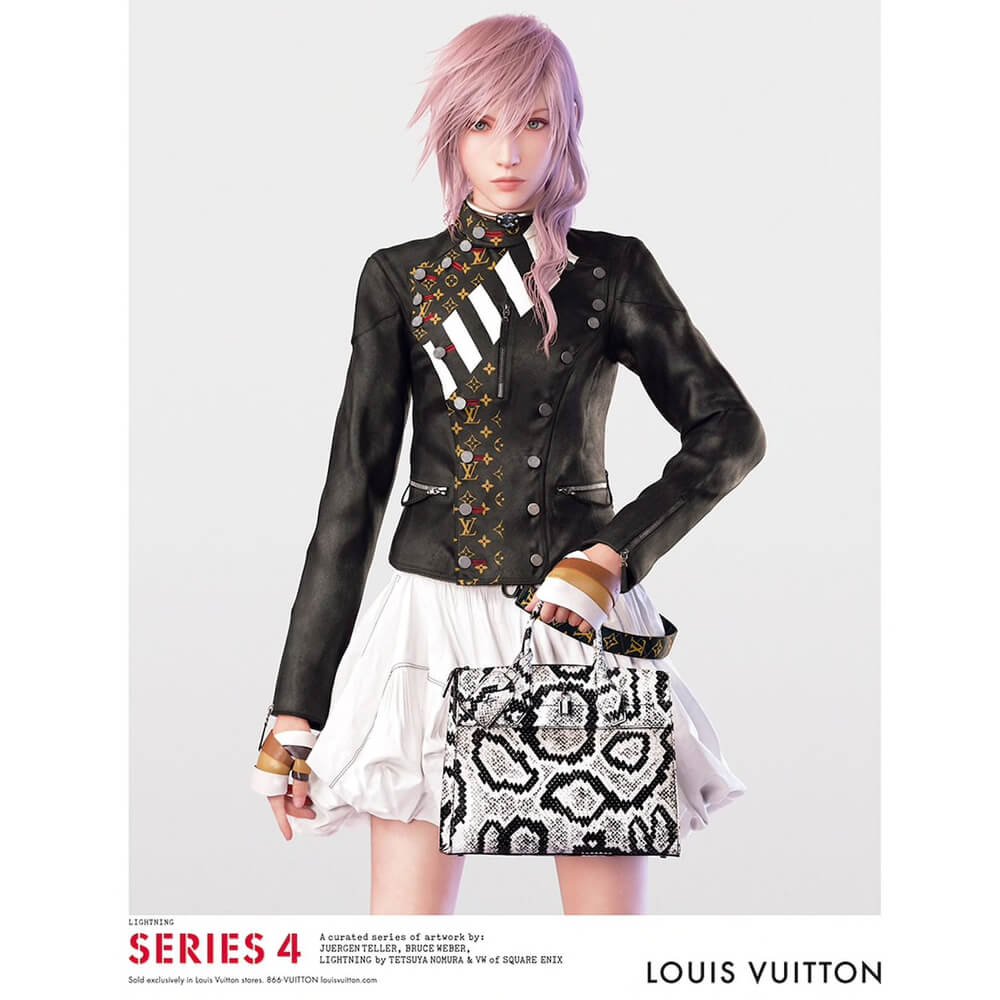 Anime-inspired clothes are all around the mass market as well. H&M first introduced otaku and anime-inspired prints to their stores in 2015. Japanese retailer Uniqlo drops such collections every now and then. For example, they celebrated the 50th anniversary of manga magazine Weekly Shōnen Jump with graphics from Naruto, One Piece, and Dragon Ball Z. Most of their designs are thoughtful and conceptual, targeted on true fans. 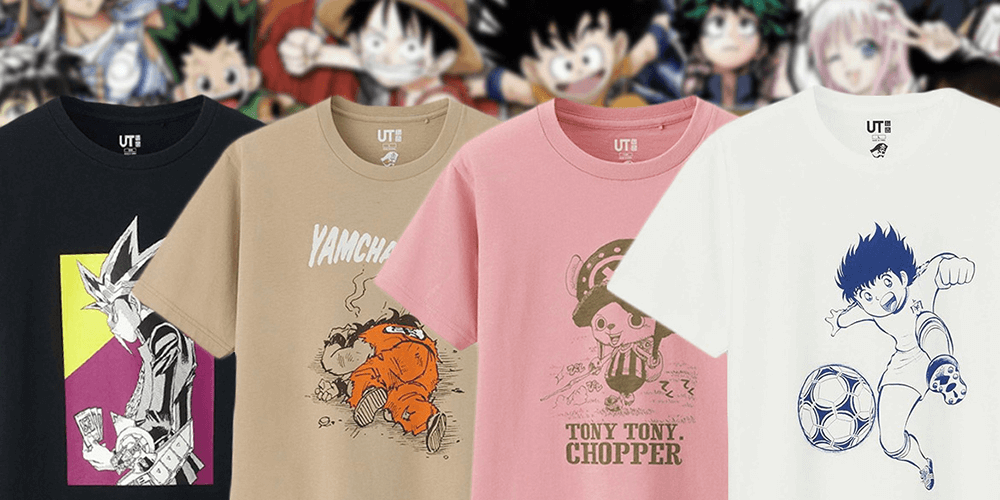 Most Popular Characters for Anime Hoodies

Nowadays, anyone can make a custom t-shirt, sweatshirt or hoodie with any print you can imagine. Moreover, you can find tons of unbranded pieces with favorite characters on web giants like Amazon or Aliexpress. It is close to impossible to make a comprehensive list of the most popular anime characters. But we, at least, can try to name those who appear on clothes the most.

Shotaro Kaneda from Akira. The above-mentioned cyberpunk odyssey Akira is praised by many as the greatest anime film of all time. It touches themes far from childish: nuclear fallout, apathetic society and tragedies of war and militarism in general. For nearly 30 years since it’s been released, the film has influenced countless designers and hundreds of thousands of fans, for whom read leather jacket is inextricably associated with the main character Shotaro Kaneda. 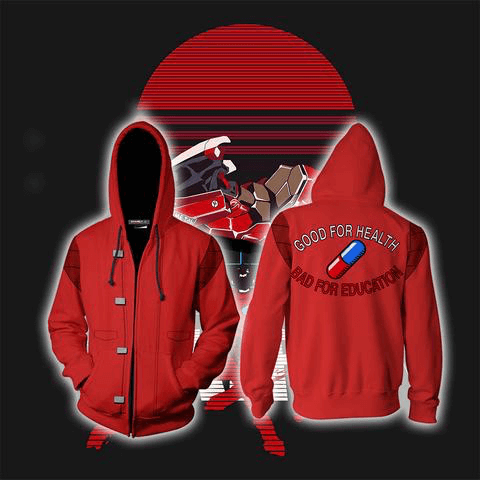 Son Goku is the main protagonist of the Dragon Ball Z. He is usually pictured as an eccentric, monkey-tailed fighting boy with superhuman strength. Another character from the same series is controversial and complex Vegata. Once an evil maniac and sadist, he actually turned out to be a good guy. 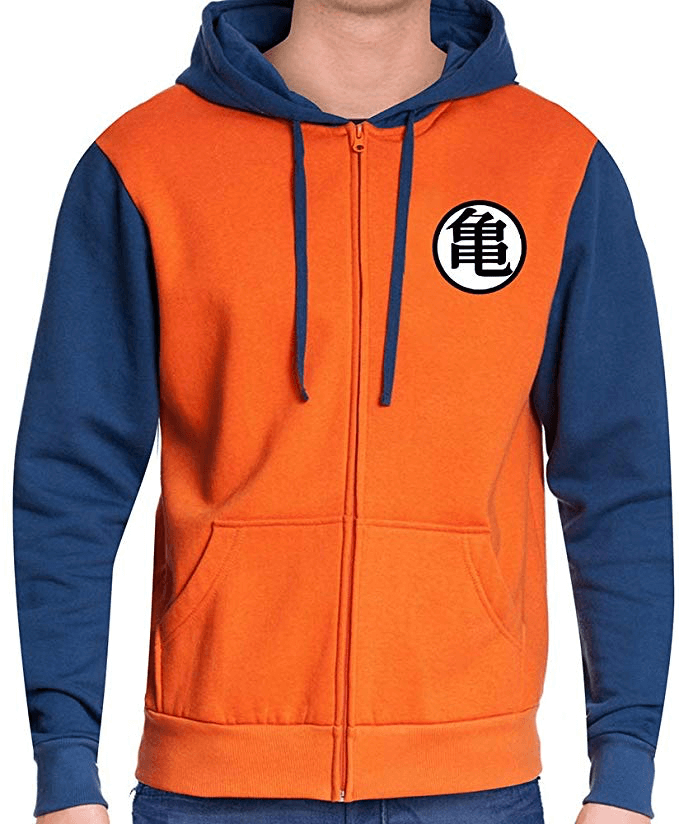 Naruto Uzumaki from Naruto series is a young and loud ninja kid, who is looking for his place in the world and wants to become the best in this village. This manga is one of the bestsellers in the world with over 235 million copies sold, and the franchise goes far beyond the series and books. Naruto’s rival and best friend Sasuke Uchiha is another popular character from this anime, along with Akatsuki clan, the mysterious villains. The anime hoodies of bad guys from this series are even more popular. 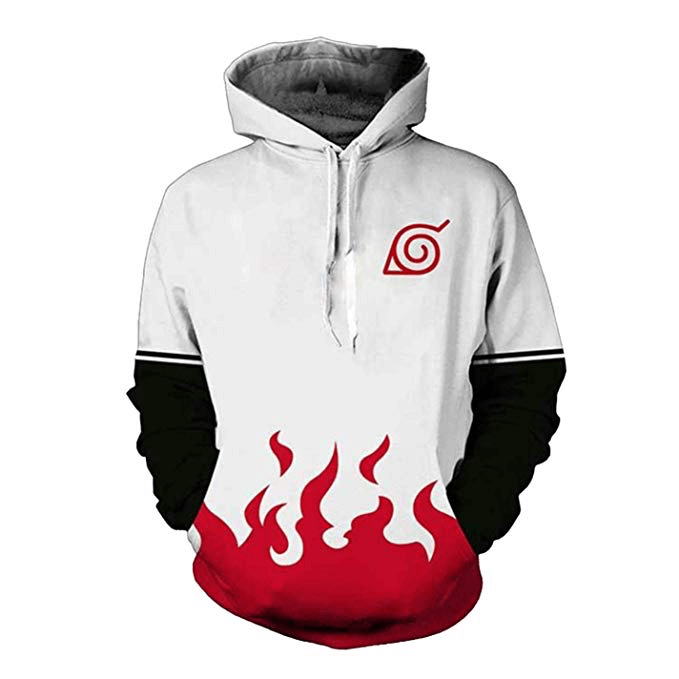 An example of Naruto hoodie from Amazon

The Death Note series are on the top of many anime ratings, so the clothes with its main character. This is the story about a student named Light, who accidentally gets the notebook of the god of death and becomes able to kill bad guys. An eccentric detective L tries to stop him from being a serial murdered.

Lupin the III is one of the oldest anime in this list. The manga series started in 1967. It is the story about the world’s greatest thief. Though he is a criminal, he is charming, kind and intellectually genius.
The world of anime is huge, and everyone can find heros to his or her taste. There are series where people or robots just fight each other for the sake of ultimate good or evil and there are those exploring complex philosophical ideas (like Cowboy Bebop or Akira). 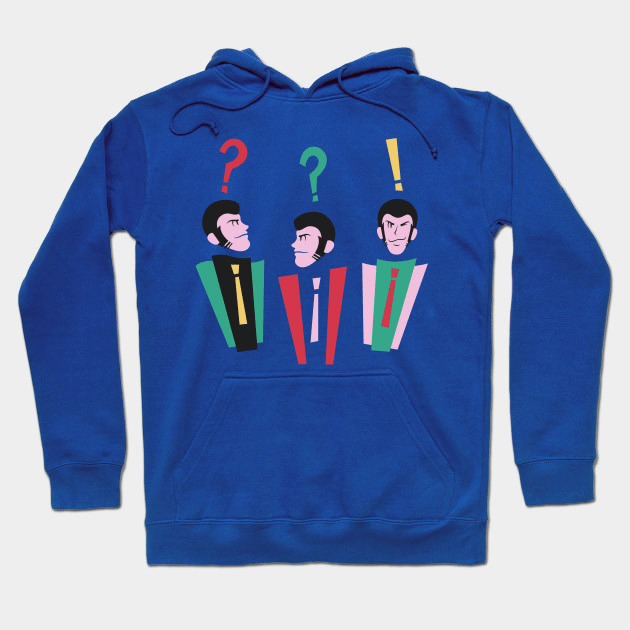 There are a lot of brands and retailers that sell anime clothes either inspired by some series or with their own design. Some examples are Kaomojii, Omocat and Tokyo Goods. They have a lot of original anime hoodies priced 70-100 dollars. But there are also tons of cheaper shops at Aliexpress that sell very recognizable anime items.

There are two ways of wearing anime clothes: cosplay (basically wearing a costume of a character) and more simply showing off your favourite series on the tee-shirt. In both cases, anime fans used to be stigmatized just several years ago, labeled as childish or nerds. People looked down on them and made jokes. But now, the same people admire brands like Supreme, collaborating with manga artists.Cosplay is a separate culture with festivals devoted to it, while anime itself is becoming more mainstream. Japanese animation is seen in fast-fashion stores and haute couture collections. Any attempt to cover all the cultural and fashion impact of anime would be a huge undertaking. It still has not crossed the line of mass culture so it allows wearers to stand out of the crowd.