You Matter Hoodie by Demetrius Harmon 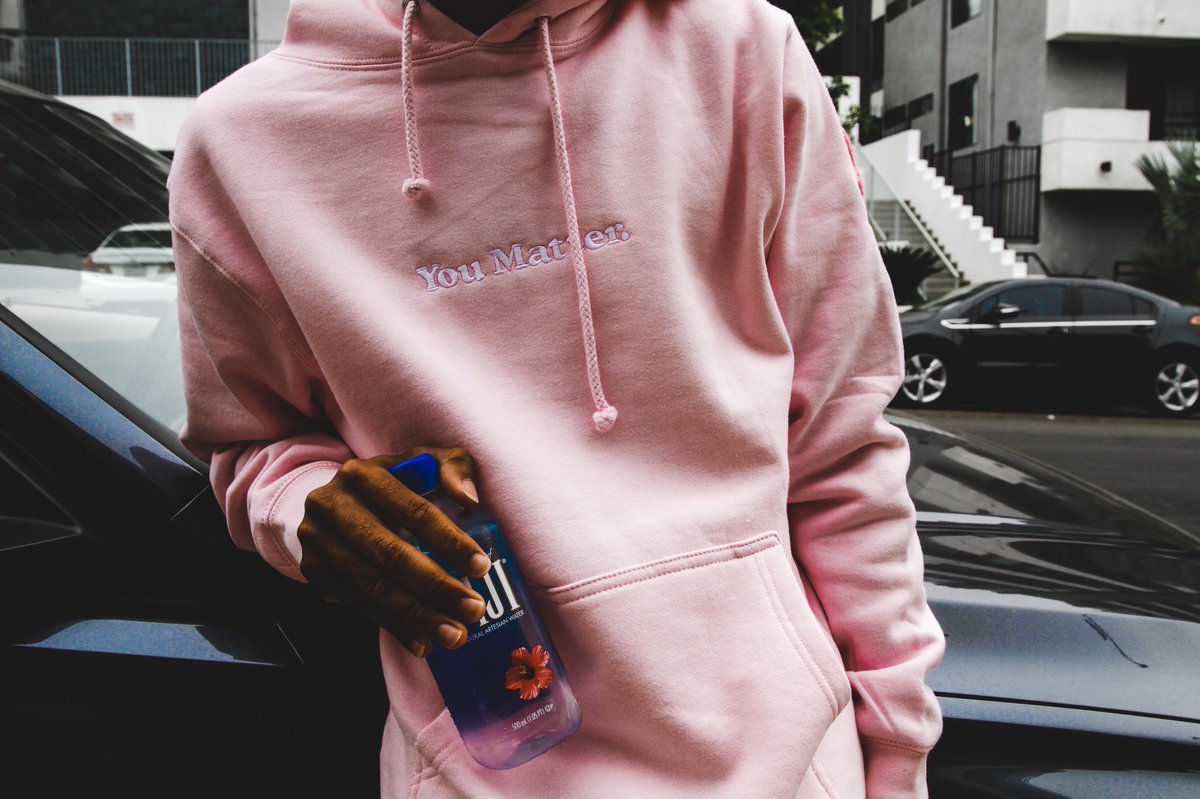 The You Matter hoodie was created by an internet comic celebrity Demetrius Harmon, also known as Meech on Mars. He is one of a few influencers openly speaking about his own mental health problems and supporting people with depression.

When an internet celebrity turned self-help guru releases a clothing line to support mental health, it quickly becomes a thing. You Matter hoodies by Demetrius Harmon are created to help people speak up about their feelings and be heard. Though being a comic, he has suffered depression and even harmed himself. Now with his clothes, speeches, and poetry, he expresses himself and tries to make a difference. 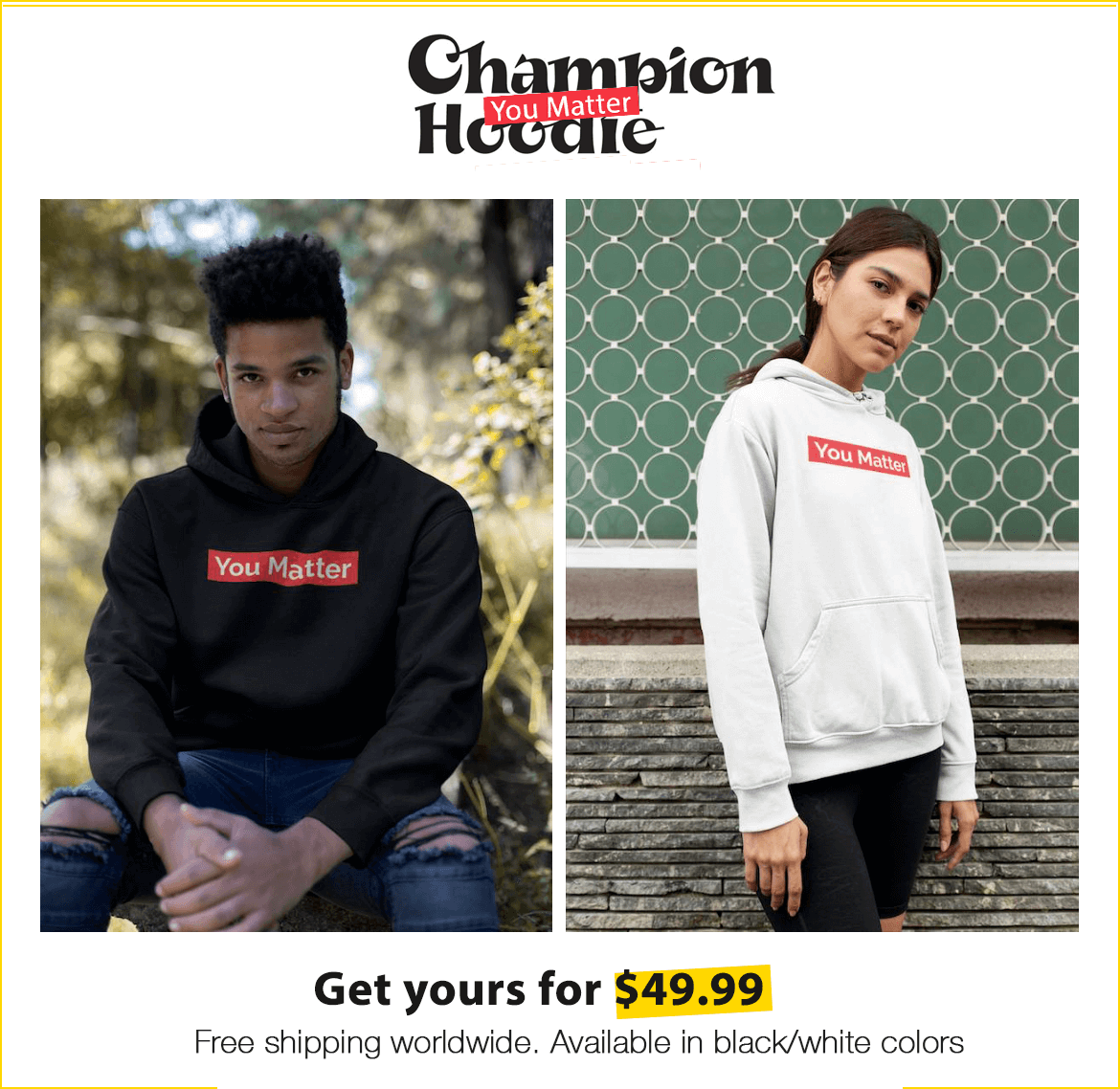 Check these black and white hoodies on ChampionHoodie store.

Who Is Demetrius Harmon?

Demetrius Harmon is an internet celebrity formerly known as MeechOnMars. At 21, he is an actor, model, and poet, who turned his digital fame into a grandstand for a social campaign about mental health issues and self-love. He is rather experimental with his looks, dying his hair and wearing beard sans a mustache with a diamond nose pin and earrings. His style is sporty, lazy and casual, but his baggy You Matter hoodies are desired by hundreds of thousands. 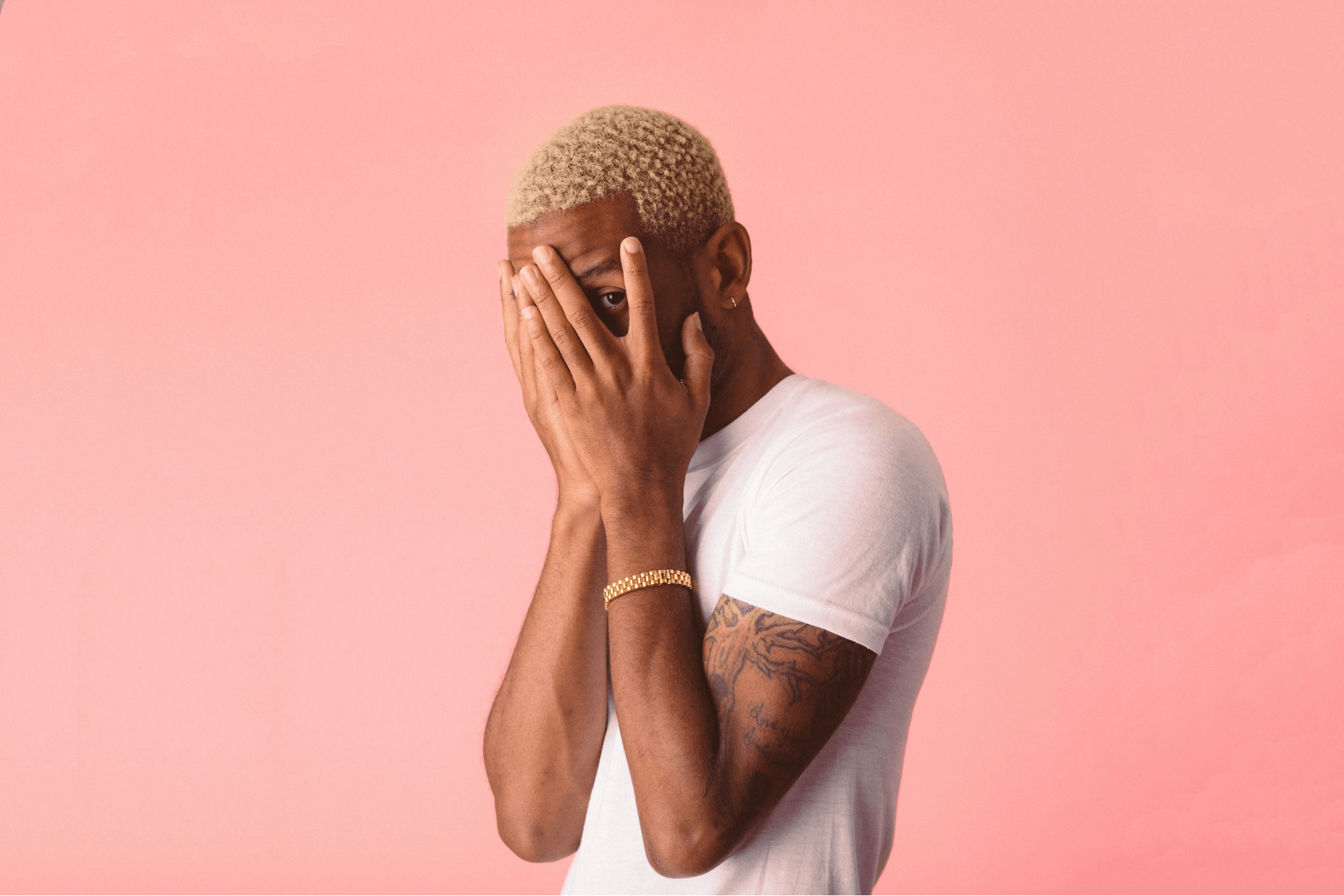 He started his path to fame as a teenager, uploading 6-second funny videos to the Vine platform. He mostly filmed improvisations with his friend Angelo. Their hilarious pranks and refreshing sketches caught public attention and soon, he found that millions of people were watching his content. He even won Best Vine Comedian at the Shorty Awards in 2016.

When Vine closed, Meech shifted to YouTube, Instagram and Twitter. Almost every bit of his content goes viral, is extensively quoted and becomes a meme. He keeps filming short sketches but also has created a personal vlog. Demetrius’s videos are completely free of any attempts to belittle or offend anyone. He has a great ability to notice special things in everyday life, keeping his eyes open to the world around him and putting his humorous twist on it without offending other people.

While being an influencer with an immense following base, he tries to bring a breath of fresh air into our toxic social media world with the support of things that matter. His uploads range from “If Horror Movie Characters Were in a Reality Show” to “It’s Okay to Cry.”

Through his videos, Demetrius appears as a loud and fun-loving guy with an infectious grin. However, in real life, he is quite the opposite: a soft-spoken and shy introvert.

In 2016, Demetrius first openly talked to his subscribers about his fight with depression and his struggle with suicidal intentions. In September of the same year, he released a short film about “a young man’s journey to be reunited with happiness.” This video was shared around the internet and social media extensively. A lot of people publicly confessed they felt the same on a daily basis. So, Meech decided to carry the message forward. “Be Happy” was the first slogan of his “The Golden Life Clothing” aimed at raising awareness about mental health problems. The brand was focused on sporty apparel with slogans and messages. The line included t-shirts, hoodies, jackets, and caps. The “Be Happy” collection was the first to bring awareness to mental health and to promoting self-positivity.

Alongside his hilarious and popular videos, Harmon openly speaks about his suffering from mental illness to his almost one and a half million followers. He often posts videos about overcoming difficult days and shares his tips on how to live a more positive life and how to feel better when you are low. Demetrius declares this is his only message he really wants to go viral.

On November 2017, Demetrius Harmon first released his You Matter hoodie, announcing it in social media. He said he made this for himself, for the boy he was at 15: hopeless, lonely and scared of life. “I made this hoodie so someone reads my shirt and walks away feeling important, feeling like they belong on this earth. I made this hoodie because I care. I made this hoodie for my friends who struggle with depression and break down crying to me because they don’t know how much longer they can keep going, I made this hoodie to start a conversation... and this is just the beginning.” - Harmon wrote on Facebook. The hoodies were originally released in grey, black, tan, red and blue. 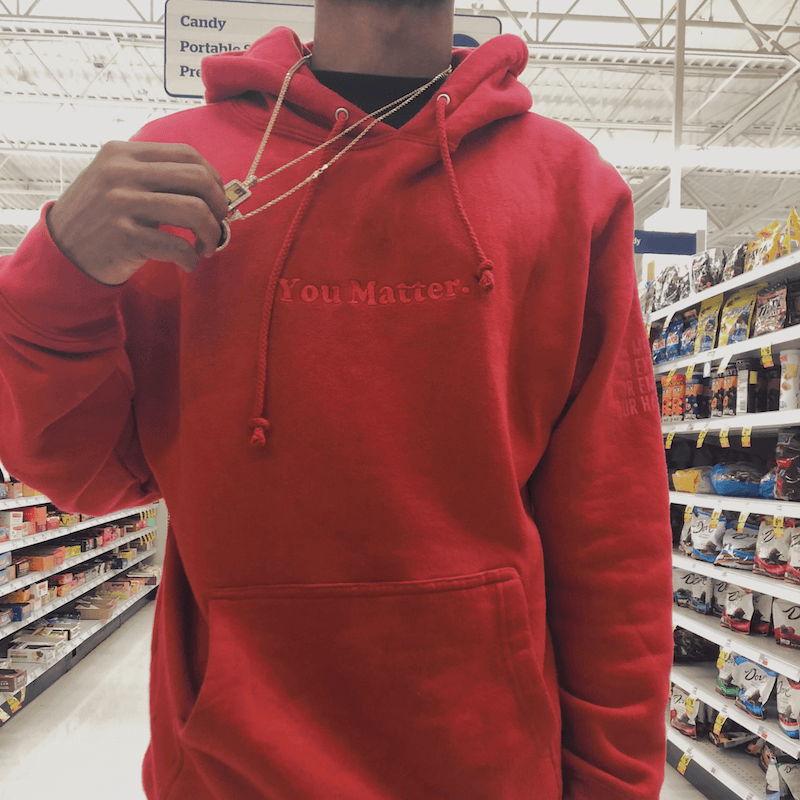 Since then, his hoodies are constantly sold out. However, Demetrius not only sells hoodies, he often gives them for free, like in his other short documentary You Matter. The actor talks to people of various ages, origins, and backgrounds about their experiences with mental illness, their story of feeling low and self-harming. He also talks about himself and burst into tears. The ultimate idea was to let everyone know that they do matter.

Harmon has also given a speech at a high school in his native state Michigan. He shared his lowest moments and the way he overcame them. He was chosen for that speech by students as they find him very motivational. For young people struggling with depression, Harmon is an example that this can happen to anyone, no matter how successful or admirable you are. Aside from giving speeches to teens, Meech hosts meetups with free hugs, donates money for schools, promotes LGBTQ rights and writes beautiful poetry.

In an interview, Demetrius once told how he came up with the brand. He says he was writing down reassuring things that he wanted to hear. “You Matter” was one of the most important of them. Other important things are also written on the sleeves. 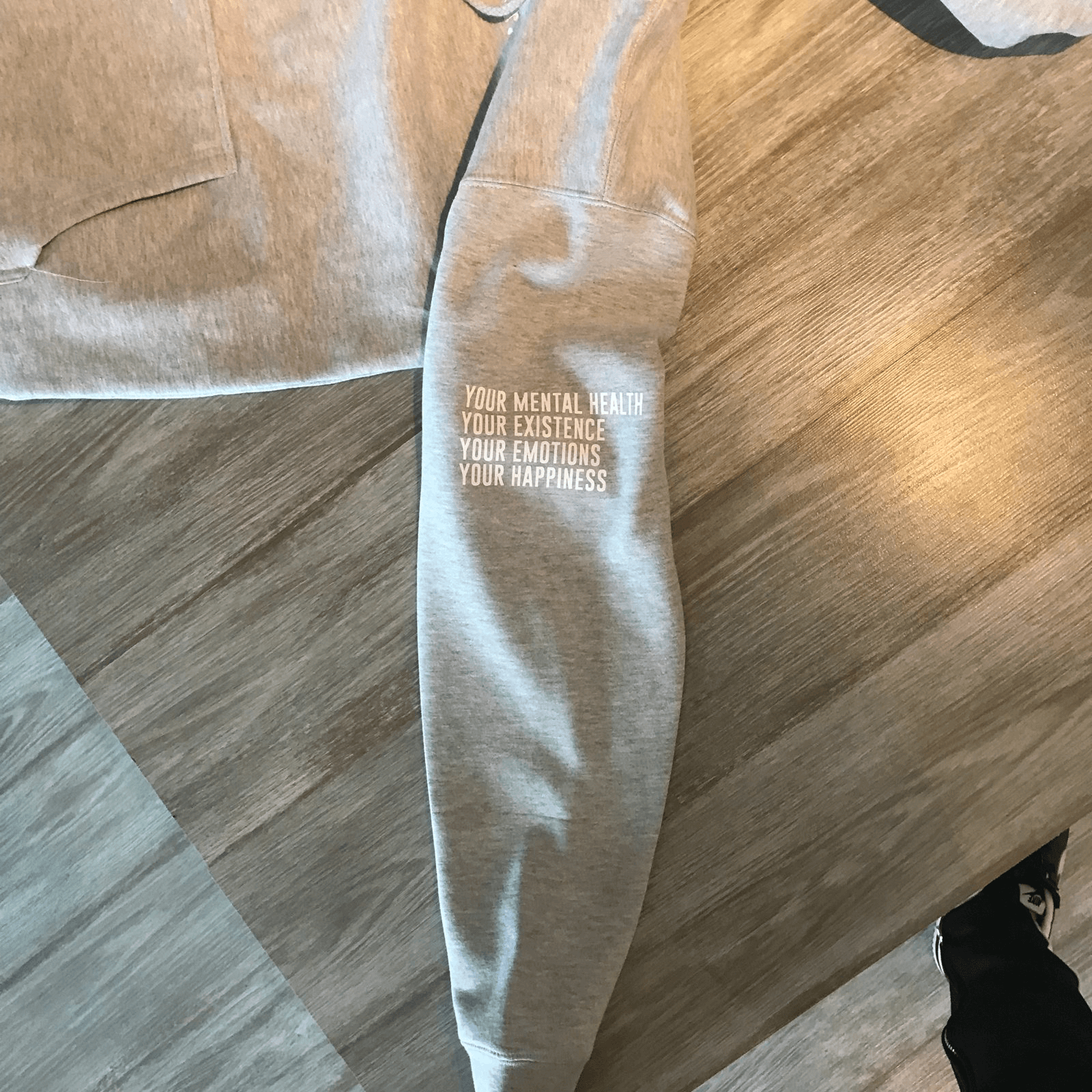 You Matter hoodies are meant to boost self-esteem and make people feel important. From a simple garment item, it became a powerful movement, a physical manifestation of the love and support Demetrius is spreading to his followers on all the platforms. He wants people to read the message on someone’s chest and feel the same way, feel that they matter, they are valuable. “I feel weak but I know I’m strong” embroidered on inner wrists of the hoodies’ sleeves is a reminder that low days will be eventually gone. If you have some support, you can also find strength in yourself and Harmon is willing to give that support.

As for the production process, Harmon says he does everything in-house and pretty much by himself. He personally orders the hoodies, brings them to the printer and picks them up, packs and ships the orders. He admits, it is hard work, which makes the clothing more personal and worthwhile.

Where to buy You Matter Hoodie

Hoodies by Demetrius Harmon are only available through his website. They cost $60 but most of the time, the shop says everything is sold out. From time to time, Meech posts about restocking on his social media accounts. For example, there will be two new colors added in May, which is the Mental Health Awareness Month. To honor it, Harmon will donate a percentage from sales to various mental health organizations.

Meech releases new colors every now and then. In May, You Matter hoodies will become available in green and grey. Baby blue color was also added recently. The hoodies are made of a cotton/polyester blend. Harmon says the fit is normal for men and a little oversized for women. Normal size would look a bit baggy, while those who want it fit should order one size down. It takes three to four weeks to ship the merch since all items are made to order. Moreover, the shop does not do refunds or exchanges.

The hoodies are sold out pretty quickly. One of the first batches of 600 pieces was sold in just 40 seconds. But Harmon says sales are not his main priority. He wants to make the world a better and safer place, to give people hope.

In case you just like the message and want to buy You Matter piece immediately, you can check these black and white hoodies. 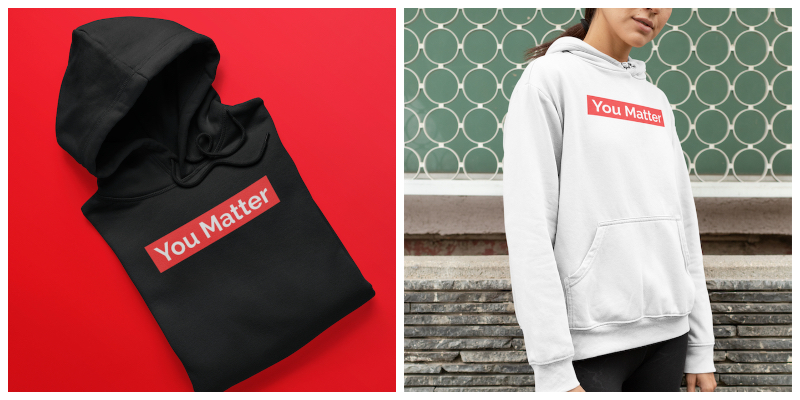 Other Hoodies With a Social Cause

You Matter is not the only brand that tries to speak up about important things. Since a hoodie is a great canvas to print or embroider while being a well-liked garment, it is a very convenient medium to put the message on. For example, in 2016, Topshop had a very successful campaign Lady Garden, created to raise awareness about gynaecological cancers. It was extensively backed by top celebrities like Cara Delevingne, Liz Hurley and Natalia Imbruglia.

Sometimes you can buy used hoodies by Meech on sites like depop or grailed, though it does not seem that many people want to sell there You Matter clothing. However, there exist other no-name brand hoodies on Amazon and AliExpress that carries the same slogan in different fonts. These are just not the same. 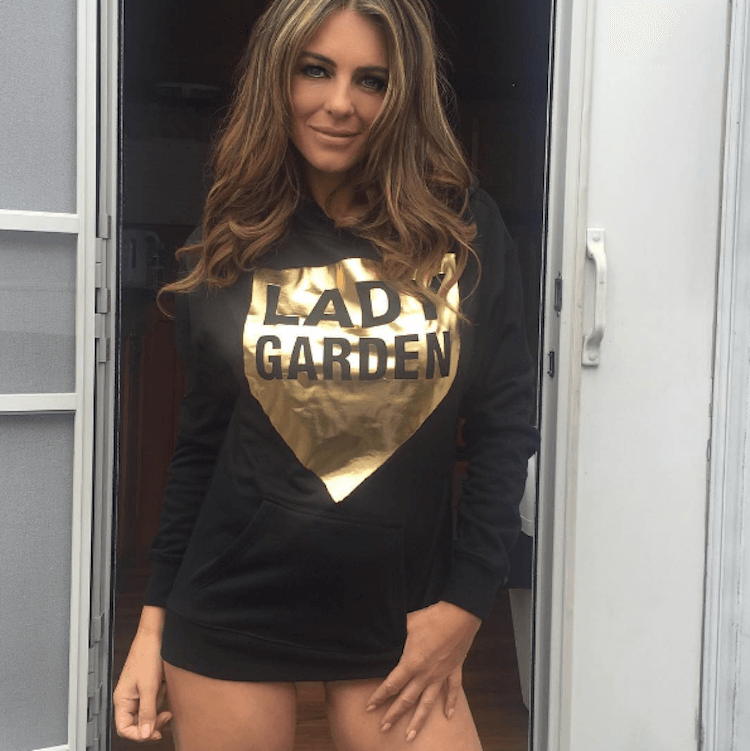 The death of Trayvon Martin, a black teenager shot by a neighborhood watch, also pumped the wave of hoodies with a message in 2012. The hoodie itself has become a political statement, a symbol of racial profiling and discrimination. Five years later, activist Michaela Angela Davis and actor Gbenga Akinnagbe created a hoodie campaign #OurSonTrayvon to make sure people remember the tragedy and its cause. A percentage of sales was donated to the Trayvon Martin foundation, committed to ending gun violence. 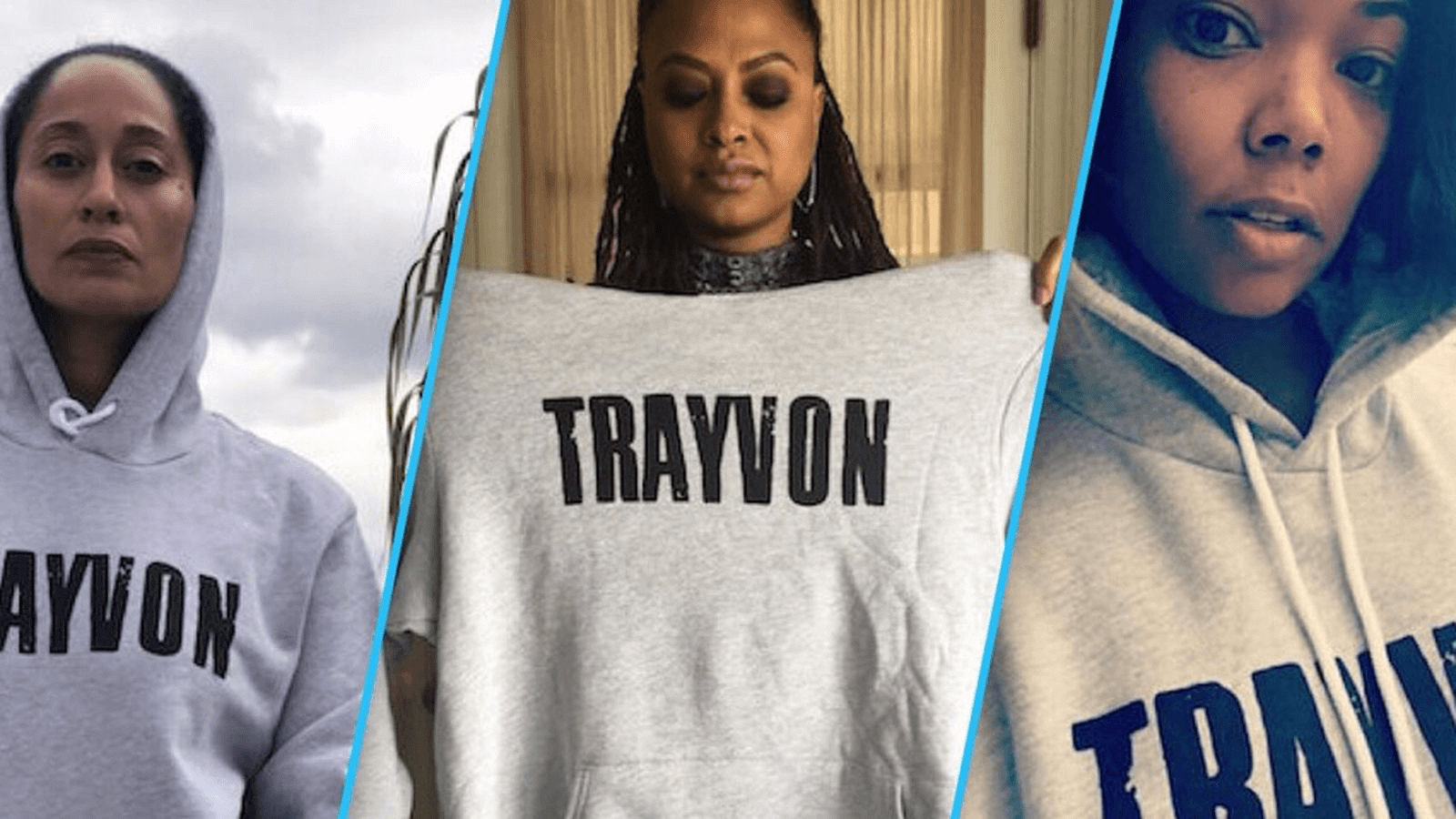 Los Angeles brand Madhappy says they sell optimism in the form of a hoodie. They also support conversations about mental health, reassuring their community that life is about ups, downs and everything in between.

Whether you encounter the same problem as Demetrius Harmon or not, the You Matter hoodie is a message to everyone. Every person has the right to live life to its fullest, to express his or her feelings, to feel weak and to receive support.