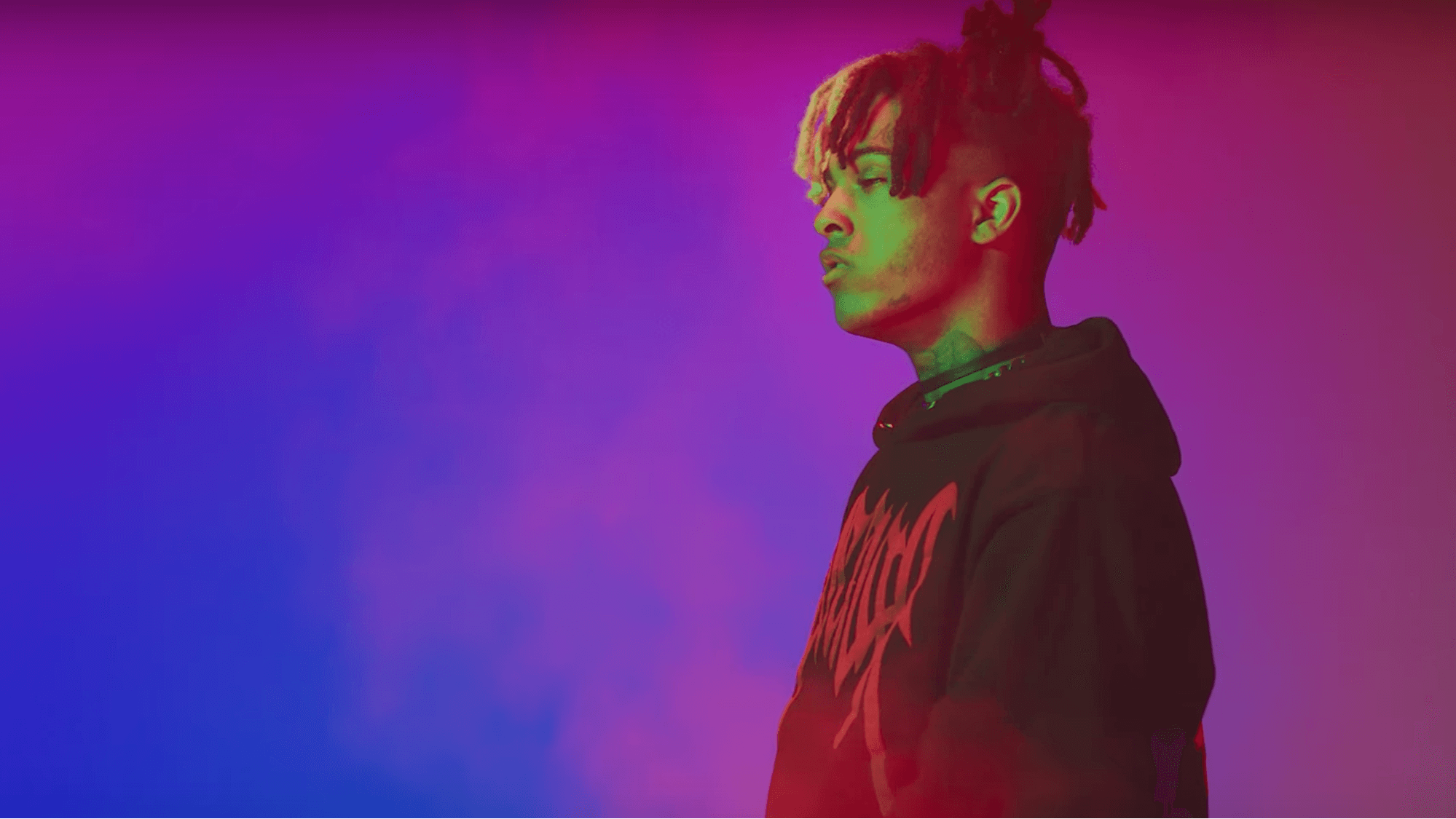 Rapper XXXTentacion was quite a controversial person. At age 20, he had millions of fans, songs on top of international charts and a list of criminal charges for violence. Things that he has created in terms of music and style have become iconic in hip-hop culture. A hoodie from his collaboration with Revenge brand is one of them. This piece of clothing is now desired by many, extremely scarce and extensively faked. Let’s see what this craze is all about. This story about XXXTentacion Revenge Hoodie.

There is not so much inside information about the Revenge brand. We know it first appeared on Instagram on May 27th, 2016. A picture of a man with his face covered, wearing a t-shirt with «revenge» text, is geotagged as Start. The brand is based in Los Angeles, though there is no brick-and-mortar store you can walk in. Everything is sold online and through pop-ups. The owner is Garette, a very secretive man in his early 20s, who never shows his face. From time to time, there are live streams on the brand’s Instagram to announce upcoming drops, to show the warehouse or to answer questions and suggestions.

The brand’s name is said to come from Garette wanting to get revenge on those who treated him badly. For him, the success of the brand is the revenge.

Later in 2016, or in early 2017, Garrette met rapper XXXTentacion. It’s unclear who initiated the meeting, but most probably they were acquainted through Instagram DMs. Anyway, Garette was the real beneficiary. After X showed his support to the brand, the popularity of Revenge skyrocketed.
At that time, XXXTentacion (friends called him by his real name, Jahseh) was gaining popularity on Soundcloud. His violent track Look At Me! was a huge online success. X was part of a new wave of artists, whose music incarnated a disconnect with social norms. 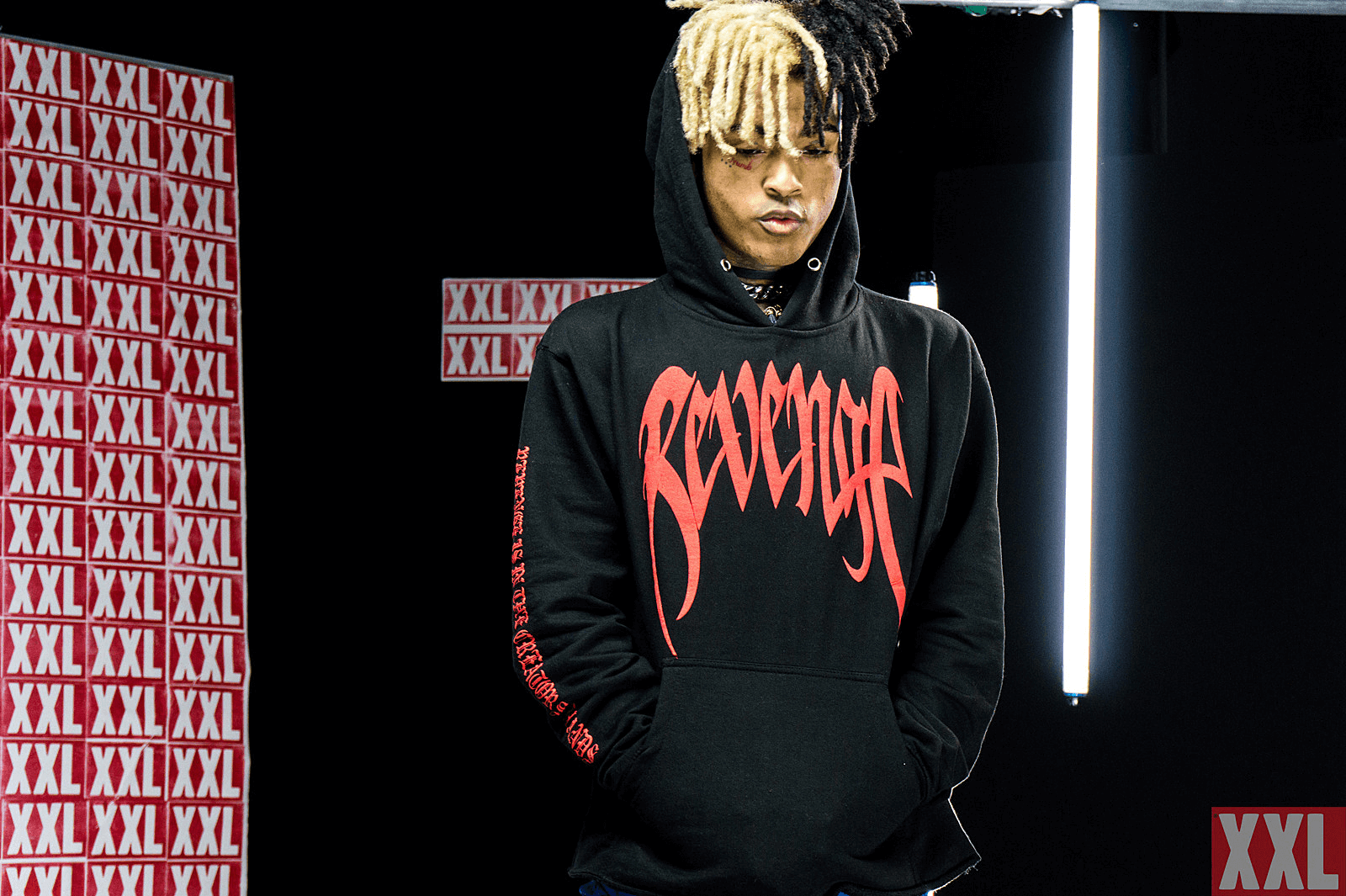 XXXTentacion in the most popular Revenge Kill Hoodie

The collaboration between XXXTentacion and Revenge brand brought us things like the Kill hoodie. They also made popular their own style of hoodies with a cropped bottom and no drawstring. Not only did X wear Revenge clothes, but his fellows from Members Only hip-hop crew and other Soundcloud rappers also appeared in them in public. This helped the brand get their feet off the ground and start to make a name for themselves.

In May 2017, X released a song called “Garrett’s Revenge.” The title was later changed to just “Revenge.” The artwork for the single was allegedly Garrett’s suicide note. Though later, it became clear that it was the rapper’s close friend Jocelyn who died. The single was followed with a mixtape album with the same name. Its artwork displays the revenge lightning logo. 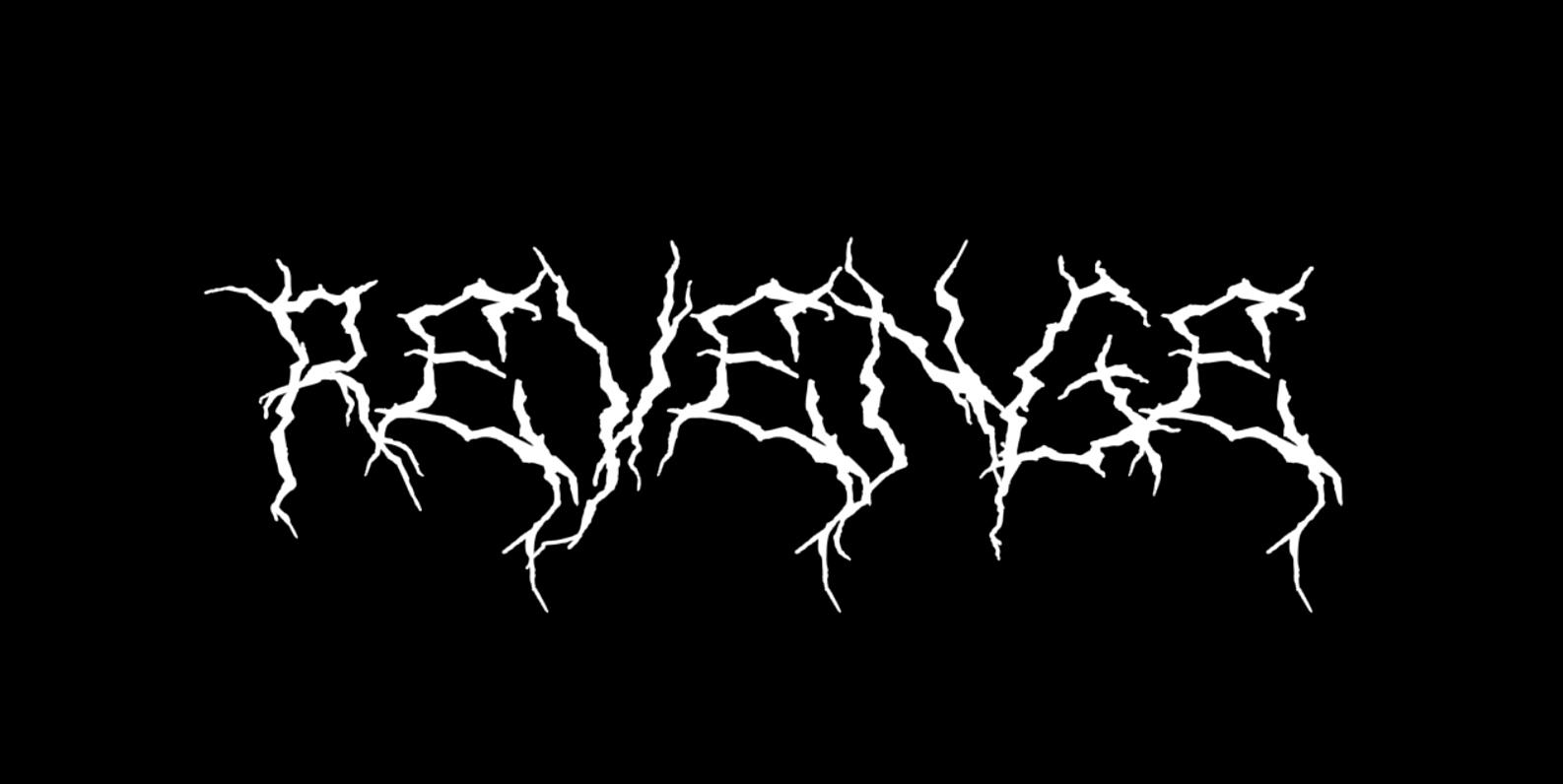 A fragment of the cover art for Revenge by XXXTentacion

XXXTentacion went on the Revenge Tour, which generated a lot of media coverage, mainly because of the aggressive accidents on the stage or in the fan zone. This was the time when the Kill hoodies and other iconic pieces were available on the Revenge website for several months during the tour.

In June 2017, an artist nicknamed Wehadnoidea, who published fan art of XXXTentacion, accused the Revenge team of stealing his art, putting it on a hoodie and not giving him any credit or compensation. He said the hoodie was sold out on the site the same day it was released. The artist wrote, “When I reached out to the brand Revenge, they asked me, ‘Why you tripping?’ and when I reached out to XXX, he kindly asked how I would like to be compensated. But then I was ghosted.” Revenge allegedly deleted the Instagram post with this hoodie. It can not be found on the official website as well. The story went public and sparked a lot of controversy around the brand.

In October that year, Garette made a post calling for designers to submit samples of their graphic art for the brand. This is when Stephen comes in. Garette liked his work and hired him full-time at the end of the month. Stephen still works for Revenge and is probably the only known face in the company. He lives in Kansas, and according to public sources, he has never met Garette in person.

On November 1, X released a video saying he no longer supports Revenge. He says, “I no longer support Revenge clothing brand at all,” adding that he is upset and heartbroken. “You can not trust anyone in the industry.” There are a lot of speculations as to why he stopped working with the brand. Some people say he felt replaced by one of the creatives after Stephen was hired. Others say that he was angered with the stolen fan art. Anyway, X clearly did not want to be associated with the Revenge brand anymore.

With the beginning of 2018, things started to cool down. Revenge made new collaborations with rappers Ski Mask the Slump God and Juice WRLD surrounding their albums. These clothes never reached the same popularity as XXX hoodies, but they still sold out. The brand started to experiment. They swapped hoodies with boxy tees (this was widely criticized by fans). During this time, they also expanded onto new silhouettes like denim jackets. They had two sets of 100 blue denim with the white graphic on the back and 100 black denim with the red graphic. Drop after drop, the clothing stock was selling out quickly. More and more designs seemed to be coming out every couple of months, but then on June 18th, XXXTentacion was killed.

The death of the famous rapper led to a huge spike of interest in Revenge, especially in their early drops. Some people were selling X collaborations for crazy amounts of money; others were happy to pay, no matter the cost.

July 9, 2018, Revenge release their first mini collection since X’s death. The entire drop was sold out within ten minutes. Revenge had become one of the most hyped clothing brands, shining on the front page of all street style websites and releasing new unique clothing pieces every month. The size of the drops were intentionally scarce, and they never restock.

Where You Can Buy a XXXTentacion Revenge Hoodie

Revenge sells their clothes in drops, which are mini-collections of a limited number of pieces. The date of the drop is announced on Instagram, and then the clothes appear in the webshop. This hoodies are still great quality and design, costing up to 100 dollars, but they have nothing to do with XXXTentacion.

The original X hoodies are now broadly traded on the secondary market, on websites like Grailed and Depop. The authentic pieces are quite expensive and often used. The prices vary from 150 to 500 dollars or more. 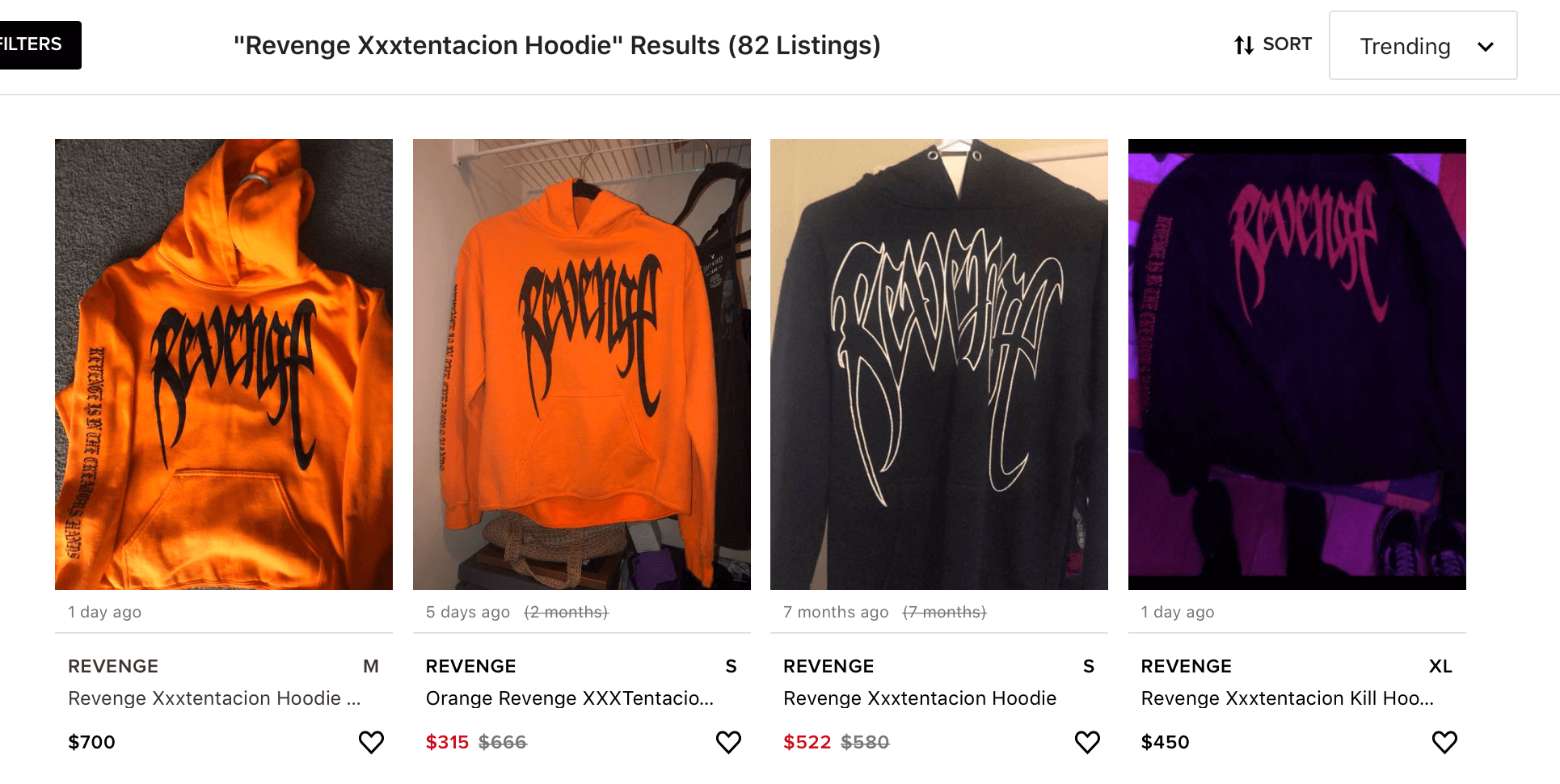 Of course, such popular pieces of apparel are widely faked, and there are tons of “inspired by” hoodies on Etsy, Ebay, Amazon, and Aliexpress. They are usually cheaper by about 20 bucks.

However, even when buying an expensive piece, make sure you are not buying a fake. The Reddit community gives some advice on how to tell one from another.

The Most Popular Models of XXXTentacion Revenge Hoodie

The most popular Revenge piece of clothing is the one created with XXXTentacion called the Kill hoodie, especially the orange and the red-on-black ones. However, this model also exists in other colors. 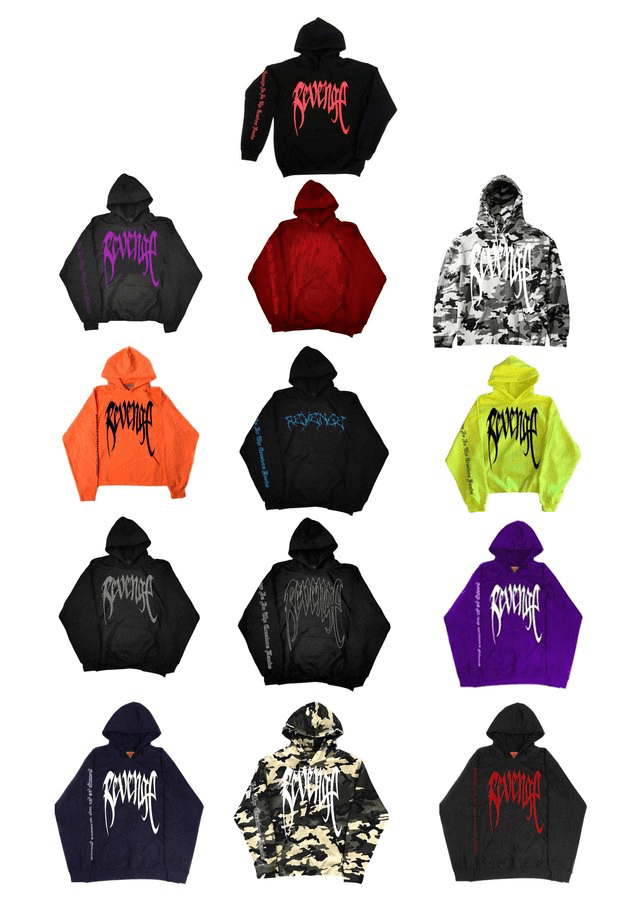 Most of these hoodies have a so-called killhand on the back.

Where to Get the news about XXXTentacion Revenge Hoodies

If you want to know about new Revenge drops, follow the brand and it’s designer on Instagram. Most news is posted and live-streamed there. You can also check the Revenge_cult fan account where they discuss new items and drops.
Also, there is a wide community on Reddit devoted to XXXTentacion, discussing his collaboration with Revenge as well.

The information about the Revenge brand timeline is pretty scarce. This is the story of collaboration between music and style and the tragedy of failed relationships, both business and personal. Revenge managed to build their own rap fanbase even before XXXTentacion stopped supporting them. But after the death of the famous rebellious rapper, these clothes become even more desirable.