Virginity Rocks Hoodie – Why did it become an Internet joke?

Virginity Rocks is a chastity movement. It has been around since the 90s and managed to become a cliché phrase.

The phrase “Virginity Rocks” is most often found on branded T-shirts issued by Christian organizations. In an era of decline in moral values, the church tries to save young people by promoting abstinence. The current is really gaining momentum. They talk about it. Young people who support the idea proudly put it on merch. And it also appeals to admirers of irony and opponents of imposed piety.

In 2008, teenagers began to wear T-shirts “Virginity Rocks” not only to maintain but also to make fun of ideas. As they say, if you can’t defeat the enemy - join. The silent leader of this movement was Danny Duncan. In 2018, the video blogger began producing clothes labeled Virginity Rocks. In particular, hoodies.

How Did the "Virginity Rocks" Move Appear?

The development of the abstinence program began in the early 80s under Reagan. It happened with the support of the church and the state. However, the active implementation of the program and its generous funding was provided by the George W. Bush administration.
Compulsory Virginity Rules classes have appeared in schools. They are also known as the "Rules of Virginity" or "Virginity rules." There were other names, but it was the first that gained the greatest popularity.

In the classroom, teenagers were told about the danger of early “development of relationships” and the benefits of “moral” life. At the same time, only church-approved information was used. Therefore, no one spoke about contraceptives. As a result, one in six teenagers made the decision to “wait” before marriage.

However, in today's school Virginity Rocks hoodies have caused scandals. A teen was even thretened to be suspended if he wear it again.

What Is Wrong with the Virginity Rocks Movement and Why Didn’t They Love It?

If you look at the idea superficially, then everything looks fine. The church is trying to counter the ubiquitous sex propaganda, seeking to preserve the institution of the family and the chastity of young parishioners. Those who share the idea join it. However, it is not realized by a single occupation.

Activists and supporters also use chastity rings and balls of Integrity.

The Silver Ring Thing program is run by activists. To attract modern youth, they organize various festivals and concerts. But the style of music does not play a key role. The main action of the evening is the presentation of rings that symbolize pristine purity.

The peak of instruction on the “true path” is the Balls of Integrity. They are held annually in almost every state. They represent a real ceremony, which is held for 60 or 70 families. Includes a common prayer of fathers and daughters, dinner, a solemn speech, performances of girls and the ritual of the "sacrament of integrity."

Unlike previous events to popularize the “moral” lifestyle, this does not imply a vow of abstinence. Moreover, girls make no promises at all. Fathers do it. They vouch for their "princesses" and commit to protecting the purity of their body and soul. The father also promises to protect his daughter, to admonish, guide and pray for her, while remaining an example.

One of the key points of the ceremony is prayer together. It is about the gift of purity of mind, body, and soul to future generations. There are some guidelines for fathers regarding behavior on this gala evening. For example, it is advised to celebrate attractiveness by making compliments. Indeed, in everyday life the girl may miss these words a lot. In response, words are heard about daughter's love. This is followed by the signing of a bilateral “cleanliness agreement”. Next to the large wooden cross lay white roses, as a symbol of innocence. After - dancing.

The Ball of Integrity is the pursuit of all-round purity. However, the opponents of the event have reasons for indignation:

Many liberals find the Chastity Movement only a relic of the patriarchy, unable to bring real benefits. The Forbidden fruit is sweet. Perhaps this can explain the statistics on the fate of the participants of such balls.

T-shirts with the inscription: “Virginity drives” have been handed out to teenagers since the 2000s. Christian organizations did this. However, in May 2008, CBS wrote on the Internet about the statement of many students from one school district in Virginia. They were told that they were not allowed to wear Virginity Rocks t-shirts at the school.

On November 21, merch was mentioned on the Chronicle forum, asking, “Dude, could it be an ironic T-shirt?” In 2011 (August 4), Justin Lawrence Hoyt posted another comedy video on his channel. In it, the video blogger was wearing a Virginity Rocks shirt. Over eight years, the video has collected over 2,900 views. A similar situation with the Virginia school district repeated on September 17, 2014. Only now has this happened in Arkansas. CNN reported that one of the school districts is considering a ban on sexually-related merchants.

The Virgin Diaries or How Virginity Rocks Became a Meme

In 2017 (July 8), an episode of “The Virgin’s Diaries” appeared on the TLC UK channel page on YouTube. It was called "Fun, loneliness and willingness to communicate." The protagonist of the episode was a guy named Skippy, dressed in a T-shirt “Virginity steers.” But solely for sincere reasons.

The video has collected more than 2 million views and 16 thousand likes.

On August 11, a macro of one of the episodes from Skippy was published on the Reddit website, supplemented by a signature. And he was attributed to the category of memes about depression. Since then, users have managed to forward this Skippy image hundreds of thousands of times.

A Youtube celebrity Danny Duncan is the one who has lightened the spark this time. In 2018, he released a commercial using the catchphrase “Virginity drives.”

On May 19, he uploaded the video “Virginity drives the news!”. Video about Danny's trip to Roseburg, Oregon. One high school student was told that you should not wear a Virginity Rocks T-shirt, and the video blogger decided to pay a visit.

Danny Duncan's name also surfaced on the Urban Dictionary website. On August 1, the phrase “Virginity rules” was defined as the motto of Danny Duncan, which is used to encourage viewers to be virgins. He has only one exception - deprivation of virginity of other people. Over the year, the determination gained more than 200 votes.

Today Danny's Virginity Rocks merch is all over the market, stocked even in major retail chains and malls across the US. The trend confuses people and puzzle school administrations. Yet, teens love to wear it.

Want to stand out from the crowd? Emphasize your own personality and audacity? In that case, the Virginity Rocks hoodie is exactly what you need!

Below we have compiled a selection of original releases with this print. Among them, you will certainly find the perfect option for yourself.

Black hoodie with contrast embroidery made with 100% cotton. It is a universal model for every day. Goes well with clothes of any color. Price: $50. 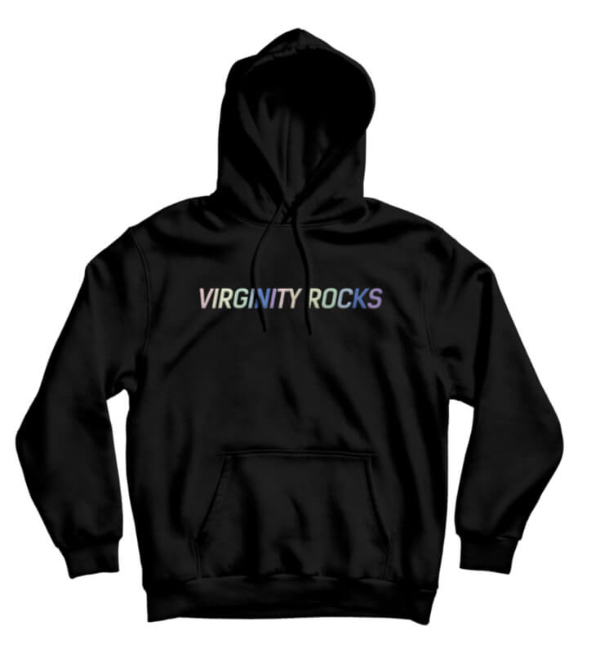 Hoody pink with a cult print that will not leave you unnoticed in the streets. Make your look even more original and exciting with the cool Virginity Rocks clothing. The hoodie is 100% cotton, with ribbed cuffs and waistband. 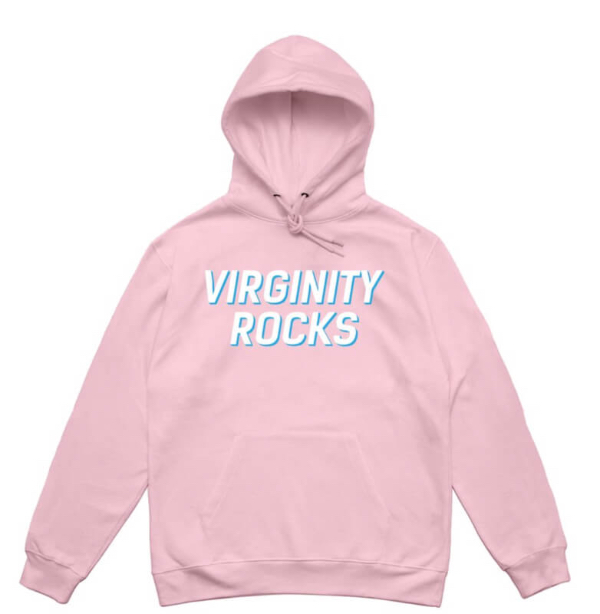 A long sleeve t-shirt in pastel blue is another great option to stand out. Let the world know you rock the trendy meme. The sweatshirt has regular fit and tagless neckline for extra comfort. The design is screen-printed across the chest on cotton fabric. Price: $35 USD. 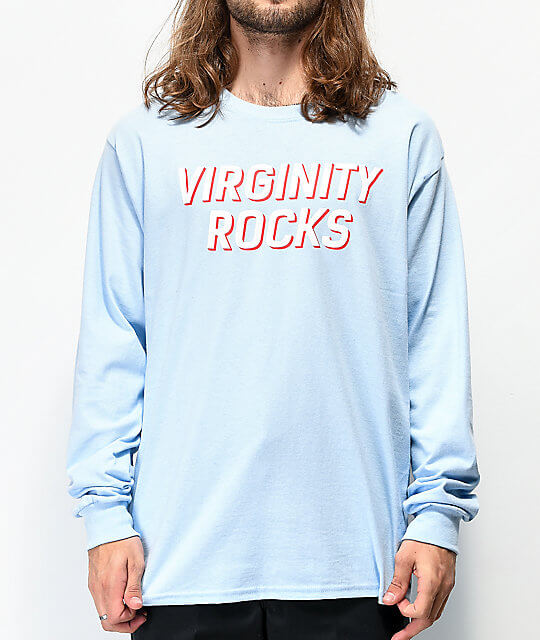 Burgundy hoodies for those who prefer extraordinary things. Perfectly complements informal bows, bringing them a touch of rebellion. This piece is perfect for chill weather since it has a soft fleece-lined interior. The hoodie also features adjustable drawstrings and a kangaroo pocket. Made with 80/20 cotton/polyester blend. The price is $55. 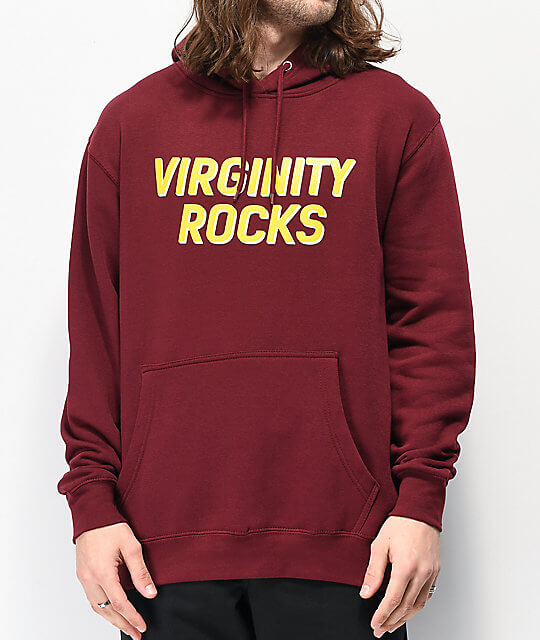 A simple yet stylish grey sweatshirt with blue words on it. It makes a great outfit for sport as well as for Netflix and chill (and nothing more) with the dearest friend. It is made tagless so that nothing can irritate your neck. Can be yours for just $30 USD. 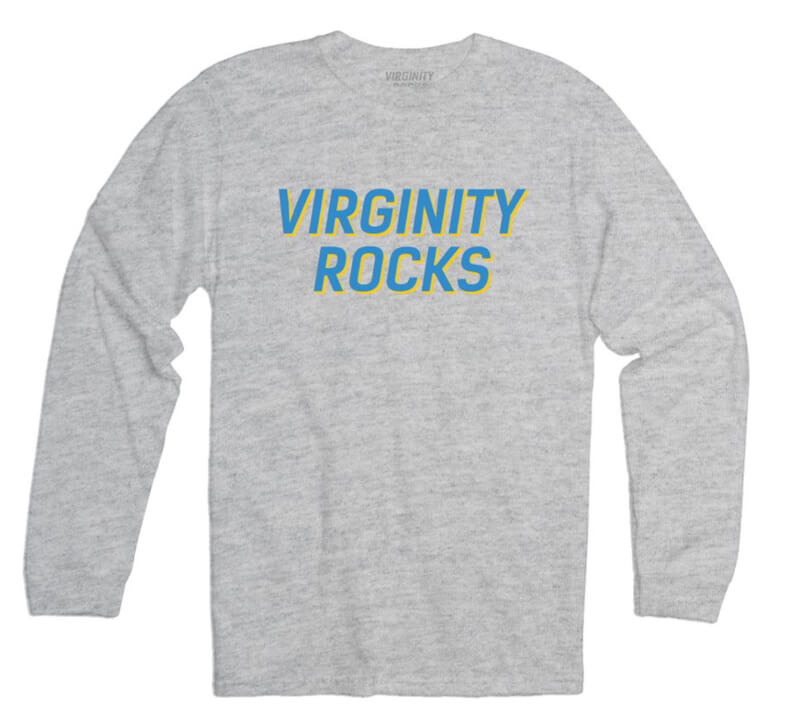 This seller uses a different font to write the same moto. You can wear it to put your and your significant other's parents at ease. The hoodie is made with 50% cotton and 50% polyester and offers a classic fit for fun and relaxing pastime. It is being sold on Etsy for $30 USD. 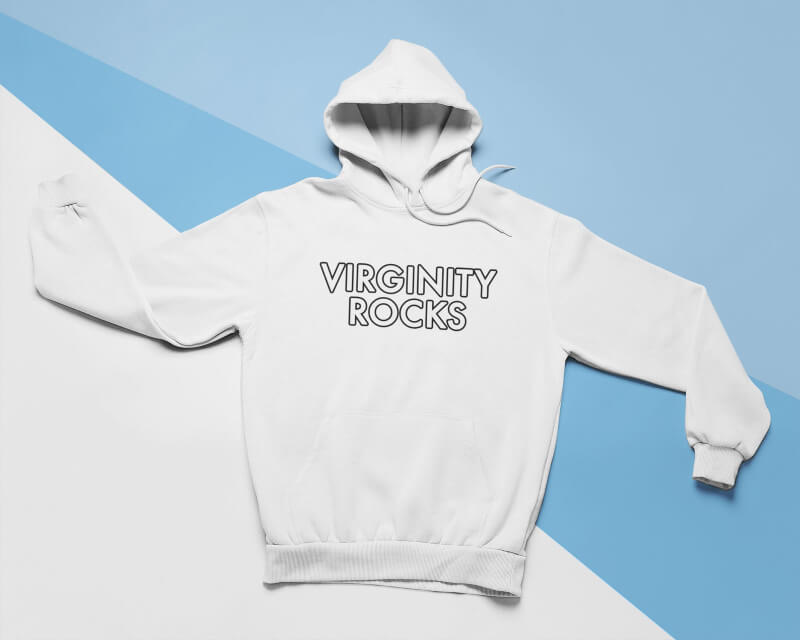 This vivid pullover features a slightly different design with lips inside "Rocks". It also has an oversized fit, a front kangaroo pocket, and matching drawstrings. A hoodie in this color looks incredibly stylish, so do not hesitate to wear it to parties and nights out. The fabric is 100% cotton and the price — $30 USD. 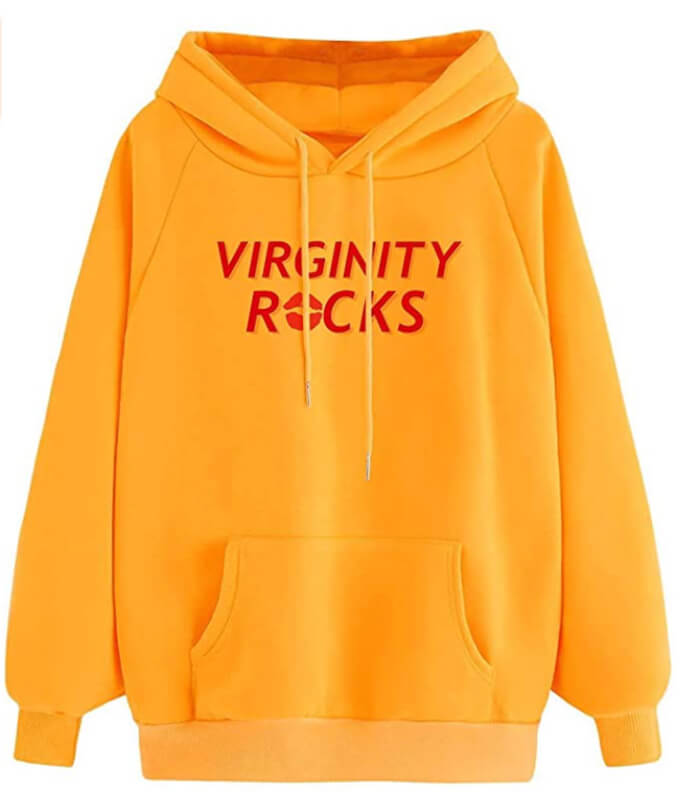 The trend for Virginity Rocks hoodies is controversial yet undeniably youthful. Some are wearing them as a mockery, others support the message sincerely. In any case, they are a way to express yourself. We hope this collection has lifted your mood and was useful to you.