Since the surge in music merchandise in 2016, the growth is not going to stop. In 2019 we’ve seen a steady rise in sales of licensed and promotional products: from Netflix fandom t-shirts to political campaign caps and magazine tote bags. Museums, media businesses, and fast-food chains are trying to keep up with hip-hop and K-pop stars. The merch craze is evolving, tapping into more industries and getting more customized.

ChampionHoodie blog offers our take on recent figures, some of the merchandise business's biggest goings-on.

Current State of the Merch Market

Numbers first: the most recent stats from Licensing International shows that the market of merch is in rude health. Global retail sales of licensed merchandise and services amounted to $280.3 bn in 2018, 3.2 percent more from the previous year. Royalty revenue from them reached almost $15 bn, leaping by 4 percent. The US and Canada make up the biggest market with over 58% share, while Latin America and Asia show the biggest growth - over 5 percent per year. As for the expectations for closing 2019, 44 percent of surveyed market professionals expect their licensing-related business to increase by 7% or more. About 19% of their less optimistic colleagues predict 4-6% growth.

Apparel, toys, and fashion accessories were the biggest product categories, according to Licencing International survey; they account for a combined 40% of the market.

Entertainment is the biggest industry category, making up almost 44% of the market. This is because fandom communities use merch to create a connection with their favorite artist or character. For celebrities and producers, merch provides advertising and additional income. The global music merchandise market was worth $3.5 bn in 2018, over a billion more than the year before. Thanks to streaming services and online downloads, selling promotional products became one of the major revenue generators in show business.

The event commerce platform AtVentu reported that its average gross merchandise sales per event increased by 29% in the first half of 2019. The company reports that average sales within the industry are now $5.50 per show visitor. This is 11 percent more than in 2018. Top-selling celebrities take more, of course; Taylor Swift, for example, makes $17 per ticket on merchandise sales. Overall, the highest paying audience attends K-pop, pop, and hard rock concerts. For example, a thrash metal group, Slayer, reported selling over $10 million worth of merchandise during their farewell tour. Touring artists earn between 10-35% of their revenue through merch sales, while the very biggest names bring in $300-400k during one show. 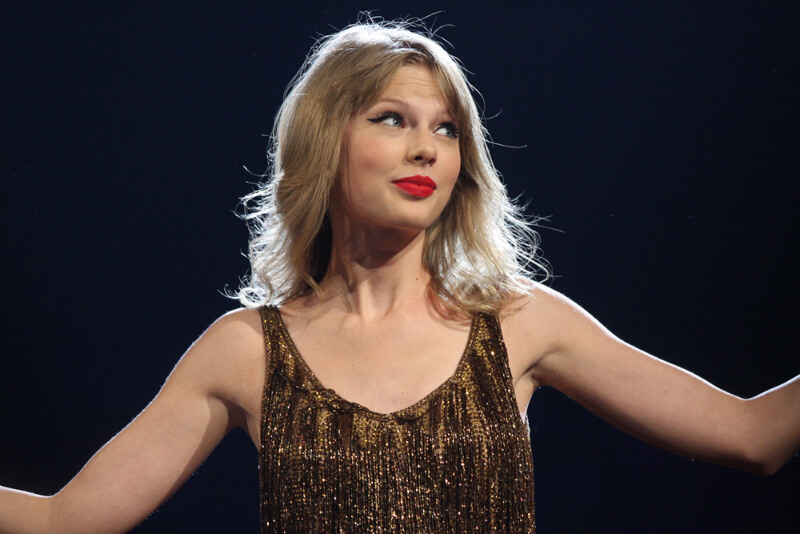 On average, artists sell $5.50 of merch per visitor during a show. Taylor Swift makes it $17. Photo: Flickr

The top-selling item is predictably a black T-shirt; the average price has increased by $2. An average concert tee now costs $32.

Merch is enjoying its moment in the fashion spotlight and is more ubiquitous than ever. It feels like everyone and their mom is either wearing some kind of "merch as fashion" or making it themselves.

So, what will be the next wave of merch trends in 2020? We have some ideas. While some of them have already been popping up, we predict to see even more of these merch releases in the coming year.

The business of merchandise becomes increasingly lucrative for major showbiz companies. The world's most influential licensor, The Walt Disney Company, reported $54.7 bn retail sales of merchandise in 2018 - an impressive 1.7 bn increase from the previous year. Universal Music Group reported that its merchandising revenue increased from $130 million to $228 million through the first half of 2019. Over the year, the company bought European merch-maker EMP for over $190 m and LA-based company Epic Right.  Its rival, Sony Music, acquired the merch division of the Araca Group in August and UK-based merch company Kontraband in September. Major labels are splashing the cash to secure their positions and this trend doesn’t seem like it will lessen any time soon. 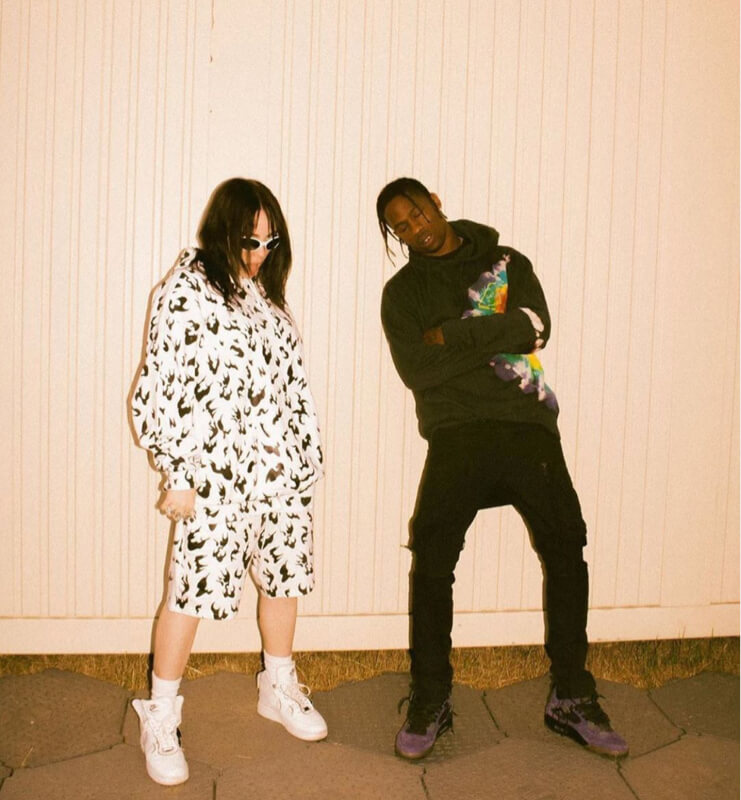 Surprisingly for current Internet-dependent times, 79 percent of global merchandise sales came from brick-and-mortar stores in 2018 while only 21 percent were made online. Those are the same average percentages reported in the prior two years. However, recent events make us think that this is slowly going to change - at least in the niche of celebrity merch.

In August 2019, celebrity merch marketplace Represent bought concert merch platform Sidestep. It is a service where fans can pre-order tour apparel before the show and pick it up before the performance starts. In October, YouTube announced its collaboration with Merchbar to help artists and influencers sell their merch right under their videos. The new feature will make it easier for fans to buy merch online.

We also noticed how entertainment companies are increasingly turning to print-on-demand services like Merch by Amazon. Instead of working with wholesalers to get apparel in stores, brands create listings in their web-shop. T-shirts and hoodies are printed only after an order. So no more deadstock for niche characters.

Concert merch is having its fashion renaissance. In the past, it was fine to just slap the album artwork on a t-shirt. This is not the case anymore for first-tier celebrities. They collaborate with luxury designers or become visual artists themselves, do limited drops, sell in pop-up stores, and showcase the tees and hoodies at shows. Brand and celebrity merchandise has become a form of street fashion.

Kanye West is probably the most shining example. He brought his newest Jesus is King collection for the Sunday Service outside the Coachella festival - and the lines to check it out were several hundred people long despite the early hours. The prices were impressive as well: $50 for a pair of socks and $225 for a sweatshirt. We’ve also seen Ariana Grande making her NASA-inspired merch available for a limited time only, Billie Eilish collaborating with Takashi Murakami, and Travis Scott’s capsule with Dover Street Market available via raffle. The scarcity principle has never worked better; we will probably witness more exclusive and limited drops in 2020. 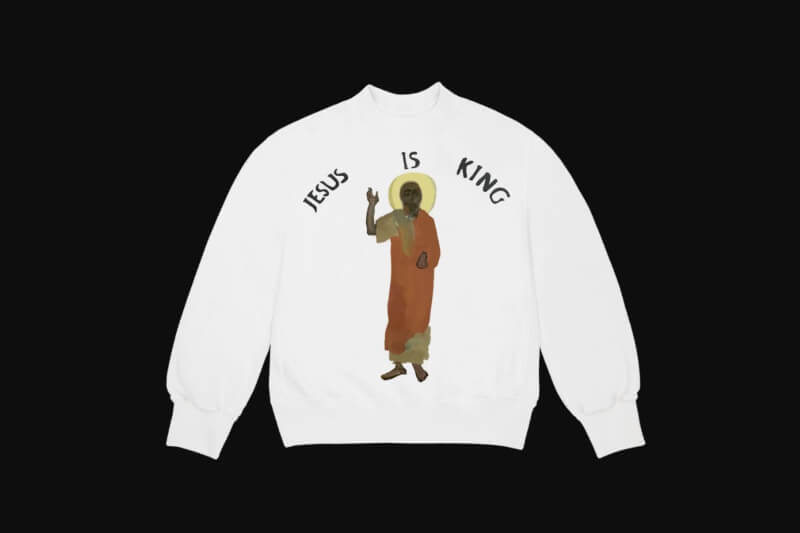 Sustainability is the worldwide trend in fashion and celebrity merch is likely to follow it through 2020. Taylor Swift teamed up with designer Stella McCartney to create a line of eco-friendly fashion for Swift’s album Lover. The material used is mostly organic cotton. Fun fact: the collection also features a faux-leather handbag (worth $795) made from recycled polyester and vegetable waste oils. 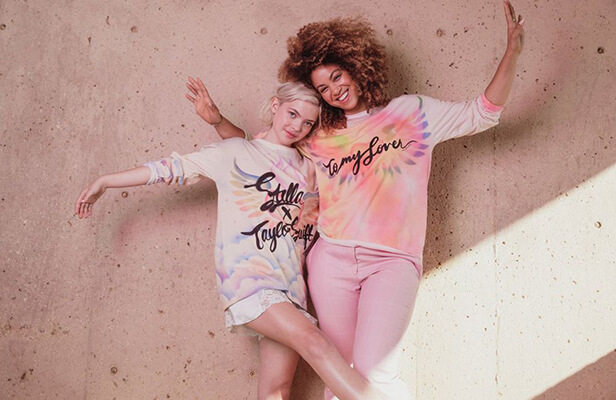 In another sign of the trend, streetwear brand Public School won a $100,000 grant for its sustainability project. The company aims to transform the merch shirt from being disposable fashion into a garment with value. It involves ethically creating basics such as T-shirts and sweatshirts. The t-shirts and sweatshirts will be made with 60 percent recycled cotton and 40 percent organic cotton.

Mashups are made by combining two fictional worlds or characters. Fans have been doing it for ages, adding the newest memes into iconic images. Now, merch companies are taking the trend into newer heights. Take the Major League Baseball collaboration with Stranger Things or Games of Thrones, for example. The figurines are able to catch the attention of both baseball and series super-fans, combining the audiences; seamless crossover merch can draw fans from one property into another. It provides a refreshed look and unites two groups of extremely passionate fans in a desire to buy one t-shirt. The demand for this kind of merch is growing and creative possibilities are endless. 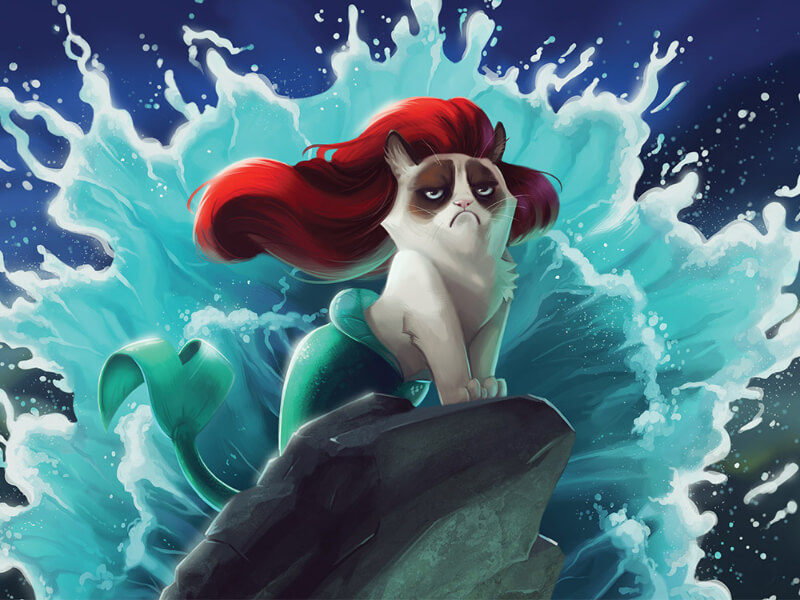 It’s no secret that t-shirts and mags with slogans can bring in serious cash for a candidate: Obama’s office reported that merch brought $40 million to the campaign fund in 2012. In 2018, they accounted for about 30 percent of the Trump campaign’s contributions. The US presidential elections are due on November 3, 2020, which means we’ll see not only tough debates but also bold campaign fundraising merchandise. In fact, it’s already here: Democrat party rules require candidates to secure at least 130,000 unique donations to qualify for the next debate – and buying merch qualifies as a campaign contribution.

Wearing campaign merch is quite a statement,  but candidates make them even more eloquent by using them as a medium to comment on hot issues. Take Beto O’Rourke, who is selling a T-shirt to condemn gun violence in America. It has a profane phrase repeated six times. 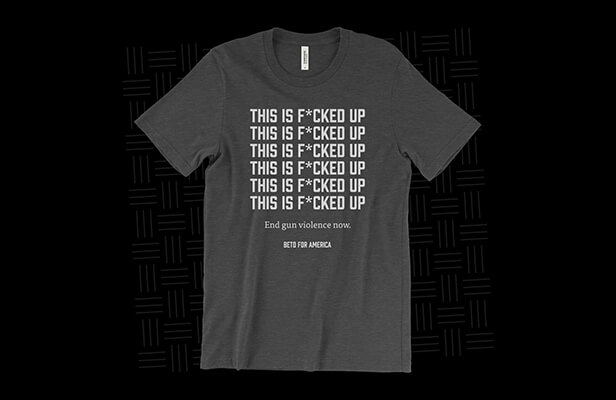 In 2020 we’ll definitely see more attempts to engage with votes in any way possible. Some of it will probably be tasteless.

Beto is not the only one who uses the momentum of a current viral topic. In terms of the promotional industry, it is called “moment merch”. The development of print-on-demands platforms and services made it possible to create and ship products in a span of hours; we saw Kylie Jenner being quick enough to commercialize her “Rise and Shine” song. Her hoodies cost 65 bucks. 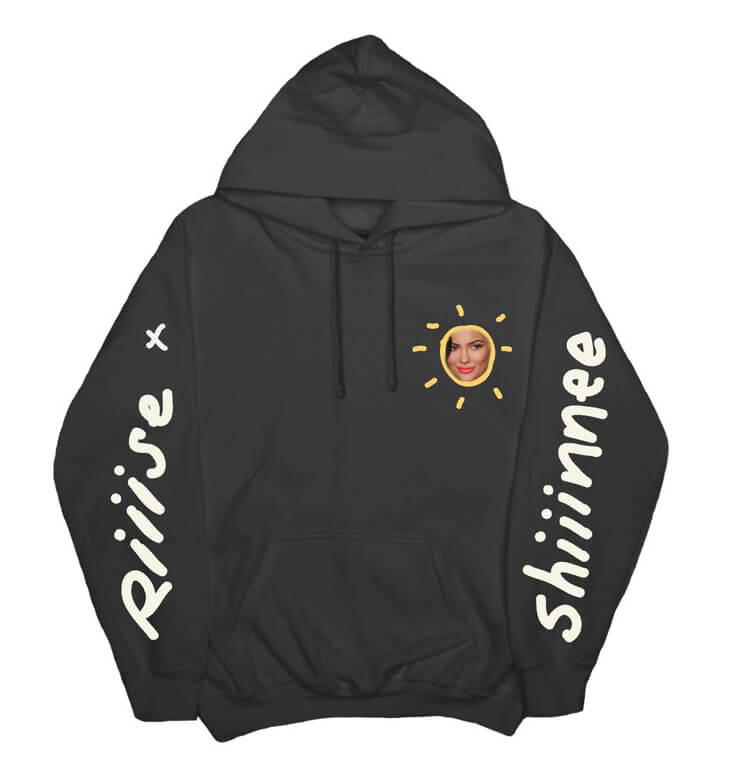 The phrase went viral after a video where Kylie sings her daughter. Source: kyliejennershop.com/

In pop-culture, politics, and sports it takes just a second to set social media on fire. It creates a new hot market. Entrepreneurs who are able to identify those events and react fast can capitalize on the buzz. We expect every meme to have its own T-shirt next year. And it looks like Amazon is looking forward to it too.

With tech companies tapping into the merch market, customization becomes more possible. It’s okay if not everybody getting the same and it’s even better when your band tee is one of a kind. English band Bring Me the Horizon has an unusual store to illustrate the tendency. Their website analyzes your Spotify data and generates a unique design.

We’ll also see more options for apparel cut, more fashion-forward blanks and maybe even cut-and-sew options. We believe that customization and the ability to produce on-demand will become massive.

It looks like no business or celebrity can exist nowadays without their own merch. Museums and fast food chains alike adopt it in their marketing plans and we saw the news about church merch hitting fashion points. Even Billboard opened a merch shop this year, not even talking about numerous YouTube and Instagram influencers. Everybody has something to express with a T-shirt.

Our wardrobe may consist of only branded apparel soon enough. By choosing an outfit, we’ll decide who we support today. Is it McDonald's, the Metropolitan Museum of Art, a presidential candidate, Batman, or Kanye West? Since any clothes have the power to make a statement, merch just makes it more visible and obvious. Plus, since we will need to make this choice every day, brands and businesses will only become more creative in attempts to capture our attention.