Billie Eilish Hoodie. An Outfit For The Unique Vibe 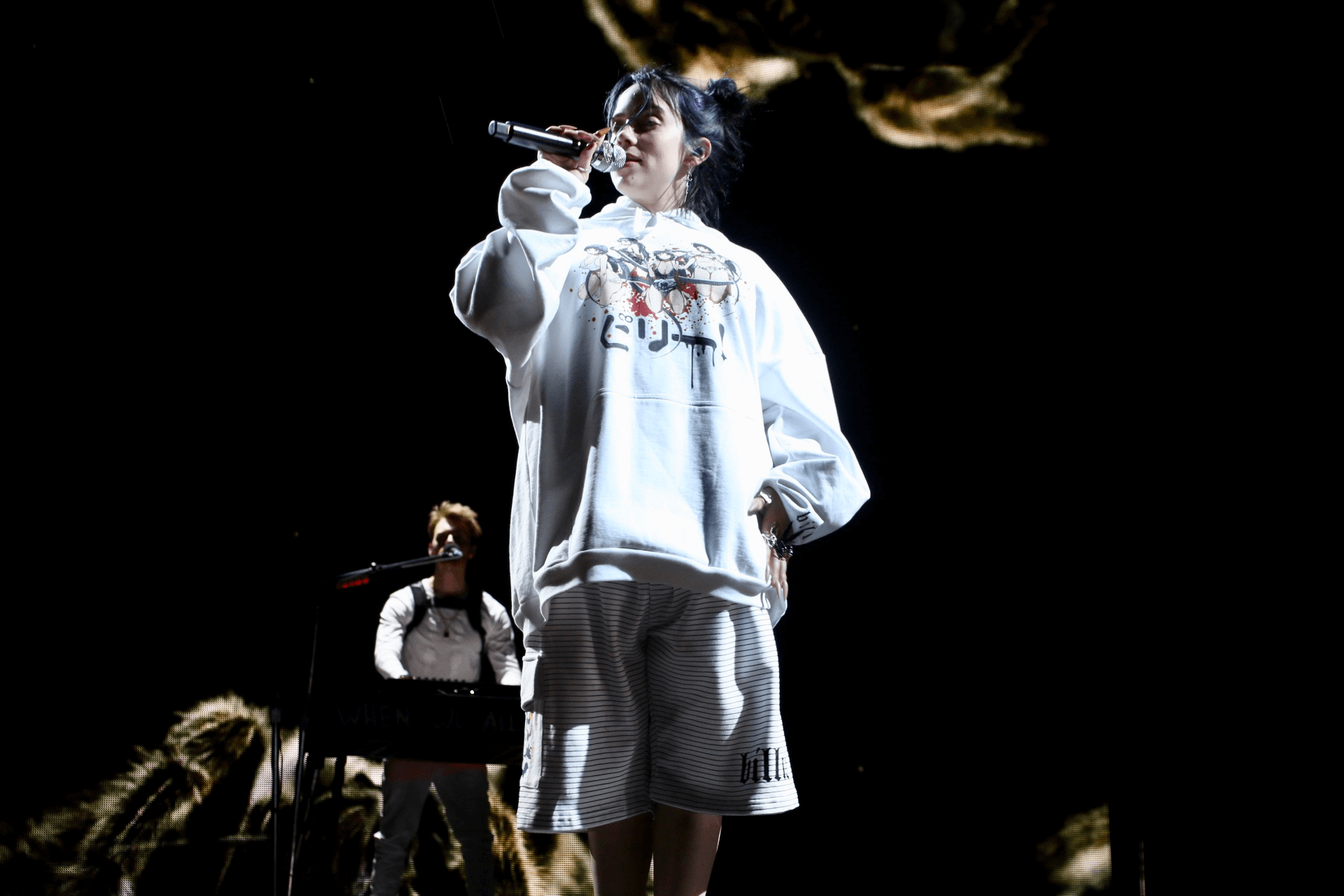 She’s so Generation Z that millennials feel ancient next to her. Billie Eilish is the first artist born after 2000 to score both a chart-topping hit and album on the Billboard lists. Aside from being the most sought-after pop star of the year, she’s also the youngest to earn six Grammy nominations, including all the top categories. Her music sounds dark and weird, her style looks baggy and unconventional, and her videos are aggressive and intense, but Billie herself appears to be quite a nice kid.

She inspires millions of teens with her music, her clothes, and her attitude. We looked for the most signature Billie Eilish hoodies for you to wear in support of your favorite artist.

Billie Eilish Pirate Baird O'Connell was born on December 18, 2001, in Los Angeles. Her parents used to be actors and her older brother, Finneas, was a teenage actor in the TV shows Glee and Modern Family. 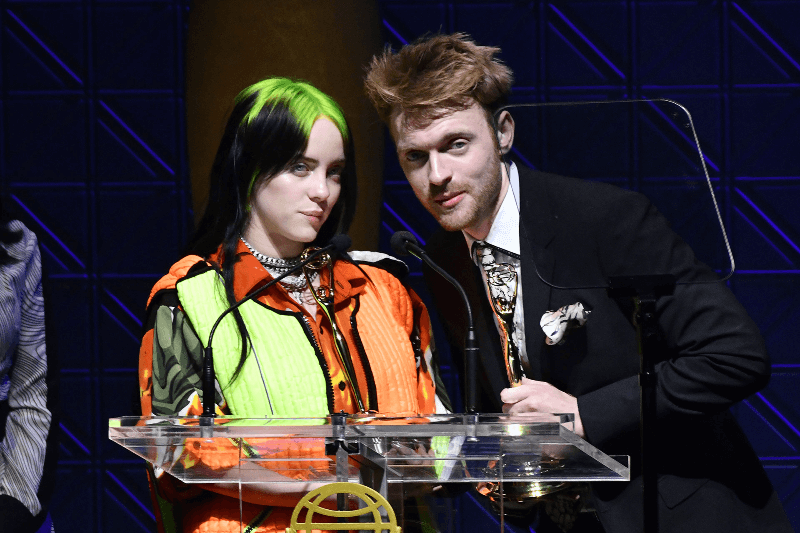 Billie had always been a creative kid. She wrote her first song on the ukulele at four, was performing at talent shows at seven, and joined the prestigious chorus at eight. Her hobbies included photography and video making. She danced seriously for several years but had to quit because of an injury at 13. At 15, Eilish passed her high school equivalency exam - she and her brother were homeschooled by their parents.

As the siblings grew up, they started to create music together and record it in Finneas’ room. Eilish’s meteoric rise started in November 2015, when she uploaded a song on SoundCloud. It was a ballad, "Ocean Eyes", written and produced by her brother. Overnight, the recording went viral and Billie began to receive offers from recording labels. Industry professionals tried to set her up with renowned producers and record in a professional studio, but Billie and Finneas choose to work on the debut album at home. It did not hinder them in conquering the music world. “When We All Fall Asleep, Where Do We Go?” became the biggest album of 2019, according to Billboard, with 14 songs in the Top 100 in the first week.

Billie Eilish’s other accolades include eight gold and four platinum singles in the US, two American Music Awards, three MTV Video Music Awards, two Guinness World Records, and six pending Grammy nominations in the most prestigious categories. She performed an acoustic set at a Chanel event and played the first-ever pop concert in Apple’s theater. Her estimated net worth is five to six million dollars.

In the show business world, where all commercially successful hits are produced by the same dozen professionals, Billie’s music is exceptional. Her songs are darker and weirder, with nary a piece of mawkishness. Surprisingly, this is what makes the singer a role model for teen girls - especially for those who don’t fit. She’s stylish, independent, and not afraid of being outrageous. But, most importantly, she’s genuine in pursuing what makes her happy.

Talking about inspiration, Billie says she loves hip hop and cites Tyler, the Creator, and Childish Gambino. However, she also admits that Amy Whinehouse and Lana Del Rey influenced her singing style.

The O’Connell siblings are genre-omnivores. They combine bouncy pop with non-musical noises, skittering beats with dramatic vocal confessions, minimalist samples, and sing-songy rap. This music is weird and catchy. It’s beyond any boundaries.

Fame obviously comes with a price. Still a teen, Billie spends a lot of her time on the road, away from her friends. She was suffering from anxiety attacks and had to see a therapist. In photos, she rarely smiles. However, people who met her in person say she can be funny and mischievous. She doesn’t drink or do drugs, unlike many other teen stars, and her album has not a single curse word in it.  She might be a “bad guy” on stage, but she’s also a good kid. 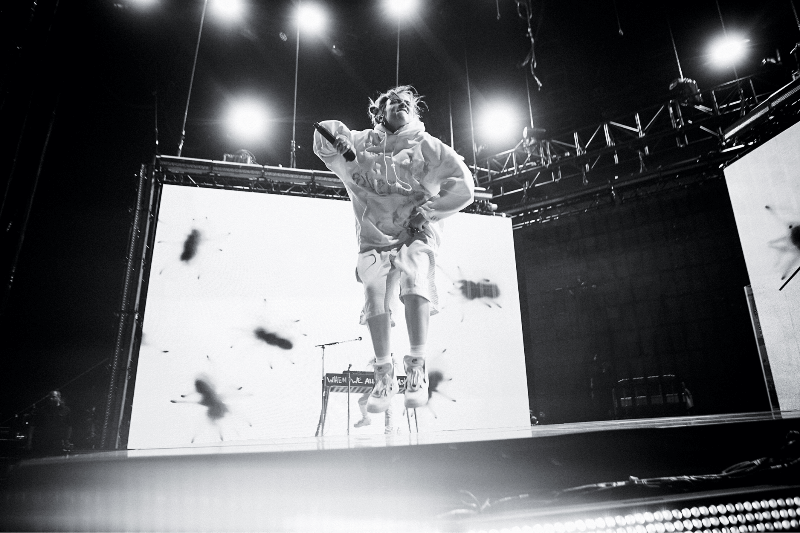 Billie Eilish’s most common stage costume is an oversized hoodie, wide shorts, and white Air Jordan sneakers. With that seemingly nonchalant appearance, she is the most-googled style icon of 2019. Her swag-and-comfort outfits, neon-dyed hair, and two-inch acrylic nails drive as much media attention as her music.

Back in 2017, the singer stated that she chose to dress out of her comfort zone to be different from others. “Looking memorable”, according to Eilish, makes people believe that she’s important and listen to what she says. She’s great at mixing designer prints and making sunglasses look cool inside. For example, at the American Music Awards ceremony, she donned Burberry head-to-toe, including a straight-off-the-runway crystal hoodie. 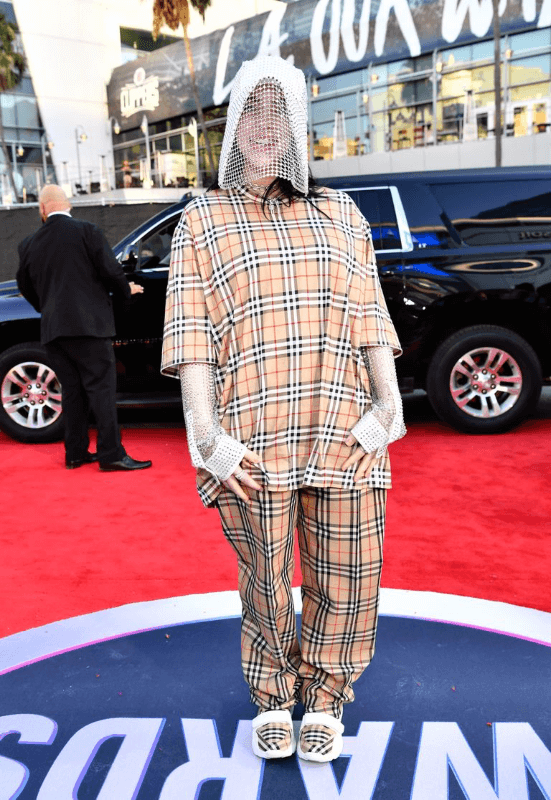 In 2019, Eilish appeared in the Calvin Klein ad campaign “I Speak My Truth in #MyCalvins”, where she explains the idea behind her baggy looks. This is her way to avoid judgments of her body: "Nobody can be like, 'She's slim-thick,' 'she's not slim-thick,' 'she's got a flat ass,' 'she's got a fat ass.' Nobody can say any of that because they don't know." Now we know that she puts the ill-fitting clothes on deliberately.

Her style is recognizable: it’s anything but casual. Her aesthetic includes huge matching tees and shorts, massive parkas, crazy sunglasses, and a lot of massive silver accessories. However, Billie told Elle magazine that she’s gonna change when she turns 18. This year, we might see the “Bad Guy” singer rocking more sexy and feminine looks. 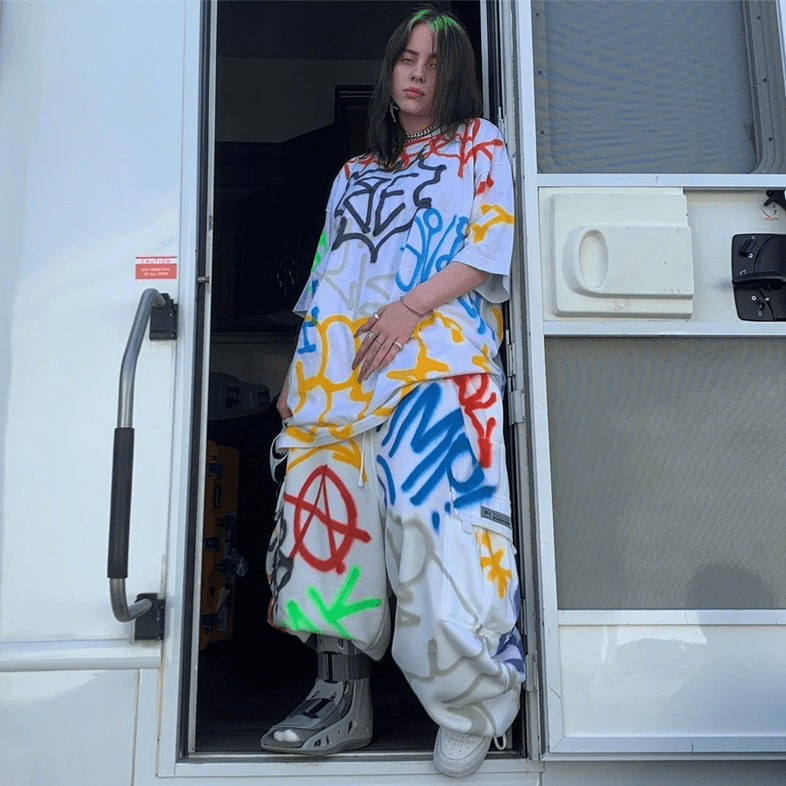 Where to Buy Billie Eilish Hoodie

Although Eilish herself prefers custom designer pieces, she’s got her fans covered. The singer made it easy to follow her iconic baggy style with dozens of fashion collaborations and merch lines.

If you want a piece of Billie’s style, check out her official shop first of all. Some pieces are sold out, many are available for pre-order, but you might be lucky enough to catch an in-stock hoodie. This red one, for example, costs $65 and is bundled with a digital album. 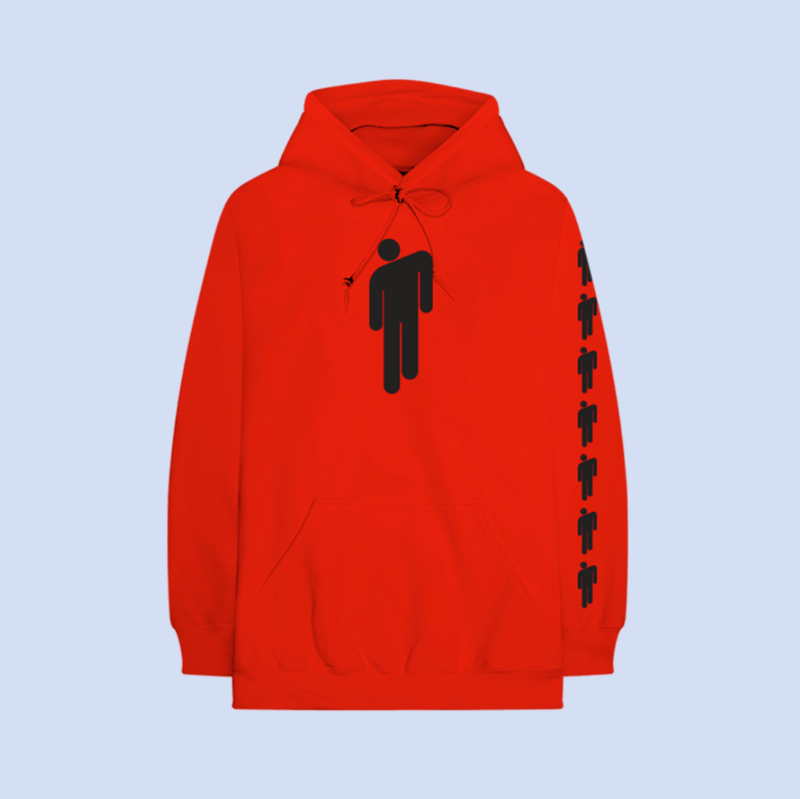 This fall, Billie released new merch ahead of her world tour which starts in March. She announced the drop in her Instagram stories to almost 50 million followers - and some items were sold out immediately. The collection featured the iconic Blohsh figure (like the hoodie above), embroidered beanies, genderless hoodies, and long-sleeve shirts with lyrics. Since November, some of this merch has been available exclusively on Instagram through the new Shop feature. For her 18th birthday in December, Billie restocked the bestsellers in her online store. 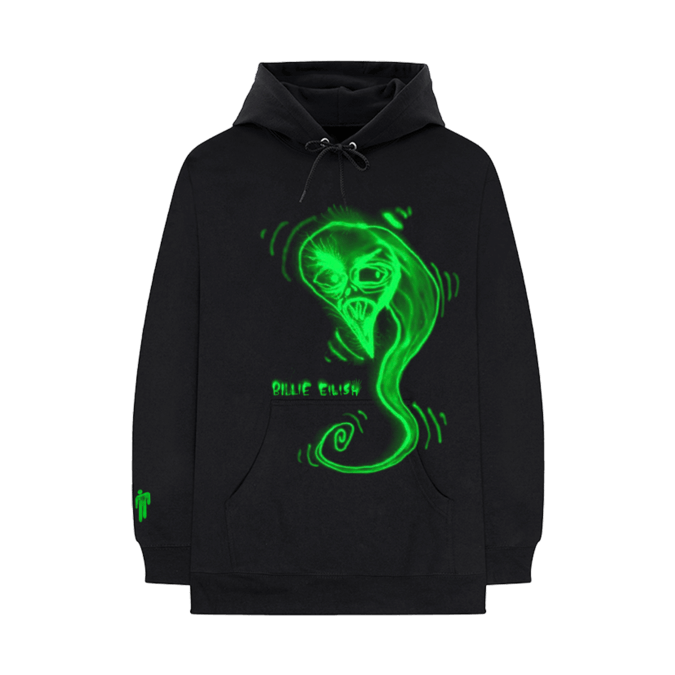 By the end of last year, Billie had also released a merch line for kids and infants. It includes miniature bright lime hoodies and toddler beanies rocking the signature neon graffiti aesthetics.

Besides her own merch label, Blohsh, Billie has been dropping numerous collaborations throughout 2019. For example, after she worked with Japanese director Takashi Murakami for a music video, they also released a highly coveted clothing line inspired by "you should see me in a crown". The collection includes hoodies, t-shirts, and accessories with Murakami’s illustrations. If you want to wear a cartoon representation of your favorite star, this hoodie is your must-have. The drop was officially available for a limited time only and can now be bought on resale websites like Grailed andStock X. 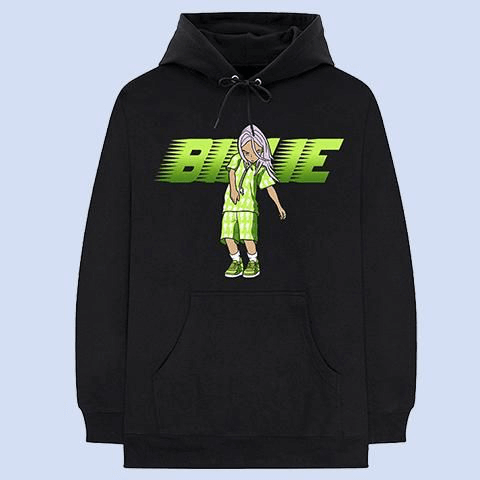 Last year, Billie starred in the MCM FW19 campaign and then collaborated with the brand for a vegan collection. The drop, which included oversized unisex hoodies and a couple of long-sleeve tee-shirts, was available at a pop-up event in Berlin in September. 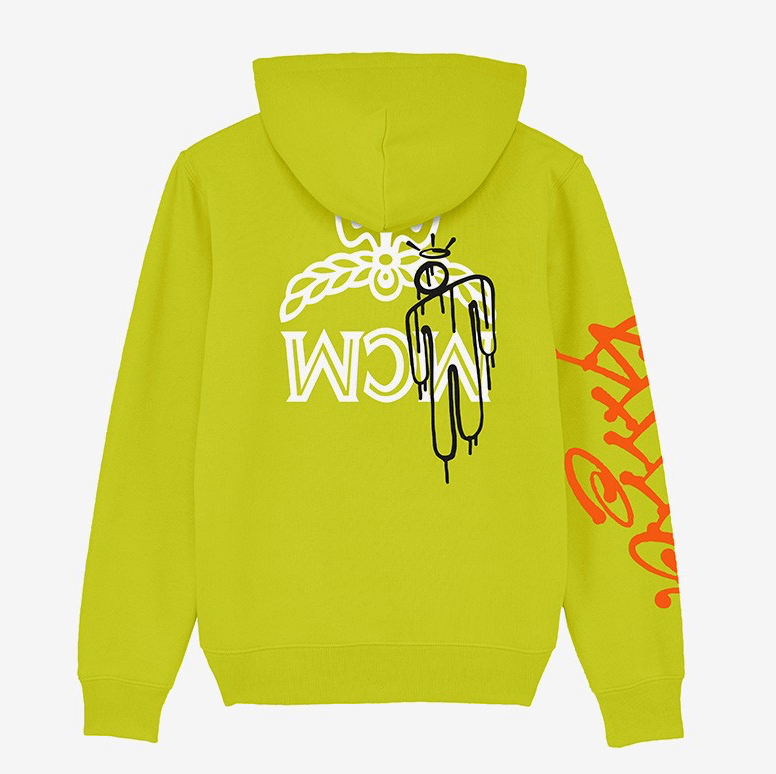 The pop star has also worked with several mass-market retailers like Bershka, Urban Outfitters, and H&M. The companies made full collections inspired by Billie which are still available online and in numerous shop locations. The prices are lucrative and, of course, all the pieces are infused with the “bad guy” signature style: extremely long hoodies, boxy shorts, and wide tee-shirts with a lot of graffiti. The Urban Outfitters line also includes a couple of unusual accessories, like ski and face masks and bucket hats. The H&M collection is not only edgy but sustainable. Neon colors are, obviously, everywhere. 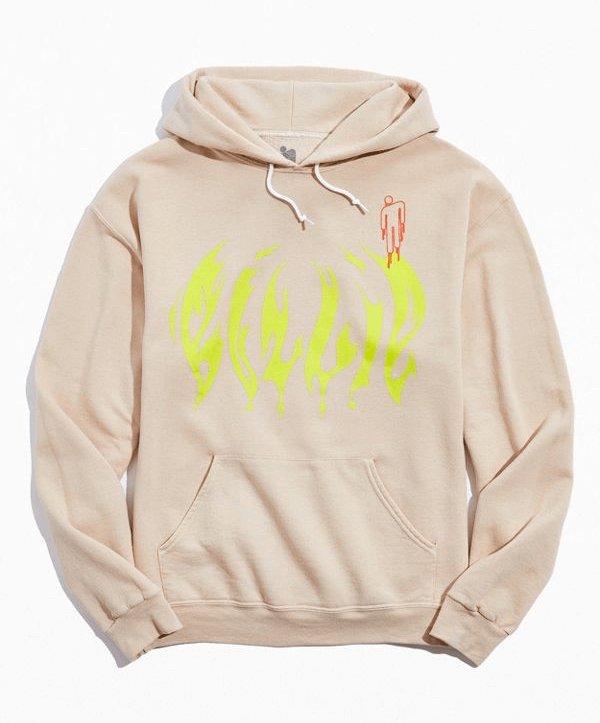 Billie Eilish is an idol with which Generation Z can identify. Not only is she the biggest breakout musician of 2019, but she also manages to stay true to herself with both her music and her style. No wonder millions of young people want to dress like her. We’re in the era of baggy neon hoodies and we actually love it.