Trump 2020 Hoodie. A Revolution In A Political Swag 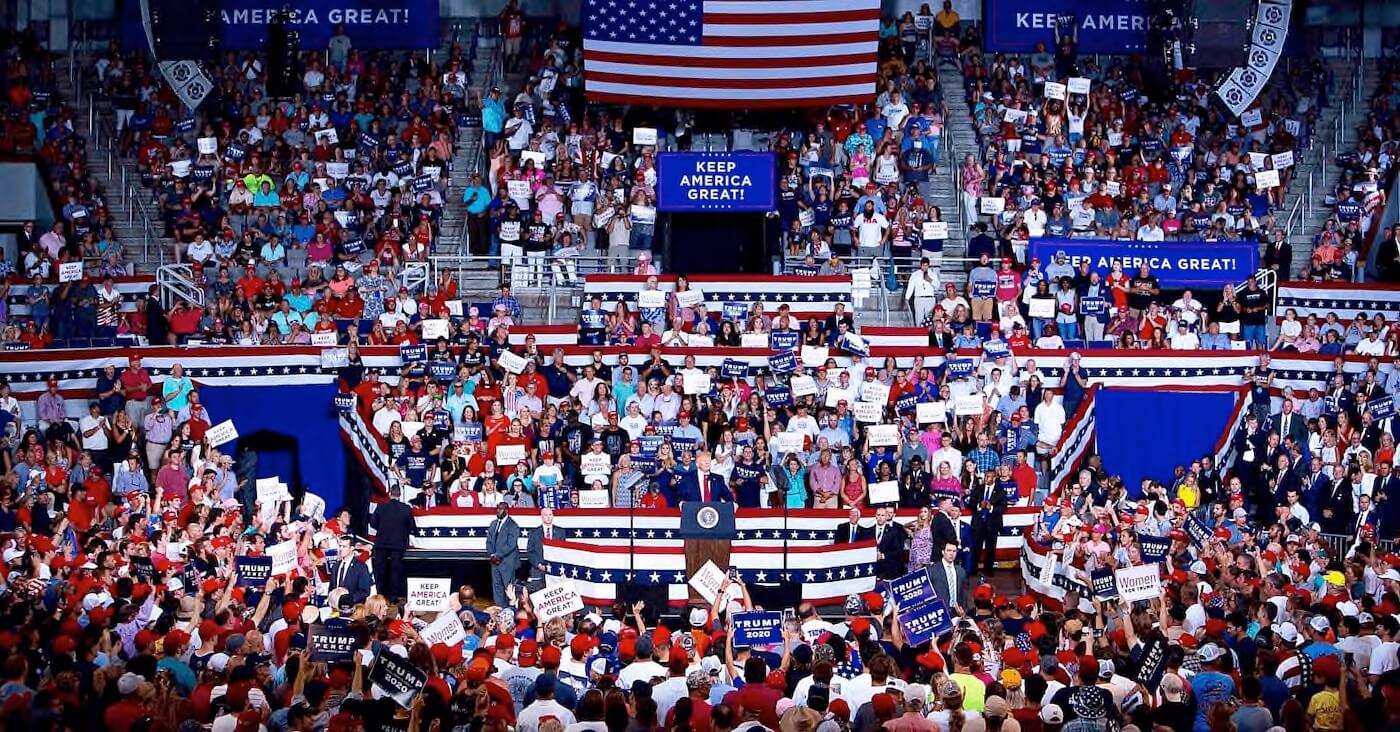 With the US presidential election 2020 getting closer, we have more and more information to proceed. Candidates devise sophisticated schemes to get voters’ attention, as well as money for the campaigns. Selling merchandise is one of the techniques to get both. The politicians’ web stores have a huge variety of goods. That swag is weirder than ever: from cups for tears to shirts in hideous colors. But these chuds can hardly surpass the omnipresent nature of the hoodie, perfect apparel to carry any message.

As for now, we do not know who’s gonna represent the Democratic party, there were more than 20 people running for the nomination. But we already know that the current US President Donald Trump will most probably be the opponent. He has started the re-election campaign on the day of his inauguration. Which means, his merch shop has never closed. It just restocked with the new 2020 slogans "Keep America Great" and "Promises Made, Promises Kept".

Though it was the red MAGA cap, that made a revolution in a political swag in 2016, Trump 2020 hoodie might be the real game-changer this time. 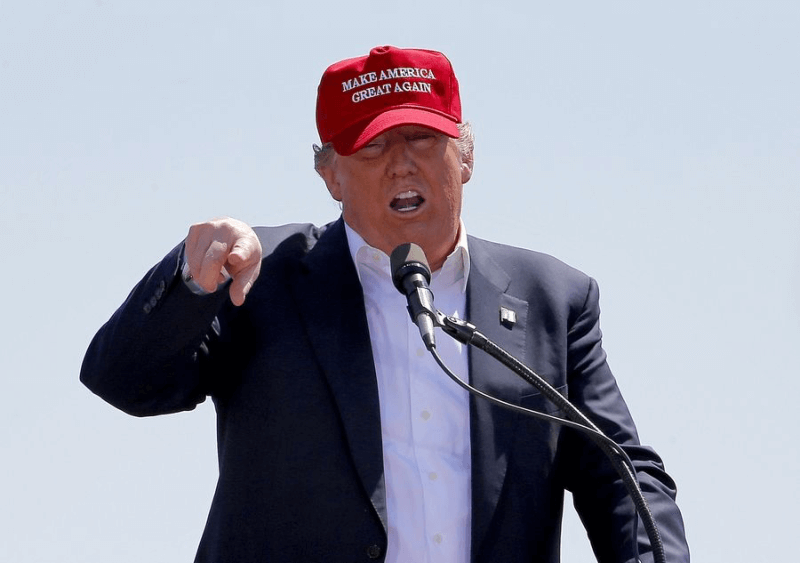 Trump wearing his MAGA hat. His campaign reports selling more than a million of them. Source: Daily Herald

How Does Political Merch Work?

Merchandising has always been a part of American political life. Presidential runs have been selling buttons and pins, posters and shirts since the mid-nineteenth century. But today it’s a huge industry. No campaign website goes without a shop section that hawks apparel, gifts or novelty items. Many candidates often appear wearing their own hoodies or shirts.

Wearing a campaign tee means fusing your identity with a person you admire. It is a declaration of your views, values, and beliefs. For example, a Trump hoodie signals your support for the incumbent president and his policies. But for politicians, selling merch is much more than providing voters with eye-catching gear. It is an additional fundraising opportunity, a tool to collect data about their supporters, and also a way to maintain control over their image.

Political merch is now more powerful than ever. Candidates are searching for bold slogans that people would love to wear on their chests. Thus, one of the Democratic frontrunners Elizabeth Warren wants to present herself as a friend of the working-class by selling mugs with “Billionaire Tears.” Her hoodies also criticize the reach people rule, saying, for example, “Capitalism without rules if theft.” 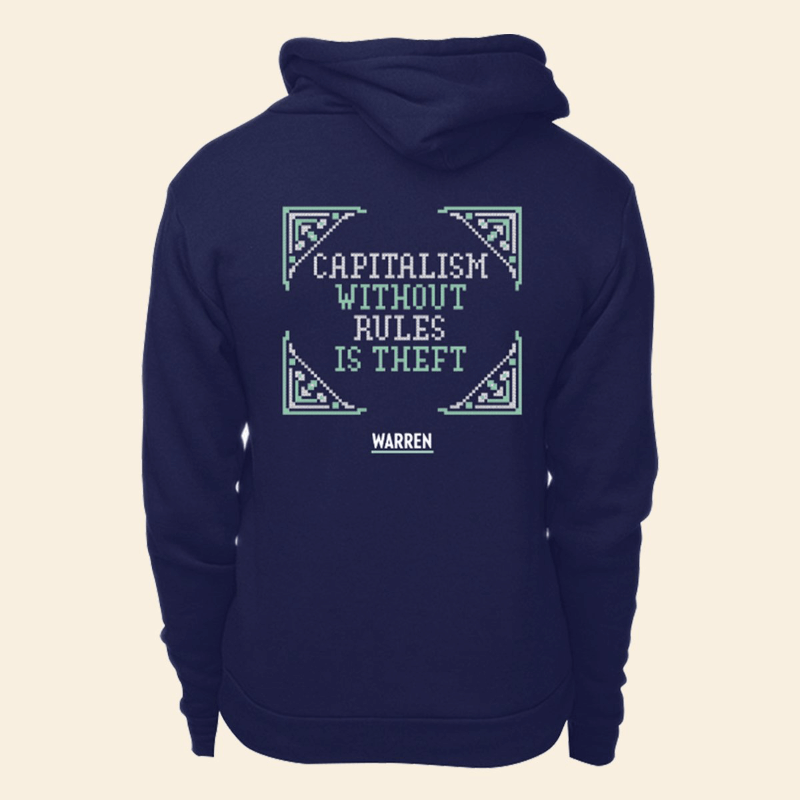 Each hoodie sold for 50 bucks is considered as a unique donation to the runner’s fund, and the Democratic party rules require at least 130,000 of them to qualify for the next debate. In 2012, Obama’s office reported that merch added $40 million to the campaign fund. In 2018, Trump secured 30 percent of the contributions to his fund by selling merch. The campaign of Democrat Andrew Yang recently reported that it has collected over$1.2 million by selling hats that say “MATH,” meaning “Make America Think Harder.”

The enormous popularity of campaign merchandise reveals the division of American society by partisanship. It’s becoming a “red team vs blue team” world with everyone showing which team they are in.

But the ultimate goal of campaign shops is information. Voter’s data like email, phone, and addresses, gathered with each sale is a valuable asset.

The American political system inspires a cult of personality. And Donald Trump is probably the strongest brand in this scene today. He puts his name on a lot of things. His merch store sells not only traditional apparel and accessories pieces: it has 14 pages of goods raging from Christmas sweaters to wrapping paper, plastic straws and a tree ornament. Not only he put slogans on this merch, but Trump also adorns cups and t-shirts with his tweets and unhinging statements. 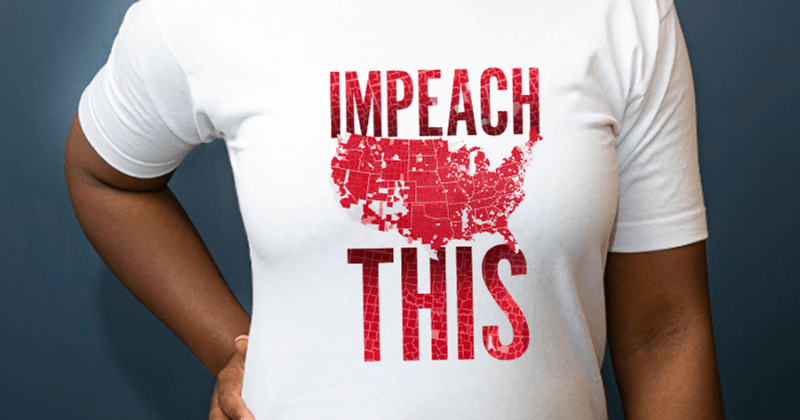 Impeach This Tee from shop.donaldjtrump.com

Trump extensively uses the shirt-of-the-moment approach to fuel his campaign. He is not the only one to do so, but probably the most successful one. His team creates merch for every controversial event and as an answer to every accusation. There is always a new merch a supporter may want. Looks like the strategy is working. Trump-branded straws, a protest against paper straws, have raised about $1 million. 40 percent of the orders were placed by new donors.

Not Only Politicians Sell Political Merch

There’s a lot of money to be made in political merchandising. Before Trump, this swag was in demand in Washington only at the time of inauguration. But today it is sold continuously. A lot of enterprising individuals started to sell merch for presidential hopefuls on the Internet, at fairs, and pop up stores. And Trump branded stuff is the bestseller. Anyone is allowed to put a picture of the president or his words on a tee-shirt and have a nice profit in the right location. 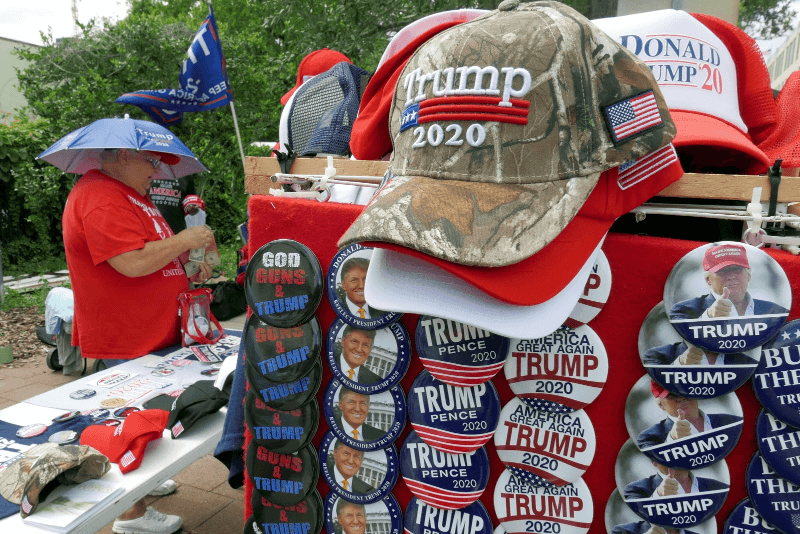 There are even some unaffiliated retail stores in malls. However, since mall management does not like the controversy, they have both Republican and Democratic gear in stock. It creates an eclectic picture, where shirts for Joe Biden and cups in support of Elizabeth Warren adjoin Trump hoodies, hats and banners. 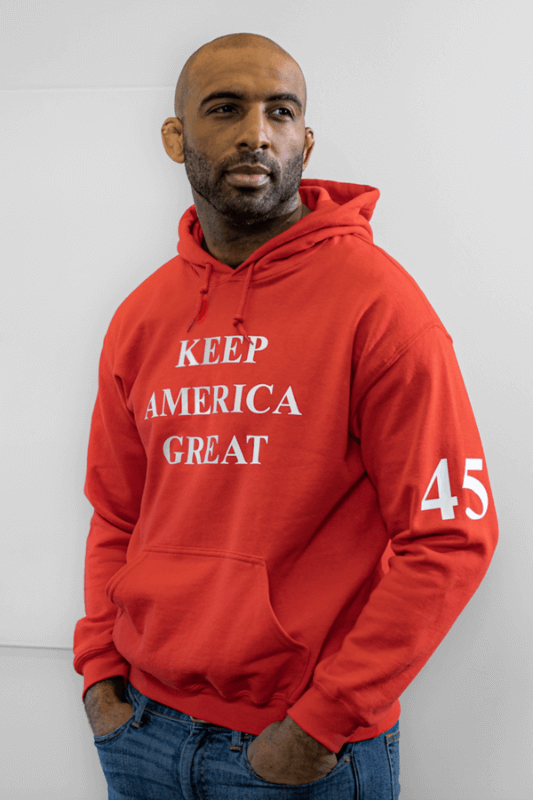 Official Trump’s campaign merch store would be incomplete without a hoodie or two. This one has a simple design with the slogan on the chest and a number 45 on the sleeve (Donald Trump is the US 45th president). The item is available in red and navy blue. Like all the merch here, it is manufactured in the USA. It is less controversial than most items in this shop, but still bold enough to show your support and demonstrate your position. 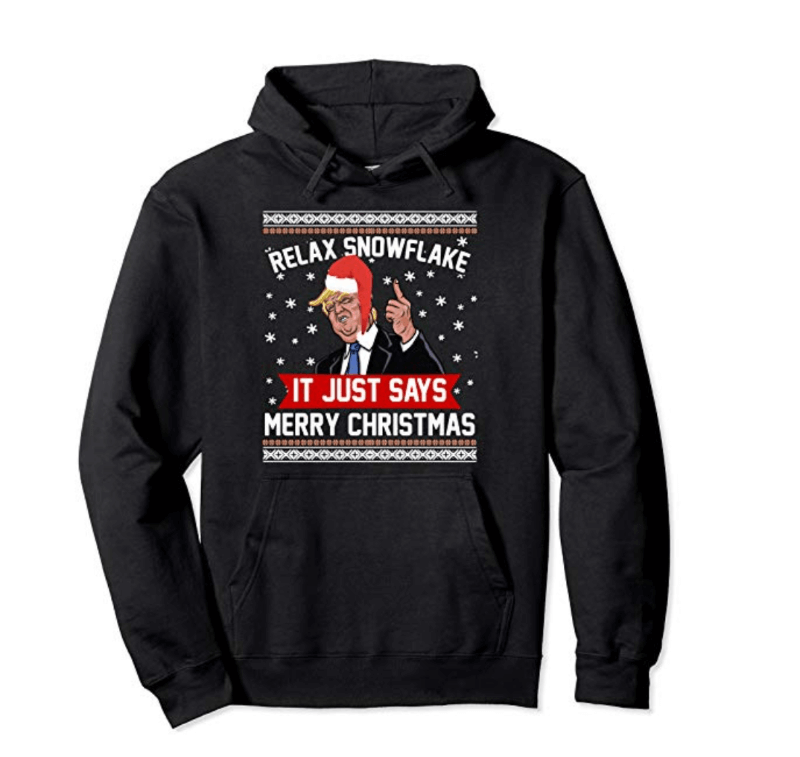 Amazon is unsurprisingly blooming with Trump apparel. The US president is an inexhaustible source of sarcastic memes and sharp statements. Businessmen use them to put on clothes with a slight touch of creativity and a big dose of irony. This trolling hoodie is making fun of the controversy of political merch. And it totally fits in the category of ugly Christmas sweaters, if you are looking for one.

The hoodie is available in black, grey and blue. The material is cotton and polyester blend. 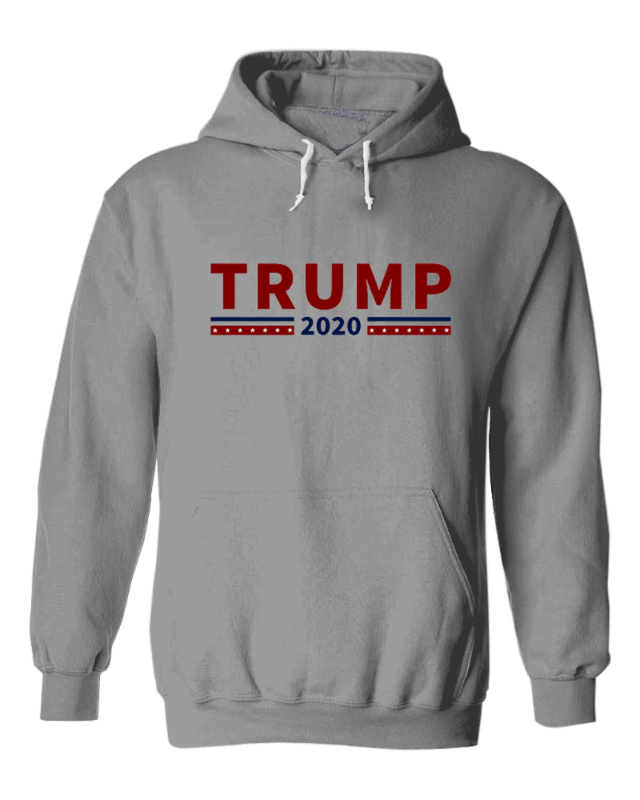 The shop called Patriotic Depot is clearly owned by Trump’s supporters. This simple grey hoodie says that you want the current president to stay in the Oval Office for another four years. It will help you to find your like-minded people but might as well get you in trouble.

4.  Finally Someone With Balls Hoodie 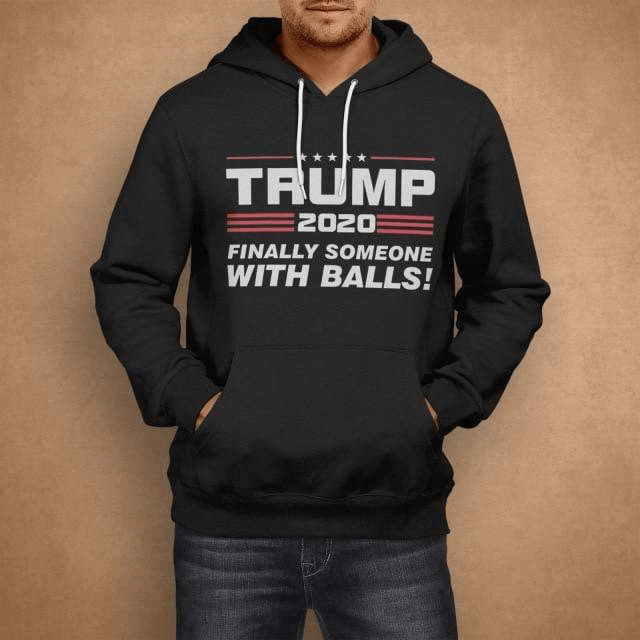 A hoodie made of a political meme, implying that Donald Trump is a much stronger leader than other presidential hopefuls. It has contrast drawstrings and a front pouch and is made with polyester and cotton. The fit is regular unisex. The shop offers sizes from XS to 4XL. You’ll definitely receive a lot of comments while wearing this Trump 2020 hoodie. 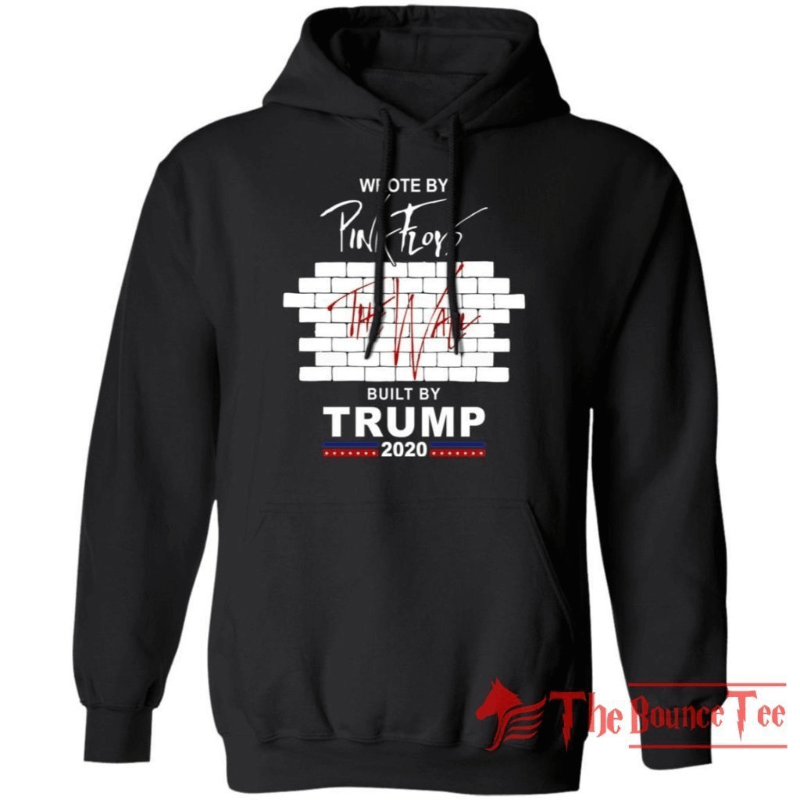 This hoodie unites rock and the president. The design “The Wall wrote By Pink Floyd built By Trump 2020,” implies about the wall Trump argues to build on the Mexican border as a part of his protectionist policy. This hoodie is made in the USA and printed to order. It is a soft cotton/poly blend with a low-pile surface. The fit and sizing are unisex. 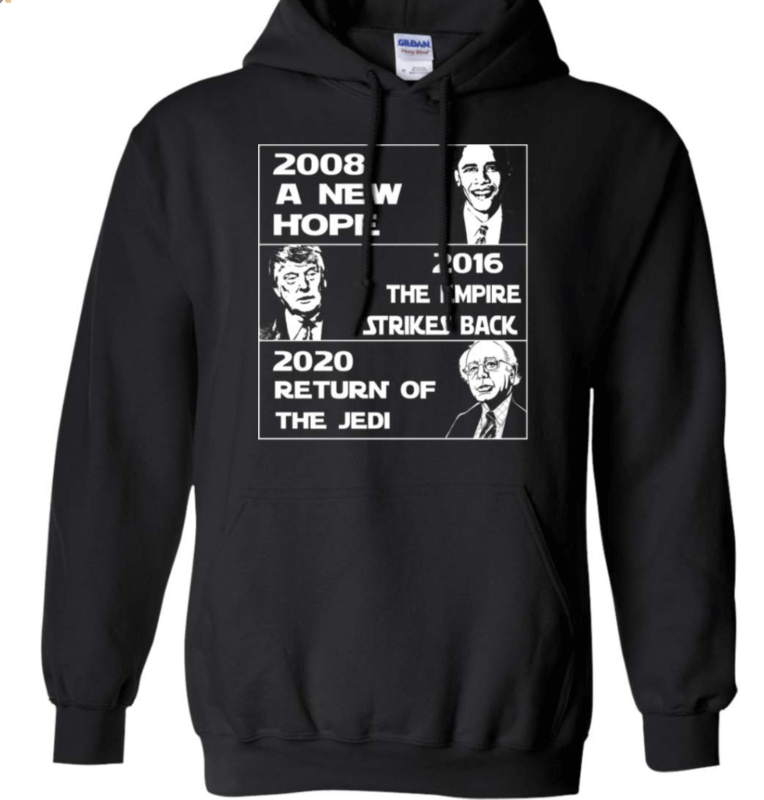 This hoodie features Donald Trump but differs from the others in this list. Using the Star Wars allusion, it supports Bernard Sanders, one of the Democratic presidential hopefuls. The design says that Barack Obama was “the new hope” in 2008, then in 2016 “the empire strikes back” with the election of Trump, and 2020 will be “Return of the Jedi” if Sunders is elected. This is also the cheapest piece in this selection. 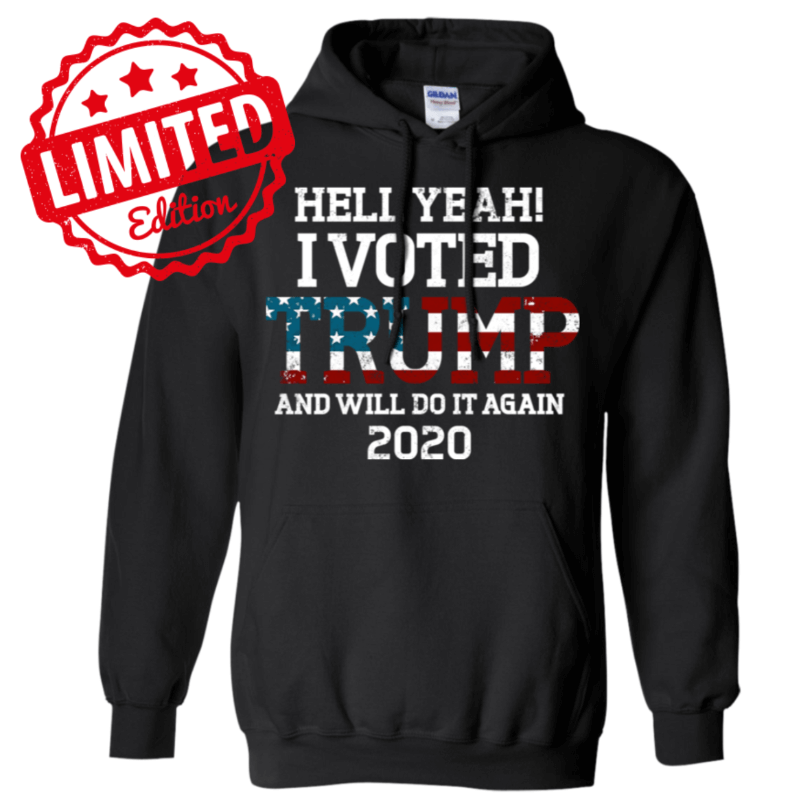 A hoodie for the most ardent supporters of the current president, who chose Trump in 2016 and are going to vote for him again this year. It is available in sizes from XS to 5XL. Suitable for spring and autumn, lightweight cotton/polyester hoodie features double-needle stitching and a front pocket. The quantity is limited. Or the web site is using a rush marketing technique.

Political hoodie is an easy way to showcase someone’s ideology, views, and values. You can show the world who you are by wearing the merch of people you admire. Today, people cherish their political allegiance in a way once reserved for a favorite sports team or pop star. No wonder it Trump 2020 hoodie can make a nice Christmas gift for someone.

Donald Trump is renowned for his ultimate swag and bold marketing decisions. His 2016 "Make America Great Again" hat is still popular among his supporters. In a way, it is a part of his populist strategy. But it definitely works, and other candidates are trying to make their brands as bright as possible.

All the runners in the presidential race want you to buy their merch. But entrepreneurs also entered this game. Unofficial political merch sites and pop stores booming even more than campaign pages.